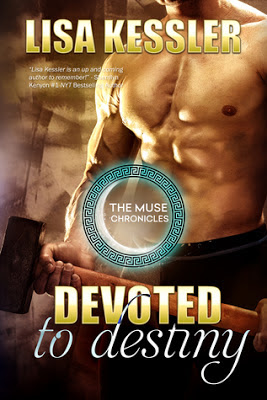 Mason Knowles is a carpenter with a secret. He's a Lycan, cursed by Zeus to shift into a wolf. With each transformation, the curse becomes stronger, threatening the man to succumb to the animal forever.

Clio Clarke is the human vessel for the Muse of History, devoting her life to studying the past. But when destiny brings Mason into her present, Clio realizes she still has plenty to learn about love and trust.

Mason discovers he's Clio's Guardian, gifted with inhuman strength, however, it will take more than might to stop an immortal from hurting her. He'll sacrifice anything, even his own humanity, to keep her safe, but this shift could be his last.

I’m a huge fan of Lisa Kessler’s Muse Chronicles series. Unlike the two previous books that required you to read them in order, Devoted to Destiny can be a standalone read. However, you will get information from the previous books that could be considered as spoilers.

Devoted to Destiny shows the power of characters. It’s been stated by Lisa that Clio Clarke, the Muse of History, wasn’t supposed to survive one of the previous books. But she and her hero perservered. That strength and determination is on full display in this story. I found Devoted to Destiny to be so different from the previous books in this series. For starters, Mason Knowles is aware that muses are real and that immortals walk amongst us. Secondly, Mason has been bestowed the ability to shift into a werewolf. While Clio tends to use her books as shields to protect herself from the rest of the world, she carries the spirit of a lion inside of her. Together, these two are fun, playful, and passionate. They have a huge need to protect and stand by each other.

I’ve stated in the past that Breath of Passion and Light of the Spirit were game changers for this series. I don’t truly think the same can be said for Devoted to Destiny, but that doesn’t mean that what happens within the pages of this book doesn’t contribute to the overall story arc of this series. In fact, I believe the events from this book will have a huge impact on the rest of the series. I just have no idea what that impact truly is. I just know the Gods and muses are in near proximity to each other and a war of epic proportions is brewing.