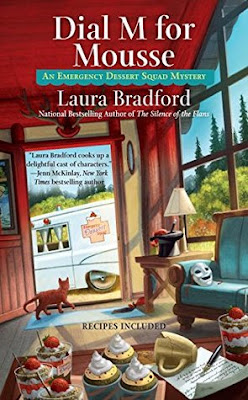 Murder takes the cake in an irresistible Emergency Dessert Squad mystery from the national bestselling author of The Silence of the Flans.

The Emergency Dessert Squad business is booming, with owner and baker Winnie Johnson working overtime to satisfy the emergency cravings of Silver Lake, Ohio. Her latest order, a plate of motivational desserts for an artists' retreat, is just what she needs to keep her mind off her own relationship woes.

But Winnie's problems seem like trifles when she discovers the body of retreat owner Sally Dearfield mere inches away from five oh-so-eccentric and viable suspects. Now, this baking detective must uncover the inspiration behind Sally's murder before another creative genius is iced.

Laura Bradford has woven together a really nice mystery with Dial M for Mousse, the third book in her Emergency Dessert Squad mystery series. The story finds baker and small business owner Winnie Johnson still dealing with a lack of private time with her boyfriend Jay. Plus, his sixteen-year-old daughter doesn't like her and is trying to break them up. Only this time, Jay and Caroline are spending time together with his ex-wife halfway across the country. While Winnie is in a relationship holding pattern, she stumbles upon her next murder. While delivering five motivational inspired desserts to a poet, a magician, a mime, a comedian and a puppeteer, Winnie and her best friend/assistant Renee come upon the dead body of Sally Dearfield, the owner of Silver Lake Artists’ Retreat. Winnie thinks the murder scene was staged and that the five entertainers are playing her and Renee. She vows to figure out which one is the killer.

I found Winnie’s ongoing relationship struggles with Jay and his daughter to be tiring. Truth be told, it took away from my reading enjoyment. After all, there is another man who seems to be more than happy to be Winnie’s love interest and he doesn’t seem to have any baggage. I did enjoy reading about Winnie, her neighbors Bridget and Mr. Nelson, Renee and them all attempting to solve the mystery. The twist and turns were great, and as usual, the little breadcrumbs used to throw the reader off definitely worked on me.

**Received a copy from Berkley Prime Crime and reviewed the book voluntarily.**

Éclair and Present Danger ~ Review
The Silence of the Flans ~ Review