Review ~ UNDER YOUR SKIN by Shannyn Schroeder 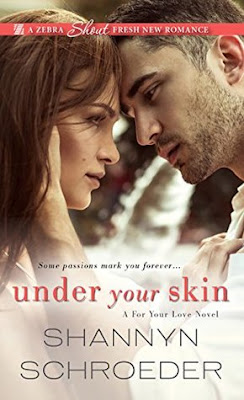 Blood Is Thicker Than Ink...

Norah O'Malley has been alone for a long time. It's been ten years since her father and four brothers shipped her off to be raised by her aunt. Seven months since she's seen the guy who got her pregnant--who still doesn't know. And it's two weeks since she came home to Chicago and discovered none of her family wants to talk--or listen.

She never expected to walk into a tattoo shop seven months pregnant and get her socks knocked off by instant attraction. She can't even see her socks. But Kai Ellis is big and gruff and sexy as hell, and if he has a past, well, so does she. Even more, Kai knows how to listen so that Norah feels just a little less alone...

All the chemistry in the world can't help Norah make her decisions. And no sizzle of desire will make Kai believe in happy endings. But a little time with someone who understands might just change everything...

Under Your Skin was a very entertaining book. It’s a slight departure from the books that I usually read. The heroine is a 22-year-old named Norah O’Malley. She moves back home and surprises her family with the news that she is 6 months pregnant. She has 3 older brothers and a father who are all over protective and not happy about her situation. After her mother died when she was younger, Norah was sent away to live with her aunt so she wouldn’t be negatively influenced by her older brothers. That’s ironic to say the least.

As Norah is trying to figure out her future, she ends up working for one of her brother’s bosses. His name is Kai Ellis and he owns the tattoo parlor where her brother works. Kai’s mom is recovering from surgery and Kai needs someone to look after her for a few months. Kai is a very complicated guy. He used to run with a gang and spent some time in jail. Now, he makes it a point to keep certain parts of his life separate from each other. Consequently, mixing business with pleasure is not his choice. He and Norah attempt to avoid their attraction for multiple reasons but eventually they give in to temptation. Norah’s pregnancy prompts Kai to pursue alternative ways to satisfy their sexual desires and that makes for some extremely hot interactions.

Kai and Norah are good for each other. Unfortunately, Kai doesn’t think that he is worthy of someone like Norah. By the end of the book, they have both decided to make some drastic changes to their lives that you may not see coming. I couldn’t help but root for their happy ending. They both have gone through a lot and deserve to be happy and loved. The supporting cast played a huge role in how everything turns out. I especially liked Kai’s mother. I look forward to reading the next book in this series.

Purchase Under Your Skin from:
Amazon | Barnes & Noble | Goodreads


The For Your Love Series:

Shannyn Schroeder is the author of the O’Leary series, contemporary romances centered around a large Irish-American family in Chicago and the new Hot & Nerdy series about 3 nerdy friends and their last spring break. When she’s not wrangling her three kids or writing, she watches a ton of TV and loves to bake cookies.
Places to find Shannyn Schroeder:
Website | Facebook | Twitter | Goodreads | Pinterest | Amazon Author Page