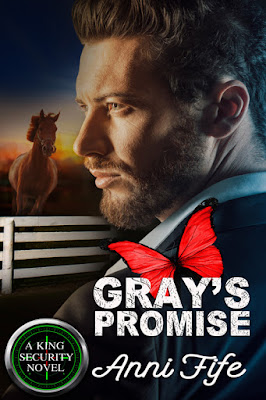 A jealousy that destroys everything in its path…a love that refuses to die.


Zoey Morgan seems to have it all as a successful surgeon in Boston. However, perfection lies only on the surface. Plagued by nightmares and amnesia from a tragedy that ripped her family from her fourteen years ago, she finds the courage to reach out to the only man who can make her feel safe. She’s buried the memory of their love, but her heart—and her body—responds to the ex-marine in ways that are all too familiar.

Grayson “Gray” Walker’s heart shattered when Zoey chose another man over him. Since then, he’s built an impenetrable wall around his emotions. But from the moment she implodes back into his life, her vulnerability breaches his defenses. His skills as an elite member of the King Security team cannot shield him from the devastation of learning he might have left Zoey high and dry when she needed him most. Now, Gray must navigate the tripwire of helping her heal while protecting himself from being hurt again.

As the embers of their potent love reignite, an old threat awakens, leading to greater danger than ever before.

Gray hands balled into fists. He wanted to punch the walls. “Take me to her. Now!”

“You need to control yourself, Mr. Walker.”

Rage joined the sick fear churning inside him and he glared at the doctor. She didn’t flinch. Her face held no judgment, but her steady gaze also gave no quarter. Gray found it anchored him, offering him no alternative but to deal with the reality slamming into him. The rigidity in his body eased. Doctor Wells nodded slightly, and in a cool, precise voice, continued. “Given Miss Morgan’s concussion and the yet unidentified drug in her system, we would prefer not to administer any more sedatives.”

The doors opened and they stepped out. She led them down another corridor and stopped outside a numbered ward. “Mr. Walker—”

“Okay, Gray.” She clasped her hands in front of her. “Zoey is extremely agitated. To calm her, you need to find the calmness within yourself.” Her probing stare insisted on a response.

“She’s on the edge of hysteria and in danger of hurting herself. If you cannot calm her, we will be forced to sedate her for her own safety.”

Gray’s heart hammered wildly. He closed his eyes, and for the first time since he’d raced into the ED, let her image surface.

His beautiful red butterfly. Mercurial and brilliant. Her dark-copper hair alight with so many fiery streaks, he was constantly amazed it didn’t singe his skin. The curly length was unexpectedly soft, so goddamn sexy when it slipped like satin through his fingers. But as much as he loved her hair, it was her eyes that endlessly beguiled him. Tapered like a cat, they were vivid-green with a golden ring around her pupil. A fascinating combination of sex-kitten and innocent, and such an integral part of her expressive nature. There were times he thought they were too large for her heart-shaped face, but then she’d laugh and they’d turn that intense jewel-like green. Wicked. Infectious. Or she’d whimper with desire, and the golden ring would leak into the green. Hot and slumberous. Untamed.

He opened his eyes, forcing Zoey’s image back into darkness. “Take me to her.” He met the doctor’s unblinking scrutiny. “Please.”

You can read Gemini’s review of Gray’s Promise here.

Anni Fife is an exciting contemporary romance author who has already made her mark in the popular genre of Steamy Romantic Suspense. Her debut novel, Luke’s Redemption, has been acclaimed by critics and readers and was a Finalist in the 2017 RONE Awards. Anni says she credits Kristen Ashley as her guiding inspiration, and strives to make her characters equally as heart-wrenching and unforgettable. She is currently working on Eva’s Peace (King Security Book 3).

Last year, Anni closed the door on a successful career in television production to fulfill her lifelong passion, writing. In the space of a month, she shut her business, packed up her city life, and moved to a small seaside village. When she’s not writing, she can be found on the beach searching for pansy shells, or drinking red wine and gabbing with her gal posse.

If you want to know when Anni’s next book is releasing and be first to get regular updates and BONUS TREATS, visit her website and sign up to join her POSSE.