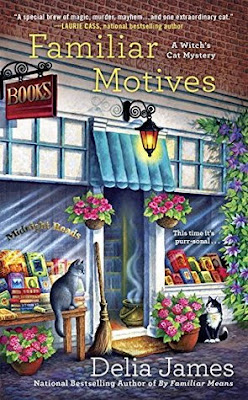 A new witch and her feline familiar get their fifteen minutes of fame in this enchanting mystery in the national bestselling series...

After learning that she comes from a family of witches--and adopting a familiar named Alistair--artist Annabelle Britton has made beautiful Portsmouth, New Hampshire, her home. Together with her coven, this good witch is trying to put a stop to magic and murder most foul.

When Anna takes Alistair to see local veterinarian Ramona Forsythe, they meet the most famous cat in town: Ruby the Attitude Cat, spokes-feline for a pet food brand. But then Ramona turns up dead, and Ruby goes missing. It seems like the murderer used magical means, so it's up to Anna and Alistair to catch a killer and cat-napper as only a canny cat can.

Familiar Motives is the third book in Delia James’s The Witch’s Cat Mystery series and is a standalone read. The mystery centers around the murder of veterinarian and fellow witch Ramona Forsythe and the disappearance of a local celebrity cat named Ruby. Ramona was cat-sitting Ruby, while her owner was out of town. Anna and her coven leader, Julia Parris, take it upon themselves to investigate the murder when they suspect magic played apart in Ramona’s death. But they have to be careful. While there is a witch coven in Portsmouth, New Hampshire, very few people know that witches exist. Anything they do or discover has to be easily explainable and believable by mere humans. This puts Anna and Julia at odds with sister coven witch Kenisha Freeman, the only witch cop in New Hampshire.

I felt the story moved slowly, thus not making this a page turner for me. There’s more going on inside the pages of Familiar Motives than meets the eye. However, I didn’t have this overwhelming need to see who the murderer was and why. Almost everyone involved in this story had a secret. That includes Ramona herself. Once the climax of the story was reached, things definitely got better. There was a surprise or two. But ultimately, this just wasn’t a story that I could really get into.

**Received a copy from Penguin Berkley Prime Crime and voluntarily reviewed the book.**