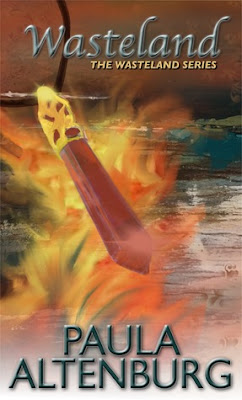 On the battlefield of the immortals, as hope springs from the ashes of destruction and despair, one man and one woman unite to set the world free.

Hunter is the Demon Slayer, a man without a past—and without mercy. Airie is the love child of two warring immortals. When Hunter is hired to bring a thief to justice, he’s forced to question everything he’s ever believed. And Airie, born on a world not her own and raised in a temple to be something she’s not, has to decide who—and what—she’s going to be.

Welcome to Wasteland. The Wild West comes to life in this dystopian fantasy series.

Wasteland is the first book in Paula Altenburg’s Wasteland Series. It is an interesting take on Gods and Demons or in this case, Goddesses and Demons. This is my first time reading this author and I was not disappointed. There is a lot of imagination. The writing is very vivid and the characters have enough depth and backstory to make them interesting and relatable.

Wasteland is the story of Hunter the Demon Slayer and Airie who is half demon/half goddess. In the world that they live in, goddesses ruled the land until they were overrun by demons. Priestesses were the servants of these goddesses and they still remain. Hunter is sent by an evil priestess named Mamna to recover a woman who is allegedly a demon spawn. That woman, Airie, turns out to be much more than the spawn of a demon. She is gentle, kind, and very naive. She had been raised by a priestess whom she believed to be her biological mother. She later finds out that her mother was a goddess and her father a demon. That composition puts her at odds with everyone. Fortunately for Airie, Hunter is suspicious about Mamna’s intentions so he ends up trying to protect Airie. He soon learns that Airie is a force to be reckoned with. Plus, he falls for her despite the fact that he is sworn to kill demons.

There is a lot that goes on in Wasteland. It’s a great depiction of the universal battle between good and evil. Plus, it tackles the concept of nature versus nurture. Airie may be part demon but she is a good person. She refuses to kill although she could do it with ease. After all, her father is the Demon Lord. Hunter has to toss all of his preconceived notions of demons out the window, the moment he sees Airie’s beauty. He didn’t even know that demon spawns could be female. Against all odds, Airie and Hunter establish a connection that can’t be broken and it’s easy to see how they fit together. There are other secondary characters in the book that also provide interesting perspectives to this story of Immortals. There are two other books in this series and I look forward to reading them both.