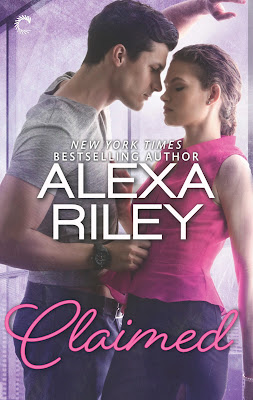 From New York Times bestselling author Alexa Riley, a friends-to-lovers romance that will bring you the happily-ever-after you’ve been waiting for.

Jordan Chen is the man behind the screen. As part of the elite security team for Osbourne Corporation, he has an iron grip on protection, all without having to make close connections with people. Until he meets the beautiful Jay, and suddenly his quiet life doesn’t seem so perfect anymore. He needs more. He needs her.

A workaholic to her core, Jay Rose doesn’t have a lot of men in her life. Smiling in the face of her enemies gets her the results she wants at work, but doesn’t exactly project a warm, welcoming vibe. So she’s surprised when the enigmatic security expert strikes up a friendship with her—surprised but flattered, and maybe a little bit turned on.

A company as powerful as Osbourne Corporation has powerful enemies, and when Jay becomes a target, Jordan realizes there’s nothing he won’t do to bring her home safe.

“There you are. Where’s my scratch-off?”

My dad smiles, and the lines around his eyes crinkle. He’s sitting on the back deck with the newspaper and a cup of coffee, his standard spot for Sunday afternoon. I finished up sparring with the guys and Paige, and headed out to spend the rest of my day relaxing with Dad like we do every Sunday.

I hand him his ticket, and he pulls a coin out of his pocket, kissing it before he starts scratching the ticket. I smile at him and shake my head. I guess we’ve both got our superstitions.

He doesn’t buy the scratch-off tickets himself, so I have to do it for him. I think it’s his own way of restraining himself, and this way he’s not responsible if he loses, I am. I come out to see him every Sunday, and this is always our routine. Sometimes I come home in the middle of the week, but he’s so busy that most of the time he’s not even home.

I’m lucky that my dad is still healthy and has a solid group of friends who keep him on the go. He’s got more going on his social calendar in one week than I do in a month. It’s nice not having to worry so much and to know that at least part of him is happy. I know he’ll never get over losing Mom, just like I won’t, but he’s been able to live his life, and that’s what she would’ve wanted.

When he’s finished scratching, he’s got a winner and slides it back to me. Then he puts the coin away and winks at me. “Press it for next week.”

I put the winner in my pocket and nod, knowing he’ll probably hit another then, too. The old man has more luck than anybody I’ve ever met.

Pop leans forward and looks over the top of his bifocals. “How’s our girl?”

I glance down at my watch and then roll my eyes. “That only took about five minutes this time.”

His smile widens as he waits for me to answer him. I ignore him and try to change the subject. He’s been on me about her for a while, knowing that I’m already in love with her. If it was up to him, we’d be married with grandbabies on the way.

“Your tomatoes are coming in.”

“Oh, she’s got you all twisted up today.”

I grip the edges of the chair and try not to let him bait me. Pop can be like a dog with a bone when he wants.

“Already got her eyes on someone else?”

“No,” I snap, and then realize I walked right into his trap. I let out a sigh and drop my head in my hands. “She’s fine. Still the same.”

“Ahh. You know, Jordan, I remember the first time I saw your mother.”

“I know, Pop. You were at the middle school dance and spotted her on the other side of the room. She was the new girl in town, and you wanted to go over and introduce yourself. The rest was history.”

He nods, then smiles and looks away, reliving the memory in his mind. There were times when he couldn’t recall it without tears, but the older he gets, the more the memories stay happy ones. I wonder if it’s because he thinks he’s getting closer to the time when he can see her again.

Once he comes back from the stroll down memory lane, he shrugs one shoulder. “There’s nothing wrong with being friends first. It just means the first steps will be the strongest. Take your time. But don’t take too long.”

Pop picks up his crossword and goes back to it while I sit there, silently brooding. He’s right, but he doesn’t know the whole story. Or who I’m even hung up on.

How can I explain it? I guess I could come out and say that I work with a woman so beautiful I can hardly look her in the eyes. That before she spoke a word to me, every cell in my body ached to reach for her. That she’s so utterly perfect, I’m not sure she even notices me like that.

I rub my temples and think about how I’ve been locked in the friend zone, with no means of escape.

Jay is the administrative assistant to Miles Osbourne, so essentially, she’s the gatekeeper for the entire company. If you need Miles, you go through her, but as the old saying goes: though she be little, she is mighty.

She’s small and perky, friendly to everyone she meets. But there’s a pit bull inside of her, and I’ve seen her take a grown man down a few pegs on several occasions.

The first time I saw her, I’d had to run up to the top floor to deliver some intel to Miles. Ryan, my boss, had asked me to run some documents upstairs because he was on his way out. It wasn’t anything above my security clearance, not that there wasn’t something I couldn’t find if I wanted to, so it was an easy drop.

When I stepped off the elevator, I saw her. And that was that.

One look at her and I heard the voice of my father echoing in the back of my mind. When you know, you know. That first glance at Jay, and boy, did I know.

It was all a blur, but I’ll never forget her chestnut-colored hair in a knot at the nape of her neck. The way her glasses slipped down her nose to reveal big, round, chocolate eyes looking at me expectantly. The way her top lip was fuller than the bottom, and how her fingers held her pen. All of that is burned into my brain, yet it feels like a dream.

Without realizing it, one second I was dropping off papers, and the next she was asking me if I wanted to eat in the cafeteria with her. I don’t even think I answered her, I just followed along and got a tray of food. She was friendly and talked nonstop, but nothing beyond that. She kept her distance, and I’m pretty sure I only said about three words the whole time, but it was nice. The nicest meal I’d ever had.

“You’re overthinking,” my pop tuts, and I ignore him.

He’s right, but it’s complicated. Isn’t it? I don’t want to mess things up. I’d rather be in the friend zone with her than be nothing at all.

“I’m going to take a look at your computer and make sure you haven’t turned that virus software off yet,” I say, pushing away from the patio table and going in the house.

“The damn thing slows down my solitaire game,” Pop yells from the porch, and I shake my head. That’s all he thinks a computer is good for.

I spend the afternoon cleaning up his software and then walking with him to the market and helping him bring groceries back home. We cook Sunday dinner, and some of his friends come over to eat and give me a hard time about not being married or having any kids yet.

Old men are almost as bad as the ladies. But these widowers are old softies to the core, and they all want grandkids. Some of them have their own, but apparently a lot is never enough.

When they break out the cards, I call it a night and head back into the city. I’ve got a place on the Upper East Side that I got for a deal when I was twenty-five. I’ve fixed it up, and though it’s simple, it’s palatial by New York standards, and it’s all mine.

I take the subway back home and think about Jay the entire ride back. I always think about her this time of night. I wonder what she’s doing, who she’s with, and if she’s thinking of me.<p>

It’s the worst part of the weekend, being away from her. And the reason why I love Mondays so much. Another chance to see her, another chance to be near her. It’s the day I look forward to the most.

The For Her Series:

Alexa Riley is two sassy friends who got together and wrote some dirty books. They are both married moms of two who love football, doughnuts, and obsessed book heroes. They specialize in insta-love, over-the-top, sweet, and cheesy love stories that don’t take all year to read. If you want something safe, short, and always with a happily-ever-after, then Alexa Riley is for you.

To celebrate the release of CLAIMED by Alexa Riley, we’re giving away a $25 Amazon gift card!