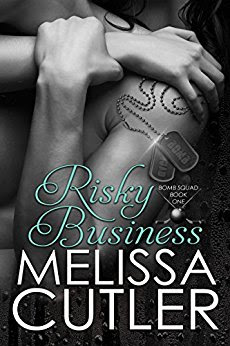 Make Your Move, Soldier…
Finally, soldier Theo Lacroix’s life is right where he wants it. He’s on the cusp of buying the houseboat business he’s run for a decade and he’s the star player on Bomb Squad, an ice hockey team for combat-wounded veterans like him. He wants for nothing…right up until a sexy tornado of a woman crashes into his life and claims the business for herself. Theo knows he should quit and move on, if only he could ignore the chemistry sizzling between them or the urge to sweep her up in his arms and do some claiming of his own…

Allison Whitely lived a Cinderella dream—until her ex left her with a baby, a pile of debt, and a business she knows nothing about. And her would-be knight in shining armor? He’s a hard-bodied ex-soldier with an even harder heart. Never mind that she can’t stop fantasizing about kissing him. Allison’s never needed to be scrappy before, but to survive in her new life, she’ll have to go head-to-head, and heart-to-heart, with the man who just might prove to be her hero after all.


With the re-release of Melissa Cutler’s Bomb Squad series I thought I would re-post Melissa’s interview with herself. Enjoy.

The rule of thumb that I’ve discovered is that the best interviews are given by interviewers who really know their interview subject. So, as a special treat for Read Your Writes readers, I thought I’d interview myself, because who better to ask the hard, probing questions than the person who knows me best???

Do you actually type “The End”?
I don’t. I think it’s a rather silly idea that takes away impact from the last sentence, which I like to imagine hovering in the air all around my laptop, a tangible force humming with energy. Also, I rarely ever write the ending last. I usually write the end of the book somewhere near the beginning of the writing process. The one exception to this was HOT ON THE HUNT, which I actually did write the final scene last. Usually, the final scene I must write in order to finish the book is located somewhere around the 75% point in the manuscript.

With Risky Business, I had the ending written really early on in the writing process. If memory serves, I wrote the first, second, and third chapters, and then I wrote the ending. You might find it interesting to know that when I finish writing a book, I usually cry like a baby for a while as part of my adrenaline crash.

But that’s not the only time you cry while writing…
Good point, Interviewer Melissa. I weep a lot while writing. I’ve got what I like to call “easy tears”. I cry at commercials, cry when other people are super happy, cry at funerals for people I’ve never met, so I figure, if a scene that’s supposed to be emotionally powerful DOESN’T make me cry, then I need to go back to the drawing board. I think having “easy tears”, having my emotions close to the surface, is a real asset as a writer. I embrace that quality in myself.

How did you pitch the Bomb Squad hockey series to your agent?
Excellent question! We were out at lunch and I looked her square in the face and said, “Picture this: the Erie Canal”. And she looked at me like I was nuts because nobody wants to read a romance about the Erie Canal, lol! The hard truth is that I’m terrible at verbal pitches, but I’m a dynamo with the written word and so I assured my agent that I’d stop speaking of it immediately and email her the first chapter. Although the small town along the Erie Canal that RISKY BUSINESS is set it is the perfect setting for my story, the real pitch is that the books are about the players on a men’s league ice hockey team for wounded veterans finding love after they’ve been granted a second chance at life.

What kind of research did you do?
I really hate that question. Next.

Cocoa Pebbles or Lucky Charms?
Cocoa Pebbles. Duh. What the hell kind of rookie interviewer are you? (ahem)

How did you come up with Allison and Theo’s names?
Funny you should ask that, Interviewer Melissa. I named Theo after an actual NHL hockey player named Theoren Fleury. Not that Mr. Fleury and my character have anything in common, but I always loved that name, Theoren, long before I knew I was going to be a writer someday.

Allison is named after one of my favorite all-time contestants on the TV show So You Think You Can Dance. Love that name because it’s not cutesy and not overly serious, and I have a weird preoccupation with naming characters “A” names (Allison, Avery, Alicia, Amy, Aaron…) I’ve now vowed to myself not to name any more characters “A” names for a while.

What’s one aspect of writing that you don’t like?
I don’t like to write about people’s clothes or hair. At all. Usually, my editors have to instruct me to go back through my manuscripts and add details about the way people look, and I try to get away with not writing those elements whenever possible. That’s the cool thing about writing blue collar heroes and heroines: they wear a lot of T-shirts and jeans. Or, in the case of my black ops agents, cargo pants. (Smile) Honestly, I really like readers to be able to draw their own conclusions about what characters look like. I think most readers paint a picture in their minds about characters’ appearances based on dialogue, which is a purer way to tap reader imagination, in my not-so-humble opinion.

What’s your favorite scene in Risky Business?
The whole sequence of Theo driving Allison to the store in the middle of the night to buy children’s fever medicine is my very favorite. It makes me cry every time. Also, I have a weakness for Chelsea, Allison’s irresponsible gypsy of a sister. I love her. No, I ADORE her. I know that all readers won’t feel that way about her because she’s a really polarizing character, but I loved writing her scenes.

And, to whet your appetite for RISKY BUSINESS, here’s a scene from the book for you to enjoy…


As of a few hours ago, Allison had a new mantra. Don’t think about it.

She could live with the aggravation and desperation that Theoren evoked in her, as long as it kept her from the other thought threatening to take precedence in her mind—that thought being about how he’d looked wearing nothing but a pair of sopping wet boxer shorts, as he had been a few short hours earlier on the deck of his houseboat.

Nope. Because she was his boss and that would be totally inappropriate.

He paced to the sink and paused to stare out the window. Allison’s eyes settled on his backside, now clad in worn jeans.

Don’t think about it.

She wrenched her gaze to the table and the cup of chamomile tea she’d poured an hour earlier. It was cold now, but she couldn’t bring herself to bully past him to the microwave to warm it up.

“Theoren... will you just sit down so we can talked about this civilly?”

“It’s Theo. And what was it that you wanted to civilly talk about?”

For the moment, annoyance won the battle over her desperation—and lust. “Don’t play stupid. You know we have a lot to talk about or else you wouldn’t still be here throwing a tantrum like a…like a…hungry bear.”

He prowled to the table, narrow eyed, and braced his hands on it, leaning toward her. “Have you ever seen a hungry bear? Because they don’t throw tantrums. They devour.”

She mimicked his pose, leaning in, getting in his face. “Are you going to devour me?” The second the words crossed her lips, her cheeks heated.

Stop thinking about that, Allison. For real, this time.


(I love that scene so much! That Theo is such a grouch sometimes… *swoon*)

Melissa Cutler knows she has the best job in the world, dividing her time between her dual passions for writing sexy contemporary romances and edge-of-your-seat romantic suspense for Harlequin, Penguin, St. Martin’s Press, and Kensington Books. She was struck at an early age by an unrelenting travel bug and is probably planning her next vacation as you read this. When she’s not globetrotting, she’s enjoying Southern California’s flip-flop wearing weather and wrangling two rambunctious kids.