Review ~ THE MAN I WANT TO BE by Christina Elle 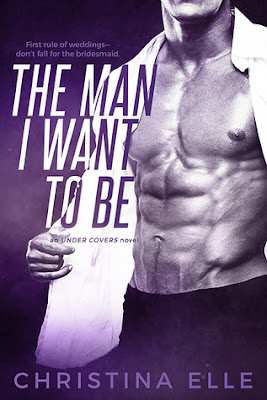 First rule of weddings--don’t fall for the bridesmaid.

DEA agent Bryan Tyke hates weddings. He hates them even more when he's forced to travel to a hot as hell beach resort to watch his best friends say I do, while acting happy about it. He isn't happy. If those two want to buy into happily ever after, good for them. That isn't in the cards for Tyke. It hasn't been since he joined the army years ago and lost everything. That is, until the woman he’s never forgotten shows up as a bridesmaid and puts herself into immediate danger.

Kenna McCord has bigger issues than running into the gruff, sexy guy who broke her heart. Someone is stealing from wedding guests, including her late mother's sapphire ring, and Kenna needs to find the thief ASAP. Reluctantly, she agrees to let Bryan use his skills and resources to help with the investigation, knowing full well it will lead to nothing but frustration and more broken promises. Unfortunately, there’s still something between them and it can’t be denied… 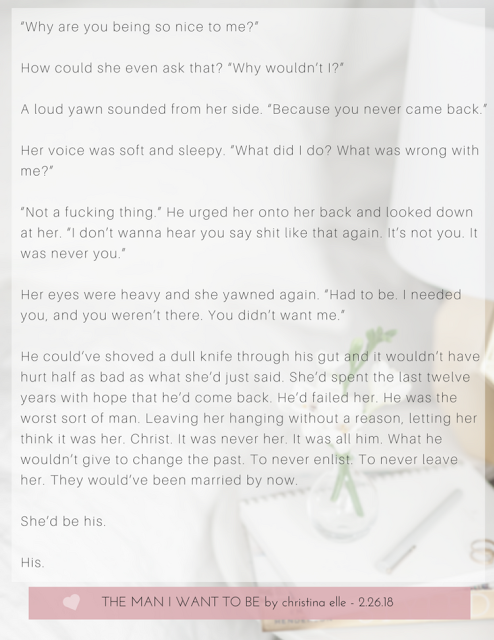 The Man I Want to Be was not the book I wanted from Christina Elle. Christina writes these amazing visual and authentic action scenes that really put you into the middle of everything. I wanted that! What I got was a second chance romance with a little sleuthing on the side. And a hero whose story broke my heart.

The night before Bryan Tyke deployed overseas, he proposed to his high school sweetheart and longtime love Kenna McCord. Months later, he emails her a Dear Jane letter and doesn’t see or speak to her for twelve years. All that changes with the destination wedding of his bestfriends Ash and Luke. Unbeknownst to Bryan, Kenna is a bridesmaid and childhood friend of Sam, who’s set to marry Ash. While there is still unresolved feelings between the two, they agree to spend the week being civil and staying away from each other. Too bad Sam realizes that Bryan is “Bear”, the man who broke Kenna’s heart. She makes it a point to have them be paired off everytime there is a couple related event. Bryan and Kenna are further drawn together when Kenna realizes her mother’s sapphire ring has been stolen from her room. Knowing how important the ring is to Kenna, he promises to get it back before the wedding.

Bryan had my heart from the beginning. From reading the previous books, I knew he was still hung up on someone. I just had no idea who or what happened with the relationship. As I mentioned, Christina Elle is extremely good at giving you very detailed visual scenes. Bryan’s flashback to his past and the secret he’s been carrying around broke my heart and had me reaching for tissues. Kenna was not one of my favorite people throughout this book. At times, my feelings for her ran hot and cold. I understand that she had every right to be mad and upset, but there was no reason for her to be mean and cruel. As far as being together, they really worked well as a couple. When they weren’t arguing. There’s a playfulness about them that’s fun to watch. In the bedroom, they are extremely compatible.

There’s one more member of Ash’s DEA team left, Jason Reese. I’m hoping Christina will decide to take his story back to the action and true suspense found in the first two previous books.


Purchase The Man I Want to Be from:
Amazon | Paperback | Barnes & Noble | iBooks | Kobo | Goodreads

On Her Six ~ Review
In Walked Trouble ~ Review