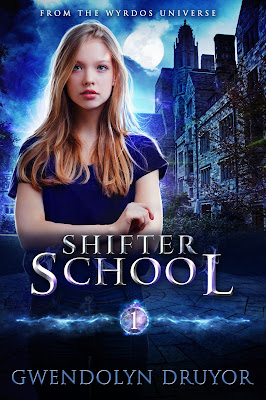 She’s gonna get them all killed.
So they locked her away.

All that is about to change.

In a world hidden from wyrdos and humans alike, shifters are still recovering from a vicious plot to destroy them all. They have two laws they live by now:

1) Hide
2) Protect the children at all costs.

Laylea has just broken rule number one. But she’s only fourteen. So they’re sending her to school. Where she’s going to learn . . .

Anyplace can be a prison.

The Lincoln Park Shifter School is not your grandma’s uber-secret, underground academy.

Hi Gwendolyn. Welcome to Read Your Writes Book Reviews. How are you?
Hi Kim and Gemini!

Thanks for hosting me. It’s a gorgeous day here in LA. [same old same old] but we had RAIN last night. I love weather. I’ve got ScotchIrish hair that dreams of high storms. I typically listen to Thunder Focus sounds on Brain.fm while I write so I couldn’t waste the real rain. I stayed up all night working on my new WereHuman novel and I’m a wee bit punchy this morning.

I’ve had those mornings. LA rain is really nice. It takes awhile for people (at least me) to realize that it’s rain falling from the sky. I like the sound of Shifter School and I’m trying to figure it out. So, please bear with me as I ask all of these questions.
I will be as patient as Toby, the bear in Shifter School. (He’s got BIG secrets in addition to his depression issues.)

Uhm is that a good thing? I’m going to go with that’s a good thing. So here goes...What are Wyrdos?

Wyrdo is the overarching term that refers to supernatural creatures. Demons, gods, brownies, banshees, shifters, the boogeyman; all are wyrdos.

Okay. How did you come up with the idea for this world?
The Wyrdos Universe started with Dee. A friend of mine needed a ten minute play for her theater’s Halloween celebration. I had been thinking about what role certain old folk creatures play in modern society and how they are able to blend in so well that we aren’t aware of them. I chose to focus on a banshee and just followed where she led. She led me to The Office, a bar where wyrdos can be themselves.

How does Shifter School fit into your Wyrdos world? Is this a new series? Do you have to read the Wyrdos Tale series first?

Yes, you can just jump straight into the Shifter School series. But the world is so intertwined, you can really start anywhere at the moment. I’m waiting for my Beta Readers to tell me which book they’d suggest reading first! I would totally recommend starting with Dee. It’s a short read and my personal favorite.

Shifter School is the first book of a new series in the wyrdos universe. It focuses on Laylea and her introduction to the full-on, hidden shifter world that she never knew existed. The story starts about a year after the events in The Wyrdos Tales, about four years after WereHuman: The Witch’s Daughter (Laylea’s origin story, in a way).

I read an excerpt of Shifter School and I have to say it was not what I expected at all. Laylea was quite surprising. There was mention of a tail and paws... What can you tell us about her? Who is she? What makes her tick?

Laylea (in hiding from an evil scientist who also wants to know what makes her tick) considers herself to be a werehuman. She is a dog who sometimes shifts into the form of a girl. She was abandoned by her biological mother for her safety and ended up being raised by a witch and a genetically-altered super soldier. Now she takes on paranormal private investigator jobs to survive.

Love is very important to her. She believes passionately in unconditional love because it’s all she experienced growing up as a puppy. Humans don’t greet each other the way they greet dogs. You’re allowed to adore a dog on sight AND let them know that they are the cutest thing ever. That’s how Laylea treats everyone she meets.

But the world doesn’t encourage trust and Laylea’s eternal optimism is being tested. She’s fourteen. That’s geriatric for a small terrier. She’s helping her friends on Team Wyrdos hunt down guys who are making and selling a drug that gives powers to thumpers (non-supernatural humans) and numbs the powers of wyrdos. She nearly gets a friend killed because she can’t stop herself from shifting in front of thumpers and that gets her condemned to an underground academy filled with three hundred pubescent shifters. We all know kids aren’t always kind.

Laylea Hillen aka Woodford is the protagonist of Shifter School. Who are some of the other characters and what can you tell us about them?
Laylea’s friend Kyle has turned out to be a lot more important to the story than I expected. He was the banshee Dee’s partner in Homicide. Then he went through a change. Laylea helped him and is the only one in their circle who knows he isn’t entirely dead. She thinks he’s too good a guy to go evil but do you ever really know?

At LPSS, Laylea meets Oscar, a werepanther, and KC, a werewolf masquerading as a werecoyote. Oscar is a rich kid who claims he’s a paid student, but Laylea meets him in the back of a police car smelling like cheap liquor and drugs, so there is clearly more to his story. He also keeps talking like a jerk and behaving like a gentleman. She’s intrigued. Laylea KNOWS that KC was supposed to be a paying student. She knows she’s really a werewolf. And she knows KC has given the school a fake name. She just doesn’t know why. Gemini, KC is your girl. Her parents own an electronics store in this near future Chicago. So, KC knows how to hack anything. She’s got all the cool tech.

Can you expand on the book blurb and tell me what readers can expect from the book?
Expect an adventure! Laylea lives a complicated life and you’d think it would simplify once she’s dragged out of the city and down into a school she cannot escape from. [never end a sentence with a preposition.] But this is Laylea, we’re talking about. If there’s a secret around, she’s going to sniff it out. LPSS is FILLED with secrets; some more obviously dangerous than others. She’s going to make some good friends. She’s going to play Capture the Flag in an underground jungle. She’s going to read every book in the library (maybe not all in this novel). She’s going to piss off the werewolf pack. She’s going to be trapped in human form. And Laylea is going to have to take on the head of the school to protect the entire student body.

Good Lord! That’s a lot for a fourteen year to deal with. Gwendolyn, thank you so much for answering some of my burning questions. Congratulations on the release of Shifter School. I love the cover by the way.
Thank you! I’ve had a lot of fun! I hope you’ll have me back sometime.

Definitely. You know where to find me.

A long, shrill scream drew Laylea back into the zoo. The guard who didn’t want to be called Beta was backing away from a tall black man in jeans, a button-down, and Fox sandals.

“Kyle!” Laylea screamed his name even as she heard KC screaming hers. “Kyle! You’re a good man! Think of Jeannie and KJ!”

The vampire looked her way. His familiar, affable smile appeared and he waved at her. “We’re just gonna have a talk. Get back to school, you reprobate.”

Then the smile melted away as though it had never been and Kyle stalked out of sight.

“Lee, come on.” KC yanked her out the entrance.

“No one can help that guy now.”

Tears poured down Laylea’s face. KC was right. If Kyle had already killed a pack of werewolves, Laylea wasn’t going to be able to stop him from killing one guard. But she had to try. She hadn’t spent the last seven months hiding him from Dee and Morioka and everyone else just to give up on Kyle now. “I can.”

She yanked her arm out of KC’s grip and they both fell on the uneven steps of the plinth.

Gwendolyn Druyor was born at the Quonset Point Naval Air Station Hospital, North Kingston, RI. The ID bracelet wrapped three times around her little wrist. She could swim before she could walk and read before she started school.

She has traveled the world telling stories. After a year in Amsterdam writing and performing sketch comedy at Boom Chicago, she toured North America with Shenandoah Shakespeare and with the incredible educational show Sex Signals. From Paris, FR to William’s Bay, WI, you’ll find her gypsy life reflected in her books. If you met her on the road, read her closely, you may find yourself in there.

For now, Gwendolyn lives in Hollywood with her Irish Jack Russell, Josh Lyman Zyrga, who is still pouting over the fact that she didn’t put him on the cover of WereHuman.

For more information on Gwendolyn and her projects sign up for her newsletter.

You can follow the Shifter School Blog Tour here.