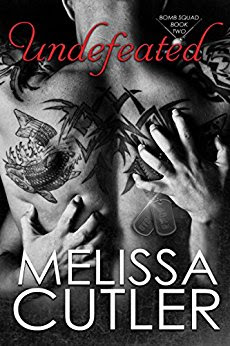 This soldier can’t be tamed…

Yoga instructor Marlena Brodie is always up for a challenge, and convincing a hockey team full of rugged combat veterans that yoga will help them snap their losing streak is just that—even though it means being in close contact with Liam McAllister, her high school crush gone bad. She can feel the damage pouring off of him, but also a wild, sexy connection she can’t resist.

As a combat medic, Liam McAllister saved countless souls, but long after his discharge from the army, the wounds to his own soul just won’t heal. He’s given up on ever being whole or happy again, but Marlena’s fearless heart and healing touch stir his soul and body to life again. The raw heat they create together threatens to burn both their lives down, but Liam needs Marlena like he needs his next breath, so to be the man she deserves, this war hero will have to conquer his demons and take the greatest risk of all…falling in love.

After high school, Liam McAllister joined the Army. While serving time in Afghanistan, he was exposed to the harsh reality of war and realized just how violent and uncaring men were. His time in the Army changed him. He has returned to Destiny Falls, New York, suffering from PTSD. Liam is a carpenter and is also a member of the Bomb Squad which is a group of amature hockey players made up of wounded veterans with various disabilities.

Marlena Brodie has lived in Destiny Falls her whole life. She’s a yoga instructor who tries her best to stay attuned with the universe and seek peace. Unbeknownst to Marlena, she’s also suffering from PTSD. Marlena has had a thing for Liam, her best friend’s twin brother since they were kids. The two never really clicked but there was always some sort of pull between them. Now, a massage is about to change both of their lives.

Undefeated is the perfect title for this book, as it fits Liam and Marlena perfectly. While they each have struggled with their lives, they haven't given up although many would have. They simply have chosen to fight for themselves and each other. Undefeated is truly a gripping story that will have you screaming and weeping for the characters.

“It’s you and me, and all you have to do is breathe. I’m going to take care of everything else.”

Melissa Cutler has managed to pack a lot into this book. Undefeated goes beyond what I initially thought it was going to be about. Marlena and Liam have endured so much. Melissa truly captures the struggles of war veterans returning home and attempting to re-immerse themselves into the civilian population. She adequately captures the lives of family and friends trying to adjust as well. Prepare yourself for an emotional ride from start to finish.