A RECIPE FOR DISASTER Interview with author Tracy Solheim 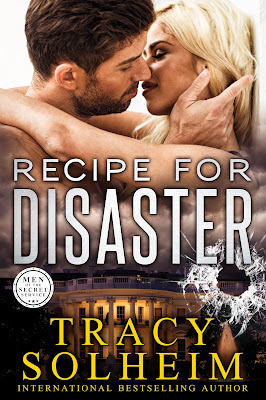 Secret Service Agent Griffin Keller always gets his man. And, his woman. In pursuit of an international counterfeiter known only as "The Artist", Griffin stumbles across paintings that have been unknowingly stolen from the White House and swapped with forgeries. His only clue to the thief's identity, a dish towel from the White House kitchen.

White House pastry chef Marin Chevalier desperately needs a date to her cousin's society wedding. Unfortunately, her busy schedule and lackluster social life leave her little opportunity to meet eligible men. When a sexy Secret Service agent shows up in her kitchen—and just about everywhere else she goes—Marin believes she's finally met the perfect date. But as a series of frightening accidents and near misses begin to occur around her, Marin finds herself relying on Griffin as more than just her "plus-one".

The more dead bodies that pile up around Marin, the more Griffin is convinced she is the link to The Artist. Too bad he can't convince his libido. The curvy chef has gotten under his skin like no other woman. When the clues finally fall into place and Griffin realizes Marin is not the suspect, but instead the target, he'll risk everything in his arsenal to keep her safe. Even his heart.

Hi Tracy. Welcome to Read Your Writes Book Reviews. How are you?
I’m excited to be on the blog today! I love getting an opportunity to chat with readers and to give them a behind the scenes glimpse of my books.

Awesome. Congratulations on your new release, Recipe for Disaster.
Thank you. It was a fun book to write. I enjoy getting my hands dirty with research and there are a lot of interesting topics in this book from food to history.

That’s good. What can you tell me about Recipe for Disaster and the Men of the Secret Service series?
This is book one in a proposed trilogy featuring three men who became friends at West Point, served in the Army’s Special Forces together and now work for the Secret Service. Recipe for Disaster is the story of Griffin Keller the so called ‘beauty’ of the trio. Griffin works for the agency’s counterfeit division. In his quest to bring down an international ring of counterfeiters, he discovers several paintings stolen from the White House. His only clue leads him to the White House pastry kitchen and chef Marin Chevalier, who unbeknownst to her, becomes his chief suspect.

Griffin Keller sounds like a man of honor. Tell me about him and what you love about him?
Griffin is a man of honor, for sure. He’s married to his job and he’s seen firsthand how a career in the Secret Service isn’t always conducive to permanent relationships. I love that he seems oblivious to his physical charm, even when his dimples have some dire consequences on his career. I also loved how he tried to compartmentalize his feelings for Marin into simply doing his job and needing to protect her.

The idea of being a pastry chef for the White House sounds amazing. Tell me about Marin Chevalier.
This was my favorite topic to research for the book—the food! And the history of the White House. I loved being able to include the details about the White House Easter Egg Roll and all the behind the scenes preparations that go into it.

Marin is the granddaughter of a wealthy hotelier. Unlike the rest of her family, she wants nothing to do with running the business. Her great loves are art and the art of cooking. She’s so involved with her work however her social life is lacking. When her cousin demands Marin bring a date to her society wedding Marin can’t believe her luck that a sexy Secret Service agent is suddenly paying attention to her. Being tall and curvy, Marin doesn’t consider herself much of a catch, so Griffin’s interest is even more thrilling. And there is definitely some chemistry going on. But when she finds out Griffin is only paying attention to her because he thinks she is an art thief, that’s when things really get interesting. Marin is no shrinking violet and she proves that and more when the real art thief tries to take her down.

When you’re writing a series, how do you determine who to pair together?
Good question. The idea for the characters always comes to me first. In the case of Recipe for Disaster I got the ideas for the characters by watching the nightly news. There was a story about a DEA agent in Afghanistan who was so unbelievably sexy that I couldn’t get his image out of my mind. A little while later, I was watching Pardon the Interruption on ESPN and Tony Kornheiser, one of the hosts, mentioned his daughter had gotten a job as a pastry chef in an elite Washington restaurant. I loved the idea of a federal agent and a pastry chef on the run. After a few tweaks, Griffin and Marin were born.

I love the way you came up with them. What about Griffin and Marin told you that they belonged together?
Marin is confident in her capabilities in the kitchen and the art world, but, like most women, she’s not as confident about her appearance. Griffin sees his drool-worthy good looks as a detriment so right from the start they have opposing experiences. Griffin is always trying to prove he is more than his dimples and then he gets to show Marin she is more than her “child-bearing hips”.

Can you tell me about your favorite scene from the book and why it’s a favorite?
There’s a scene that takes place in a Metro station where Griffin is trying to win Marin over. He’s struggling to fight his attraction to her while trying to do his job. She’s convinced a guy as good-looking as Griffin couldn’t possibly be interested in her. Her head is telling her to ignore him, but her body isn’t listening. The exchange has some really cute banter between the two, some of it more tender than other parts. Griffin has never had to struggle to get a woman to fall at his feet and it’s very humbling. On the flip side, Marin is cautiously trying to protect her heart at all costs. Neither one of them is aware of the immediate danger they are in.

Recipe for Disaster marks your first time writing a romantic suspense. What was that experience like?
I really enjoyed writing suspense. Whenever I got bogged down in the plot, I could just blow something up or stab someone. It is very cathartic! On the flip side, as I found out with the second book in the series, I need to do a lot more advanced plotting than I normally do. More of the details and plot threads need to be worked out up front. Still, nothing about writing it was ever boring. I hope readers aren’t bored reading it!

Tracy, thank you so much for answering some questions for me.

Excerpt Setup ~ After Marin learns Griffin has only been paying attention to her because he thought she was a suspect in the art thefts, she is taken to a safe house for her protection from the real thief. While she’s there, she keeps busy by cooking for the agents on her detail. Things are going fine until Griffin arrives and the two of them are forced to address the elephant in the room:


“Damn it, Marin, I was doing my job!” Griffin was suddenly beside her.

The knife stilled in Marin’s hand. “Your ‘job’? Your job.” She slowly turned and pointed the tip of the blade at Griffin’s chest. “Was it your ‘job’ to kiss me senseless? Or how about when you had your hands and mouth all over my body, was that your ‘job,’ too, huh?” She jabbed the knife at him. “Or what about when you were making me—”

“For crying out loud, Ben can you give us some privacy!” Griffin yelled, his eyes never leaving Marin’s face.

“Just when it was getting good,” Ben mumbled. “Come on, Otto, let’s go check your pee mail. Maybe we’ll catch up with Adam on his run while we’re out.”

“Put the knife down, Marin,” Griffin commanded once Ben and the dog had left the kitchen.

Marin’s hand holding the knife shook, but she couldn’t seem to get the rest of her body to move.

The knife landed on the counter with clank. Her eyes stung and her face burned with humiliation. This man had too much power over her. And stupid woman that she was, Marin was about to give him more.

He stepped in closer so that their bodies were only separated by a distance the same width as the blade of the knife she’d just tossed on the counter. Marin breathed him in. Despite being exhausted and bedraggled, Griffin still smelled crisp and clean, like a freshly showered man. The guy was a menace to women everywhere.

“I kissed you, Marin, because I couldn’t not kiss you.” His soft voice was like a caress to her skin. “I’d be lying if I said I tried to avoid kissing you. Because I really didn’t. Yeah, it was wrong, but I’m not going to apologize. From the moment I saw you standing in the pastry kitchen looking like an Amazon goddess, I knew I had to touch you. To kiss you. And when I finally did, it felt anything but wrong.”

After years of writing reports and testimony for Congress, Tracy Solheim decided to put her creative talents to better use. A two-time finalist for the Maggie Award for Excellence, she’s the international best-selling author of contemporary sports romance, romantic suspense, and small-town second chance stories. Tracy lives in the heart of SEC country, also known as the suburbs of Atlanta, with her husband, two adult children who frequently show up at dinner time, and a Labrador retriever who thinks she’s a cat. She currently serves as the vice president of programing for the Georgia Romance Writers. When she’s not working out with friends (i.e. lifting heavy bottles of wine), she’s writing. Except for when she’s reading, but according to her, that’s just necessary research.