🏒 Review ~ HOOKED ON YOU by Kate Meader 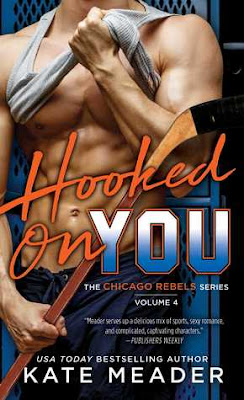 The steamy Chicago Rebels series returns with this racy and sassy tale of embittered hearts, second chances, and going for the goal—on and off the ice.

Violet Vasquez never met her biological father, so learning he left his beloved hockey franchise—the Chicago Rebels—to her is, well, unexpected. Flat broke and close to homeless, Violet is determined to make the most of this sudden opportunity. Except dear old dad set conditions that require she takes part in actually running the team with the half-sisters she barely knows. Working with these two strangers and overseeing a band of hockey-playing lugs is not on her agenda…until she lays eyes on the Rebels captain and knows she has to have him.

Bren St. James has been labeled a lot of things: the Puck Prince, Lord of the Ice, Hell’s Highlander...but it’s the latest tag that’s making headlines: washed-up alcoholic has-been. This season, getting his life back on track and winning the Cup are his only goals. With no time for relationships—except the fractured ones he needs to rebuild with his beautiful daughters—he’s finding it increasingly hard to ignore sexy, all-up-in-his-beard Violet Vasquez. And when he finds himself in need of a nanny just as the playoffs are starting, he’s faced with a temptation he could so easily get hooked on.

For two lost souls, there’s more on the line than just making the best of a bad situation… there might also be a shot at the biggest prize of all: love.

Well dang. The blurb Kate Meader has written for Hooked on You is actually an accurate and good review for the book. Hooked on You is the standalone third and final book in the Chicago Rebel’s series. The series centers around three half-sisters who either didn’t get along or didn't know the other existed until their father’s death. Then they are tasked with running the Chicago Rebels pro-hockey team. Clifford Chase’s will stipulated that the sisters had to work together in running the team and that the second to last place team had to make it to the playoffs this season, otherwise it would be sold.

Hooked on You has been the book I’ve been waiting on since the series debuted in 2017. It features Bren St. James and Violet Vasquez. These two seem to be total opposites, but opposites attract. And these two really complement each other.

Bren is the Captain of the Chicago Rebels. He’s a recovering alcoholic, who loves his kids, and has never felt worthy of the life he has. Bren is grunchy and prefers to keep to himself. But honestly it’s all a cover. He fights everyday to be a better person and make amends for the mistakes of his past. He’s truly a good man with a heart of gold.

Violet is the youngest daughter and dirty little secret of Clifford. She never met her father and only met her sisters after his death. She is an outspoken ray of light who loves getting attention. She’s also a breast cancer survivor and isn’t accustomed to depending on anyone else. After being diagnosed with breast cancer and surviving, Violet has chosen to embrace life. She has purple highlights and uses her body as a tattoo canvas. But despite what she shows the world, she’s vulnerable.

When Bren unexpectedly gets custody of his kids during the middle of the hockey playoffs, Violet steps in to help. The two end up being forced to work together for the benefit of his kids. These two have had a push/pull relationship for months. Now with them both living under the same roof their feelings ignite.

Hooked on You is a must read!!!! All the characters from the previous books make appearances. I have to admit that it was really nice to revisit everyone and see how their lives have progressed. One of my favorite things about this series is the bromance between the guys. It is alive and front and center in this story. To say I’m disappointed that this is the end is an understatement. I am! I also wish that the Swedish goalie Erik Jorgenson would have gotten a story.

You can read an excerpt of Hooked on You here.