Review ~ BETWEEN MARRIAGE AND MERGER by Karen Booth 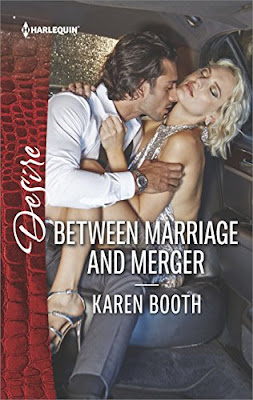 From boardroom to bedroom...and back?

Hotel magnate Noah Locke has worked too hard to let a PR scandal ruin the biggest deal of his career. If a fake engagement will fix his image, he's in. So is Lily Foster, his assistant--and the one woman he's wanted for years. Soon there's nothing fake about their heated kisses and steamy nights together. Can this arrangement turn real...or is Lily playing for a different prize?

Between Marriage and Merger is a fake engagement/office romance which is part of Karen Booth’s Locke Legacy series. The series focuses on three siblings who are involved in the real estate business and own a hotel.

Over the last year or so, Noah Locke (the middle child) has watched his older brother Sawyer and younger sister Charlotte meet, fall in love, marry, and start families with the love of their lives. While it’s something he wants to have, a part of of him doesn’t think he is capable of or deserving of love. While he isn’t overly crazy about it, he’s okay with being the playboy of the Locke family. That is, until some unwanted media attention jeopardizes a multi-million dollar deal for Locke and Locke.

In a PR move to appease a potential business partner and put Noah in a more favorable light, Charlotte suggests that Noah and the company’s executive assistant, Lily Foster, pose as an engaged couple for a weekend wedding. The thought is that if Lyle Hannafort and his wife Marcy see that Noah is engaged and on his way to being a family man, it won’t make Hannafort Hotels look bad and the deal will be back on. However, no one expects a simple fake engagement to get out of hand.

After being left at the altar, Lily isn’t a big fan of weddings. But posing as Noah’s fiancée allows her to set up a nice nest egg for herself and spend quality time with Noah, who she’s been attracted to since she started working for the company. To both of their surprise, Noah and Lily each have feelings for one another. But making sure their hearts don’t get involved is going to be even trickier then either expected.

My heart ached for Noah who at times, seemed to be lost in the family dynamic. While his feelings for Lily were very real, Sawyer consistently insisted that he stay away from her. I will admit that my dislike for Sawyer was at an all-time high with this book. When faced with the question of Lily’s loyalty to Locke and Locke I loved that Noah never wavered in his belief of her.

Between Marriage and Merger is a standalone read, but I found it was a good ending to The Locke Legacy series.