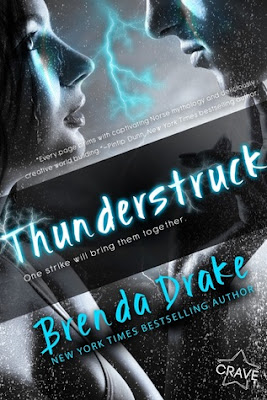 One strike will bring them together.

Stevie Moon is famous...at least to the subscribers on her comic review vlog. At school, she’s as plain as the gray painted walls in the cafeteria. So when Blake, the hot new guy at school, shows an interest in her, she knows trouble when she sees it. Been there. And never doing it again.

As the son of the god Thor, Blake Foster's been given an important mission—to recover the Norse god Heimdall’s sacred and powerful horn before someone uses it to herald in the destruction of the entire universe. But while Blake is great in a fight, the battlefield that is a high school’s social scene is another matter.

Blake knows his only choice is to team up with the adorable Stevie, but she's not willing to give him even the time of day. He'll need to woo the girl and find the horn if he hopes to win this war. Who better to tackle Stevie's defenses than the demi-god of thunder?

Thunderstruck is the most vibrant and intriguing book by Brenda Drake I have ever read. The plot, the storyline, the romance, everything is phenomenal. I love the world Brenda has created.

Blake Foster is Thor’s son and his mission is to go to Earth and find Heimdall’s horn before it gets into the wrong hands. Stevie Moon is a closet comic book geek. When they meet Blake gets this feeling that Stevie is the key to finding Heimdall’s horn and saving his world.

Stevie and Blake’s relationship is so cute. Stevie’s “I don’t like him to I like him” transformation is so funny. This is a good girl meets “bad” boy story.

Sadly, there is some violence to four legged creatures so be mindful but, other than that Thunderstruck is an amazing story.