Feature Spotlight & Giveaway ~ ONCE UPON A PLAYER by Christina Phillips 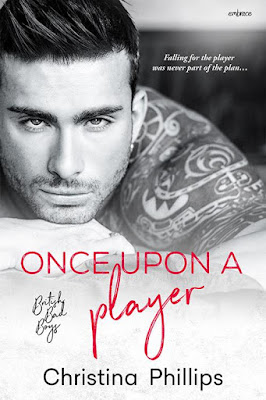 Falling for the player was never part of the plan…

Violet
When my mum gets sick, I volunteer to fill in for her and clean some hot jock’s penthouse. I’ve heard all the rumors about him, so the plan is get in, clean some toilet bowls, and get out. After my last experience with a “sports hero,” I’m done with that sort of guy.

But Lucas Carter is full of surprises. He wants to help me clean and is nothing like the toad the press has made him out to be. Resistance may be futile for some girls, but not me. Then he asks me to help him with the interior design of his new place. I can’t say, no. It’s going to look great on my resume.

Unfortunately, spending time with Lucas is dangerous. He’s so charming and sweet, but I can’t let myself forget––once a player, always a player.

“D’you have a business card?”

“What?” The word blurts out before I can stop it, and his grin doesn’t help, since it’s now obvious he knows I thought he wasn’t serious.

He wasn’t serious about wanting my help. Was he?

“Does that line ever work?”

Stop flirting, Vi. Except, even though it’s a bad idea on so many levels, I haven’t had so much fun in ages. Which says a lot about my self-imposed exile from the human race, but whatever. The truth is it’s a relief to discover I haven’t totally lost my touch when it comes to guys.

“I’ve never been accused of being dodgy before.”

“First time for everything.”

“I’m not asking for any special favors. I’ll pay the going rate.”

I’m smiling at him like a smitten groupie, but it’s impossible not to. “You’re funny. I’m not even qualified yet. If I do agree to help you out, all I’d ask in return is a release to use photos, and a testimonial.”

If you don’t ask, you don’t get…
“Deal.” He sticks out his hand, and after a second’s hesitation, when every warning bell clangs in my head that touching Lucas Carter is the worst idea ever, I cave, and his fingers wrap around mine. They’re warm, strong, and slightly callused, and I forget how to breathe.

Yep. Worst idea ever. I need to break contact, but it’s like I’m totally paralyzed, and Lucas doesn’t appear inclined to reclaim his hand any time soon, either.

I clear my throat, which shatters the spell and our connection. I resist the urge to flex my fingers since there’s no way I’m letting him know just how much his touch affected me.

“You’re going to make me ask again, aren’t you?”

Luckily my brain kicks back into gear before he jumps to the conclusion I’m completely flakey. “My number, right. Okay.”

Before I have the chance to rummage for pen and paper in my bag, he hands me his phone. “Here you go.”

It’s a surreal moment as I add my number to his contacts. And so he never looks at my name and thinks, Who the hell? I add “Interior Designer,” and pride surges through me. I might not be qualified yet, but I only have one more year until I am. Having a big name like Lucas in my portfolio sure won’t be a disadvantage.

And then reality hits me, and I can’t believe I’m so flipping gullible. “Are you serious about this? Or is it just some kind of ruse to get my number?”

That didn’t come out right. But I can’t explain what I mean without digging myself further into a hole, and as if I don’t feel bad enough, my face starts to burn.

“It’s totally a ruse to get your number.” He’s laughing, and I’m not sure whether it’s because he’s trying to take his phone and I have a death grip on the bloody thing, or because he finds the fact I needed to ask the question in the first place hilarious. Did I really think he was nice? “And I’m deadly serious about needing your help.”


Purchase Once Upon a Player from:
Amazon | Paperback | Barnes & Noble | iBooks | Kobo | Goodreads

Christina Phillips is an ex-pat Brit who now lives in sunny Western Australia with her high school sweetheart and their family. She enjoys writing contemporary, historical and paranormal romance where the stories sizzle and the heroine brings her hero to his knees.

Christina is addicted to good coffee, expensive chocolate and bad boy heroes. She is also owned by three gorgeous cats who are convinced the universe revolves around their needs. They are not wrong.

You can follow the Once Upon a Player Blog Tour here.