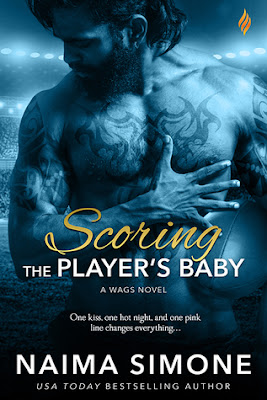 One kiss, one hot night, and one pink line changes everything...

After a divorce from her cheating football player ex, PR whiz Kim Matlock would rather drive a pine tree through her walled-off heart than work at the Seattle Wedding Expo. And the last thing she expects is to be grabbed and kissed breathless by a hot giant of a man looking to fend off a stalker. She doesn’t want emotional entanglements, but she can’t say no to one scorching night with the sexy stranger.

To her shock, she finds out afterward that a) he’s a pro football player, aka her kryptonite, and b) she’s pregnant.

But nothing could have prepared her for his response...

Kim Matlock finally has her own story!!! Happy dance. Wait...She divorces her cheating football player husband, she gets accosted by the most gorgeous man she’s ever seen, kissed within an inch of her life, has a one-night stand with said hottie, discovers he’s a freaking football player and oops, also discovers she’s pregnant with his child…..Not really what I pictured for her story. But man oh man...This. Is. The. Story. Kim. Needed.

Remind me to never doubt Naima Simone ever again! I love reading Naima because I know two things are going to happen; 1) I’m going to laugh and 2) I’m going to fall in love with the hero and heroine of the story. Honestly, before I picked up Scoring the Player’s Baby I was critical of it for surface reasons. The title screams gold-digger to me. Excuse me, but Kim isn’t one. She has a job she loves, makes her own money, and doesn’t need a man. Thank you very much. The hero has a beard. Not just a sexy five o’clock shadow, but a full mountain man beard. Eww. No thank you. By the end of the first chapter, I could care less about those issues.

Ronin Palamo is a man who seems to not have a care in the world. As star wide receiver for the Washington Warriors, he has money, adoring fans, NFL records, and his choice of any woman he wants. But behind his smiling face and electric personality is a man who carries the weight of the world on his shoulders. Since his father abandoned the family when he was ten, Ronin has felt as if he had to be the “man of the house”, a protector and caregiver to his mother and four sisters. He also feels like a failure for not saving and protecting the love of his life two years ago.

Kim first made an appearance as the half sister of Alex Bishop, the hero of A Millionaire at Midnight. She was funny, gracious, and seemed to love life. As VP of Public Relations for Bishop Enterprises, Kim was at the top of her game. That is until her life came crashing down around her with the realization that her husband of three years had been cheating on her. Now, a year and a half later, Kim finds herself in Seattle being less than half the woman she use to be.

I haven’t read all of Naima’s books and I don’t profess to be an expert on her writings, but Scoring the Player’s Baby seems different from her other books. Ronin and Kim really had to fight the demons of their past to be together. Ronin had to prove to Kim, a woman who no one ever put first, that she was worth loving, fighting for, and worthy of being number one. I loved Ronin’s reaction to discovering he was going to be a father. He has such a tenderness about him that my heart sighs and leaps with joy. I loved that he isn’t a typical guy. He and Kim prove that opposites really do attract. For me, the best part of this story was the declaration of love moment.

The WAGS series features three football players who happen to be best friends. The books are all standalones, however Scoring the Player’s Baby has a big moment for Sophia and Zeph from Scoring with the Wrong Twin. There are two friends who have been around the whole series, neither are players, but Jason and Renee have been dancing around each other. I really really hope they get their own friends to enemies to lovers story.

Scoring with the Wrong Twin ~ Review
Scoring off the Field ~ Review