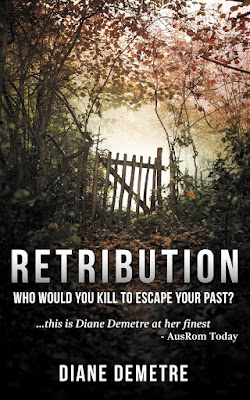 A gripping romantic suspense of betrayal, hope and love.

Jessie Hilton is tough. Since the age of fifteen, she has dreamed of being a principal dancer with the Australia Ballet Company. Now at twenty-four, she stands on the brink of fulfilling her dream unaware of a secret buried deep within her.

Ex-military officer, Brad Jordan is rebuilding his life with the help of his boisterous Border collie, Whiskey. After helping Jessie out of a tight spot, he discovers a kindred spirit in the ambitious ballerina.

But with the sudden attention of an unwanted admirer, Jessie’s life begins to spin out of control. Called back to her family home in country New South Wales due to her father’s unforeseen illness, she is torn between career and family. As her dream of being principal dancer fades, her stalker edges ever closer. But there is more to overcome than a lurking psychopath. Can Jessie and Brad confront their own past demons and finally be free?

Award winning author, Diane Demetre writes genre-busting stories which delve deep into the human psyche, and Retribution is no exception. Winner of Romance Writers of Australia Emerald Pro Award for Best Unpublished Manuscript, Retribution is her first romantic suspense. If you love a cast of complex characters, a slow simmering romance and an intriguing plot, don’t miss this page-turning romantic suspense with a twist.

Hi Diane. Welcome to Read Your Writes Book Reviews.
Thank you for having me on your blog. It’s wonderful to be here.

Romantic Suspense is a departure from what you usually write. Did you embrace this new challenge or think you made a huge mistake?

Jessie Hilton is a soloist with the Australian Ballet Company. Brad Jordan is an ex-military officer. What else can you tell me about these two?
Both are gritty characters who have faced childhood challenges and trauma few of us have experienced. Jessie and BJ are tough, yet vulnerable, determined and kind. The story revolves around how they confront their personal demons and instead of crumbling under the misery from their pasts, they use it to empower their futures.

Can you tell me about Jessie and Brad’s first meeting?
Jessie finds herself in trouble with a street mugger who tries to steal her bag. Ever the hero, BJ steps in and saves the day. It is a meeting which develops into a fast friendship between them, which often happens in life when we meet like-minded people who have similar characters traits to our own.

A lot of authors say a part of them is in every one of their characters. What qualities of you are found in Jessie?
Having been a professional dancer for the first third of my life, there is a lot of me in Jessie…we’re both passionate, driven, determined, tough and will do whatever it takes to get to the top, without hurting others.

And what qualities does she have that you wished you had?
Jessie probably takes more risks than me.

You have described the antagonist in this story as a “violent malignant narcissist”. And your tagline is.. “Who would you kill to escape your past?” Are there any triggers readers should be aware of?
Not really. I handle the sensitive subjects delicately without graphic details. And although there is lots of tension, I would never break my promise to the reader…there is a beautiful, happy-ever-after ending.

You have a Behind the Scenes section in the book. Can you tell me a little about it? What does it involve?
It takes the reader Behind the Scenes and gives them an insight into the research I did for Retribution. I provide a glimpse into the real-place locations in the story which I visited to get the atmosphere and authenticity correct in the story. It’s also gives the reader an opportunity to see the people who inspired me as my characters, as well as a selection of my author research thoughts and notes on the story.

When all is said and done, and readers have read the last word of Retribution what do you hope they take away from the story?
That they loved reading the story and will recommend it to their friends. Most of all, I hope they will appreciate the overarching theme of the book… That no matter what happens in our lives, forgiveness is always better than retribution.

Diane, thank you so much for taking the time to answer some questions for me.
It’s been a pleasure. Thank you

“But I did find this.” He held up a sealed pink envelope that he’d skewered on the tip of one of Jessie’s kitchen forks. The wary expression on his face kindled a spark of fear in her.

She eyed it with suspicion. “What is it?”

“I’m not sure, but it was propped up on the pillows on your bed and it’s addressed to you. I haven’t touched it.” His flinty gaze riveted her to the spot. An icy shiver skidded down her spine, leaving a path of cold, clammy apprehension.

“You open it.” She rubbed her arms a little too fiercely.

“Do you have any gloves? If this has got fingerprints on it, I don’t want to contaminate evidence.”

“Yes. Under the sink in my bathroom. There’re disposable gloves in a box.” She cocked her head in the direction, indicating he should go and find them. Her legs felt like jelly, and she feared that if she tried to go and get the gloves herself, she’d fall flat on her face.

Within a minute or two, he returned with a pair of gloves that he offered to her. “You’ll have to put them on. They’re too small for me.”

Jessie rubbed her hands, stalling for time. She reached for the gloves and braced herself as if expecting them to send an electric shock up her arms. Doing her best to remain calm, she pushed her hands into the gloves, finishing each with a snap.

He stared at her with an expression of grim determination. “You have to open it, Jessie. If you don’t want to read it, leave it on the table and walk away. I’ll read it if you like.”

Her hands trembled as she plucked the envelope from the fork. The back of it peeled up effortlessly, and she imagined the person who had left it licking it with their vile tongue and sealing it with just enough of their wetness, but not so much as to stick it tight. She swallowed down her revulsion before she gagged on it. Reluctantly, she opened the envelope and eased out an innocent piece of squarely folded pink paper. Flattening it out, she wrenched her gaze away, before she accidentally read its contents.

Being a passionate woman who’s always done things a little differently, Diane’s diverse career began as a school teacher before she moved into a full-time career as a professional choreographer, director and dancer, strutting her stuff on many stages throughout Australia. She was responsible for the original multi-million dollar extravaganzas at Conrad Jupiter’s Casino, Gold Coast—Starz & Galaxies.

Following her onstage career, Diane’s thirst for knowledge led her into the field of self-development. Using her highly developed communication skills and love of people, she spent many years as a stress & life skills therapist and life coach, teaching individuals, couples and groups the methodologies of personal success and fulfilment.

With her business acumen, Diane launched into the corporate arena, working in a variety of positions as a consultant in marketing, special events, tourism, business strategies, quality management and human resource management. Combining her entertainment and business backgrounds, she returned to the stage as a keynote speaker and corporate facilitator, educating business leaders in the ‘new mindset’ for business and relationship building in the 21st century.

Assuming the pseudonym of the Goddess of Love, she appeared as a guest presenter on Gold FM radio, Gold Coast, a national radio program broadcast to 1.4 million listeners. Her weekly program proved popular with Diane providing empowering advice on life, love, sex and relationships, sprinkled with a good dose of humour. Her passion for life and compulsive sharing nature made her a great inspiration to her listeners. As the Goddess of Love she also appeared as a regular guest on the national television program Beauty & the Beast, where her practical insights were televised to viewers across Australia.

Her romantic suspense, Retribution won the Romance Writers of Australia Emerald Pro Award 2017 for Best Unpublished Manuscript. Diane loves to write genre-busting stories with a twist. Her works are packed with emotional punch and feature empowered heroines who live life to the fullest, much like the author herself.

a Rafflecopter giveaway
Follow
Posted by Kim at 1:15 AM