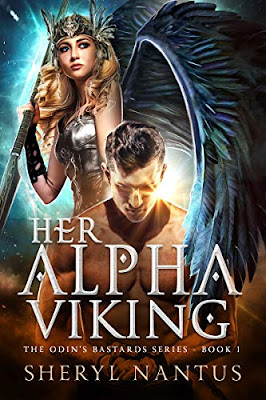 Some loves are bigger than this world…


Former soldier Erik Harrison is a dead man walking. The sole survivor of an ambush, the guilt of losing his friends is crushing. He questions his own sanity, remembering the vision he saw as he was dying –– a battle angel come to collect his friends' souls.

Valkyrie Brenna Lund doesn't know why she failed in her duty to reap Erik's soul on the battlefield. He deserves his place with the other mighty warriors in Valhalla, and if she wants to return home, she has to kill him.

There are consequences for betraying the gods. But the closer Brenna and Erik become, the more they both want to risk everything for a future together. If only an immortal hunter weren’t sent to kill them both.

Sheryl Nantus is a new to me author. The cover for Her Alpha Viking is what caught my attention. Reading the blurb and learning the heroine was a Valkyrie had me reaching for the book. The first line grabbed me and had me thinking I was in for a good read.

Brenna Lund is a Valkyrie. She’s a warrior princess tasked with collecting the souls of warriors on Earth and taking them to Valhalla. It is a job she’s had for centuries, and one she’s very good at. She’s even one of Freyja’s favorites. Things for Brenna change when she’s sent to Afghanistan to collect the souls of military personnel killed in a rescue mission. As she’s collecting souls, she comes across Erik Harrison, the leader of the squad. Erik isn't supposed to see Brenna. He definitely isn’t supposed to see what she’s doing or have the ability to speak to her.

Erik Harrison knows his last moments on Earth are going to be watching members of his team succumb to their injuries. Erik knows there isn’t much time left for him either. Laying on the hot sand, he’s drifting away. He’s finding peace when a beautiful blond woman appears before him. When he sees her taking the life of his people, he screams in protest, challenging the woman. Brenna is surprised by Erik’s actions, but she’s more surprised by her own. In a move out of character for her, Brenna kisses Erik and leaves him to be rescued.

For failing to collect Erik’s soul, Brenna is banished to Earth to kill him and send his soul to Valhalla. Brenna believes this is the only way for her to return home. She knows what she must do, but she has to find Erik first. What Brenna doesn’t know is that she isn’t the only Valkyrie on Earth looking for Erik. Kara, her Valkyrie sister, is tasked with killing Erik and seeing him to his rightful place in Valhalla. She’s also tasked with killing Brenna and sending her to Helheim, as punishment for her misdeeds. And so the cat and mouse game begins with Kara as the hunter and Erik and Brenna as the hunted.

As Brenna and Erik run for their lives, they meet new people who become friends. They themselves also become friends and ultimately lovers, never knowing the kind of love they now share. As with everything, their time runs out and the result is an epic fight worthy of any warrior preparing for Ragnarok.

Her Alpha Viking was a good story that had the potential to be a great story. For me, I felt the story dragged on too long in the middle. I wanted more fight scenes in the middle of all the kumbaya and love. However, I was thoroughly impressed with how Sheryl resolved the conflict. If I’m being honest, I have to admit the story brought tears to my eyes. The final fight and aftermath were definitely my favorite parts of the book. After such a high, the ending was a little bit of a let down. However, it does allude to more books. I’m looking forward to the next book in this series. I’m curious to see what Sheryl is going to do next.