Review ~ SECOND TO NONE by Nancy Herkness 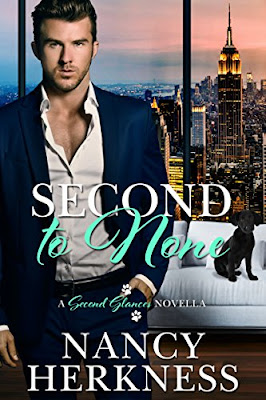 Billionaire chemist Max Varela is selling his company and leaving New York for good when Emily Wade bursts into his office, desperate for his help in funding her program for disadvantaged kids and shelter dogs. Seven years ago, he fell in love with her when she was married to another man. To fight the unbidden attraction, he cut off all contact—but he’s never forgotten her.

Ever since her husband died, Emily has poured her heart and soul into the after-school care center. Seeing Max reawakens the pain of her loss, but it also brings unexpected hope for the future. As emotions thought long gone resurface, the two begin a passionate affair that seems destined for a fairy-tale ending.

That is, until Max reveals that he’s moving to Chicago in a matter of weeks and wants Emily to uproot her daughter and her life to come with him. If a second chance at love is possible, someone’s got to give.

Second to None was a nice read and good start to the Second Glances series. The story re-introduces two people who knew each other years earlier as friends.

Seven years ago, Emily Wade was married to the love of her life, had a toddler, and was enjoying life as a military wife. Her husband Jake was a US Marine Captain. He spent six months testing and working with Max Varela on a body armor for soldiers. The two spent a lot of time together, with Jake often inviting Max over for dinner. As a result, Max and Emily became friends. But once testing was complete, Max severed any and all ties with the couple.

Three years ago, Emily and her daughter Izzy’s lives were turned upside down, when Jake was killed during a mission. Emily relocated from Camp Lejeune, North Carolina to Harlem, New York. Since then, Emily has worked for the Carver Center as its director. The non-profit helps disadvantaged kids in South Harlem. The center wants to incorporate rescue dogs into its program, but funding for the project has been denied by Max’s charitable foundation. Hoping to capitalize on her past friendship, Emily meets with Max hoping he will reconsider.

As always, Nancy Herkness has written likeable characters, both main and secondary. She manages to bring passion and emotion to Second to None. I would suggest having a tissue handy. Overall, I enjoyed the story but not as much as her previous books. My biggest problem was that Emily had no problem having feelings for and sleeping with Max, who was friends with her deceased husband years before. At no time in the past did she have romantic feelings or thoughts about him. I would have liked to have seen her struggle with her attraction instead of just acting on it so quickly. Regardless, I’m looking forward to this series. I just hope when it comes to the dogs, I don’t end up crying ugly tears.


Purchase Second to None from:
Amazon | Audible | Goodreads

Second Time Around is now available.

Nancy Herkness is the author of the award-winning Whisper Horse series, published by Montlake Romance, as well as several other contemporary romance novels. She is a two-time nominee for the Romance Writers of America’s RITA® award. Her new series, Wager of Hearts, follows the romantic adventures of three very wealthy men who make a life-changing bet.

Nancy is a member of Romance Writers of America, New Jersey Romance Writers, and Novelists, Inc. She has received many honors for her work, including the Book Buyers Best Top Pick, the Maggie Award for Excellence in Contemporary Romance, and the National Excellence in Romance Fiction Award. She graduated from Princeton University with a degree in English literature and creative writing.

A native of West Virginia, Nancy now lives in suburban New Jersey with her husband, two mismatched dogs, and an elderly cat.