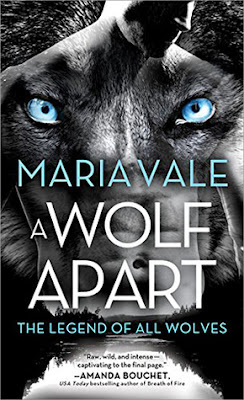 Can a human truly make room in her heart for the Wild?

Thea Villalobos has long since given up trying to be what others expect of her. So in Elijah Sorensson she can see through the man of the world to a man who is passionate to the point of heartbreak. But something inside him is dying…

Elijah Sorensson has all kinds of outward success: bespoke suits, designer New York City apartment, women clamoring for his attention. Except Elijah despises the human life he’s forced to endure. He’s Alpha of his generation of the Great North Pack, and the wolf inside him will no longer be restrained…

A Wolf Apart is the second book in Maria Vale’s The Legend of All Wolves Series. I read the first book, The Last Wolf, and couldn’t wait to read this one. It picks up not too long after the first one. However, you do not need to have read the first book to get a good understanding of what’s happening. You will definitely get much more background from The Last Wolf, but there is enough information given in A Wolf Apart that you wouldn’t be totally lost.

In A Wolf Apart, the hero is Elijah Sorensson, a wolf and member of the Great North pack. The pack has the ability to change into human form. These wolves have been around for thousands of years and have learned how to do quite well in the human world. Elijah is one of the Alphas. He only makes it home for 3 days a month for The Iron Moon which is when all wolves are forced to be in wolf form for 3 days. The rest of the the time Elijah is an attorney at a prestigious law firm who secretly handles their affairs. Elijah has been Offland for 30 years and he is itching to be back home with his pack full-time. Unfortunately, that can’t happen and it begins to wear on Elijah. He feels disconnected from everyone and everything except when he meets a human named Thea. She changes his whole perspective and also has him breaking some significant pack rules.

As with The Last Wolf, Maria Vale does a great job of creating this amazing supernatural mythology regarding this wolf pack that is a lot different from other wolf lore. That’s really what makes me love this series. Plus, you really get a feel for what it’s like to be a wolf in a human lead world. Elijah is dedicated to his pack and has a lot of disdain for humanity yet he works with them everyday. When Thea shows up to his firm as a client needing assistance, he is drawn to her in a way that he has never been drawn to any other being. She doesn’t have a hidden agenda and has no idea what he really is. The way that she finds out is unexpected and her reaction is genuine. I really appreciated how the relationship unfolded. I was also glad to see that some of the storyline from the previous book continues in a natural progression. There were a lot of good life lessons that were explored. Plus, there is a good amount of heat between the sheets to keep things interesting.

It’s going to be hard for Maria to top what she has done so far but I look forward to seeing what happens next. I’m not totally excited about how A Wolf Apart ended which is why I give it 4.5 stars. I felt like the Maria could have given us a little bit more.

You can read an excerpt of A Wolf Apart here.