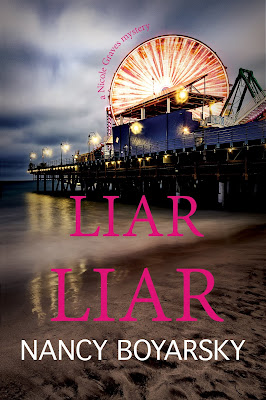 Nicole Graves finds herself in the crosshairs when she reluctantly agrees to babysit a witness in a high-profile rape trial. Mary Ellen Barnes is suing her university’s star quarterback for rape when the authorities won’t act. In the court of public opinion, Mary Ellen appears to be the quintessential, pious, good girl. But her lies and mysterious comings and goings lead Nicole to suspect that she’s not what she seems.

It isn’t just Mary Ellen who’s acting suspiciously. No one wants to own up to the truth in Liar Liar, not even Nicole, whose fiancé begs her not to look into the case. But when the witness goes missing during the trial, Nicole is caught up in a tangle of lies that turns deadly. After the investigator assigned to the case fails to do his job, Nicole is determined to find the killer on her own, no matter the risks.

Nicole heard a sound and came in from the balcony in time to see Mary Ellen, now fully dressed, slip out the front door. Nicole ran after her. She couldn’t allow the girl to run off after what she’d said about the hopelessness of her predicament. By the time Nicole got to the elevator bank, it was empty. The girl was already on her way down.

Nicole couldn’t take the stairs; she was on the tenth floor. But the elevator bank had four cars, and luck was with her. Moments later, the door to another elevator opened. When she reached the lobby, she caught sight of Mary Ellen through the window. She had just left the building and was jaywalking across Ocean Avenue toward the beach.

Nicole rushed after her. The wind was picking up, blowing through her jacket. She was halfway across the street, when a car heading south skidded to a stop a few feet away. The driver leaned on his horn and opened his window to scream at her. She ignored him, trying to keep Mary Ellen in sight. The girl seemed to be headed toward the shoreline. When Nicole reached the sand, she started running. She was in good shape, but running on the beach was completely different from a morning jog around the neighborhood. Her shoes sank into the soft surface, making it impossible to gain momentum. Meanwhile, sand leaked into her shoes, chafing her sockless feet.

The beach near the waterline was dark, and Mary Ellen was no longer in sight. Nicole looked desperately around, trying to figure out which way the girl had gone. All at once she stumbled over something lying in her path. As she hit the sand, the figure she’d tripped over slowly sat up, like a zombie in a horror film. 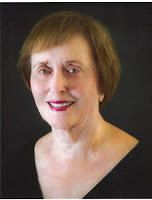 Nancy Boyarsky is the bestselling author of the award-winning Nicole Graves Mysteries.

Before turning to mysteries, Nancy co-authored Backroom Politics, a New York Times notable book, with her husband, Bill Boyarsky. She has written several textbooks on the justice system as well as articles for publications including the Los Angeles Times, Forbes, and McCall’s. She also contributed to political anthologies, including In the Running, about women’s political campaigns. In addition to her writing career, she was communications director for political affairs for ARCO.

Liar Liar is the third Nicole Graves novel, following The Swap and The Bequest, each of which can be read as a stand alone.

You can follow the Liar Liar Blog Tour here.