Interview, Excerpt & Giveaway ~ WHERE THE RIVER BENDS by Elsa Winckler 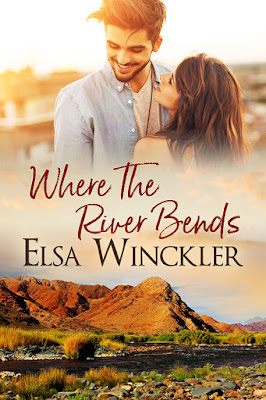 Kalinda Evans works for the Anglo-Boer war foundation in Canada. She's sent to South Africa to make sure everyone who lost their lives in the war will be remembered. On her drive to the guest farm in Kimberley, South Africa, Kalinda picks up a female hitchhiker and is startled when just moments later, the woman vanishes. Kalinda would be convinced she was dreaming…except there’s still a white lace handkerchief on the passenger seat.

Extreme sports enthusiast and computer game designer Zack Carter is always after the next big challenge. He’s far too busy for romance and adheres to a three-date rule, until he meets his parents’ latest guest. When she relays the story of her mysterious experience, Zack’s family shares the local ghost story. Kalinda and Zack work together to solve the puzzle of the ghost and how it all ties in with the war and the work Kalinda is doing.

As their attraction grows, Zack realizes he no longer feels the need to prove anything to himself. He only needs to prove to Kalinda that he’s more than a good time.

Hi Elsa. Welcome to Read Your Writes Book Reviews. How are you?
I’m well, thanks. It’s winter in South Africa and it’s a cold one this year!

I hope you’re sitting by a nice fire. Tell me about your characters Kalinda Evans and Zack Carter.
Kalinda was in an abusive marriage, fled to Canada where her cousin Erika found her another job an she’s now working for an Anglo Boer War Foundation. She’s wary of men and tries her best to ignore the spark she feels when she meets Zach. Zach had asthma as a child and he’s still trying to prove he’s not the little boy who had to stay indoors and play computer games while others played outside any more. So he chases after extreme sports events, the more dangerous, the better. And women? Well, he has a rule – after three dates he walks away and that has never been a problem until he meets the new guest on his parents’ guest farm.

What do you like/love about them?
I like to think they’re life-like characters – they’re flawed, they both carry the burden of their pasts with them. Kalinda’s ex-husband arrives on the scene and she’s forced to face her biggest fear only to realize that she’s become stronger. Zach finally realizes he doesn’t have to prove anything to himself or anyone else, he only has to convince Kalinda to give their love a chance.

What captured my attention about Where the River Bends was the hitchhiker Kalinda picks up. Turns out the hitchhiker is a ghost. Tell me about her.
I grew up listening to stories about the unexplained and in South Africa there are several stories about ‘ghosts’ people claimed to have seen. I thought about this when I discovered that eleven Canadian nurses accompanied the regiment of soldiers that was sent to South Africa to help the British during the Anglo Boer War. And the question that of course popped into my head was what if one of them fell in love with a Boer?

What are some fun facts about the book?
Not a ‘fun’ fact really, but this story touched someone’s life in a way I couldn’t have imagined. The story was originally written in Afrikaans and a reader contacted me after she’d read it. She'd also been in an abusive marriage and after reading this story she understood for the first time that what had happened to her, wasn’t her fault. She’s now able to share her story with others on her blog and she helps and inspires other women who are or were in the same situation.

I’m glad you were able to help someone. Domestic abuse is a horrible thing and a lot of people either don’t acknowledge it happens or blame the victim. Let’s change the subject to something not so emotion evoking. Tell me about one of your favorites scenes from the book?
I loved writing the scene where Zach finally returned to Canada to tell Kalinda he loves her. After the race on Lake Baikal in Russia, he also went to see her, but when they began talking about Suzie’s baby, the mere thought of children freaked him out and he left quickly. This time, however, he knows for sure what he feels for her. He’s had a dream you see, one that finally made him realize what he feels for Kalinda was a deep and never-ending love.

What’s next for you?
Tule Publishing will be releasing a series of three stories about three dashing billionaires from South Africa and the women they fall for – I can’t wait!

"Well, well, well and what do we have here?" It was a new voice.

Kalinda glanced towards the door. At first she thought it was Luke, but then ice blue eyes landed on her and she realised this was someone different. Entirely different. He radiated energy; his mere presence seemed to fill up the room. Something inside of her moved. Breathing was suddenly difficult.

Like Luke, this man was big and tall. And, like Luke, he was attractive. Impossibly attractive. He had Luke's black hair and bushy eyebrows, but there the similarities ended. Instead of a clean-shaven face, he had what was probably a week’s worth of stubble and instead of Luke's easy, open smile, his was mocking. Challenging. And it was doing strange things to her insides.

Her reaction to him was also totally different. She'd smiled easily when she'd seen Luke but now she couldn't get her mouth to move. Her tongue felt too big, her legs were rubbery, and her heartbeat had increased rapidly. What the hell?

She quickly looked down at her hands, willing herself to breathe. But her body refused to behave normally.

"Zach!" Madeline called out and rushed forward to hug him. "I didn't know you were coming to visit." She cupped his face. "What's wrong? Why are you so pale? Has your asthma been bothering you again?"

He smiled and grabbed her hands. “Relax, Mom, nothing happened; I'm fine. I'm pale because I've been to the Antarctic."

"But that was in November last year …"

Ignoring his mother, he crouched down in front of Kalinda. "Who is this gorgeous woman and what is wrong with her hands?"

Kalinda thought it safest to keep looking down on her hands. What this guy did to her insides was ridiculous. He even had a dimple, for goodness' sake.

Madeline sat down next to her again. “Miss Evans …"

"Kalinda. My name is Kalinda."

Madeline patted her arm. "Kalinda is from Canada and she will be a guest here for a week. We only expected her to arrive tomorrow, but then we found her on the road. On her hands and knees. She still has to tell us what happened," she added teasingly.

Zach took Kalinda's hand in his and turned it, palm upwards. The minute he touched her, the air around her became too thick to breathe. Damn it, this was ludicrous. He was merely a man.

I have been reading love stories for as long as I can remember and when I ‘met’ the classic authors like Jane Austen, Elizabeth Gaskell, Henry James The Brontë sisters, etc. during my Honours studies, I was hooked for life.

I married my college boyfriend and soul mate and after 43 years, 3 interesting and wonderful children and 3 beautiful grandsons, he still makes me weak in the knees. We are fortunate to live in the picturesque little seaside village of Betty's Bay, South Africa with the ocean a block away and a beautiful mountain right behind us. And although life so far has not always been an easy ride, it has always been an exciting and interesting one!

I like the heroines in my stories to be beautiful, feisty, independent and headstrong. And the heroes must be strong but possess a generous amount of sensitivity. They are of course, also gorgeous! My stories typically incorporate the family background of the characters to better understand where they come from and who they are when we meet them in the story.

You can follow the Where the River Bends Blog Tour here.