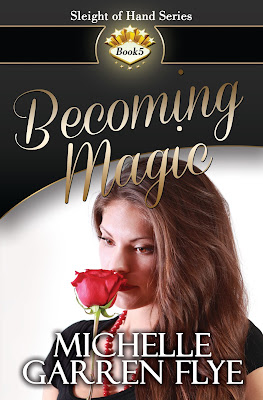 Carole Barnes once believed she would make her own way in Hollywood, but those days are long gone, leaving behind only a dark, slimy secret that Carole has never shared with anyone. Now she hides in the bright sunshine of the Crystal Coast of North Carolina. As far away as she can get from Hollywood. But what to do when Hollywood comes knocking in the form of a sexy movie star?

Connor Wallace has everything going for him—looks, talent, a successful career—but what he really wants is to perform magic on stage. His love of magic leads him back to his mentor Walt Bryson. At first, he’s pleased when Walt suggests his assistant Carole produce a documentary of his transformation from movie star to magician. He’s worked with Carole before—but the ambitious girl who had a crush on him is gone now, leaving a beautiful, withdrawn woman.

It’s the perfect arrangement. Carole knows she can make a success of the movie and Connor wants to work with her. But as they grow closer, Connor determines to find out her secret. Can love overcome the boundaries of fear? Or will Carole’s past return to plague them both?

What do you have to do to help another person heal? When innocence and faith are taken forcibly with an act of cruelty, can love really help?
That’s the challenge I presented my couple in Becoming Magic. Carole was sexually assaulted and Connor wants to help her. They’ve known each other for a while, and Carole even had a crush on Connor for a while. But now he symbolizes everything that once hurt her and that she still fears.

How is Connor supposed to help her?
Connor is actually my favorite of all the heroes I’ve dreamed up. He’s got everything going for him—looks, talent, money and that elusive star quality that we’ve all seen but only a few of us have ever mastered. The ability to make people want to be your friend. Connor is meant for the spotlight, but he also sees more in the withdrawn woman he once knew as a capable, happy college girl.

Determined to help her, Connor digs a little deeper. When Carole throws up a wall, he agrees to her rules but he doesn’t stop. In the end, it’s his persistence combined with his patience and kindness that conquers Carole’s resistance and heals the scars on her heart and soul.

She reached for a handful of popcorn and her hand brushed his. When she turned her head and met the gaze of the same pair of clear blue eyes as those on the screen, her heart skipped a beat and she froze. For an eternity of a half second, neither of them moved, then he slowly turned his hand over and folded his fingers over hers. “Is this okay?”

“Yes.” She breathed the single word, then added, “And no.”

“No?” He raised his eyebrows.

“I really want some popcorn.”

“And I still really want to kiss you.” His eyes flickered down to her lips. Then he sighed and released her hand. “I guess one of us should get what they want, huh?”

The Sleight of Hands Series:

Michelle Garren Flye is an award-winning romance author of eleven novels and counting. Her short stories have been published by the romance anthology Foreign Affairs, Opium.com, SmokelongQuarterly.com and Flashquake.com, among others. She has served on the editorial staffs of Horror Library, Butcher Shop Quartet and Tattered Souls. Michelle has a Bachelor’s degree in Journalism and Mass Communication from the University of North Carolina at Chapel Hill and a Master’s degree in Library and Information Science from the University of North Carolina at Greensboro. She is the mother of three and lives in North Carolina.

You can follow the Becoming Magic blog tour here.