Character Guest Post, Excerpt & Giveaway ~ THE MEMORY OF YOU by Jamie Beck 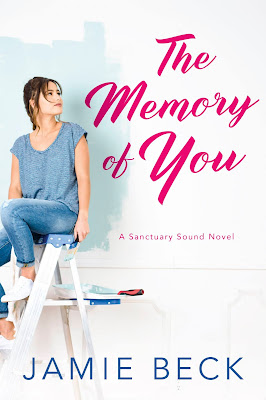 Steffi Lockwood has survived more than most. Recovering from an assault, she returns to her coastal Connecticut hometown to rebuild her life the best way she knows how: with her hands. But starting a remodeling business with one longtime friend puts her in the middle of a rift with another. Worse, being hired by her ex-boyfriend’s mother forces her to confront old regrets.

Public defender Ryan Quinn wasn’t shocked when his wife left him, but he was floored when she abandoned their daughter. With his finances up in the air, the newly single dad returns to his childhood home in Sanctuary Sound. The last person he expects, or wants, to see working on his family house is Steffi Lockwood—his first love who shattered his heart.

Although Steffi and Ryan are different people now, dormant feelings rekindle. But when Steffi’s secrets begins to surface, will it bring them together…or tear them apart for good?

Thank you so much for inviting me to talk about Sanctuary Sound, I'm Steffi Lockwood. I admit, it is strange to be back in my sleepy hometown after spending so much of my youth wanting to escape to something bigger and, in my mind, better. But life in Hartford didn’t live up to my dreams. I wouldn’t say I left because I got attacked, but it was a wake-up call for all the ways that life wasn’t really making me happy. One night while watching my favorite HGTV show, I got inspired to quit my construction job and return home to start my own home renovation business with my childhood friend, Claire, a designer.

While I enjoy the quiet beauty of our small coastal Connecticut town and am happy to reconnect with Claire, my dad, and my brother Ben, my homecoming isn’t all roses and sunshine. Although my mom died long ago, I can’t help but miss her when I’m at my dad’s house on Lilac Lane. I’m also dealing with some kind of brain fog, most likely from the many concussions I’ve suffered, including the last one I got when attacked. Then there’s the rift between Claire and our other dear friend, Peyton. We used to call ourselves the Lilac Lane League and were the closest of friends. I really relied on that sisterhood (having only brothers, myself). Now I’m trying to remain neutral, but that’s not easy when I have to live and work with Claire, and she’s still brokenhearted because her ex ran off with Peyton. But the biggest regret that follows me around town has to do with memories of Ryan Quinn, my high school sweetheart—the greatest guy in the world that I was dumb enough to ghost in college.

Like I mentioned, when I was younger, I thought I wanted a bigger life. I didn’t want to be like my mom, who married and died young without ever seeing anything of the world. I wanted adventure, and to get that, I had to break free from town and from Ryan. Fast- forward to now, when his mom just hired me to convert her porch to a family room. I didn’t know she needed to expand her house because Ryan’s marriage imploded and he’s just returned from Boston with his young daughter, Emmy. Let me tell you, ours was not a pleasant reunion. I did my best to apologize and be polite, but there’s only so much shaming I can take before I push back. Still, I’m not the same young girl I was back then and I’d love a chance to make amends with Ryan. His daughter is a real spitfire who makes me laugh, too.

Whatever happens with Ryan, I know I can take care of myself and make a success of this business, especially once this stuff with my memory heals. If I can also help my friends repair their relationship and win Ryan’s forgiveness, too, I’m going to try. At the very least, I can be the kind of friend to his daughter, Emmy, that his mom was to me when I needed one. Wish me luck!

“I do understand, Emmy. Better than you think.” Steffi took the partially folded tarp and snapped its final fold on her own, then crouched to Emmy’s eye level. “I wasn’t much older than you when my mom died. I missed her so much it felt like the whole world turned into a dark black hole. Most days I wanted to jump right through that hole and follow her to heaven. I was so angry that she left me like that, even though she couldn’t help it. But I kept all those feelings tight inside, like a ball right here.” Steffi pointed at Emmy’s stomach. “Holding all that stuff inside hurt, but it made me feel strong. It seemed better than crying, for sure. Then a girl named Claire moved in across the street. She was very sweet and sporty, and I liked her right away. I was lucky because she was patient with my moods. And at the end of our street was another girl our age, Peyton. Peyton was popular, but it turns out she was kind of lonely, too, for other reasons.

“Anyway, somehow that summer we all started spending time together. We gave ourselves a name—the Lilac Lane League—and we started a journal, because Peyton liked to write. We wrote down our dreams and the things that made us mad, and the things that made us laugh. Our crushes, first kisses, all that stuff. Little by little, that knot in my stomach unwound because my friends made me less lonely. That’s how I know the fastest way to feel better is to make a new friend.”

“I am your friend, but you also need a friend your age. I know you miss your old gang, but try to make one new friend here, too. I promise there are nice girls. I grew up here, after all, and I’m nice.” Steffi smiled and brushed some of Emmy’s curls off her face.

Ryan decided to enter the conversation now, before Emmy broke down in front of Steffi or put her in a more difficult situation. He exited through the kitchen door and crossed the partially framed porch to get to the yard. “Hey there, ladies.”

Emmy snapped her gaze at him, and he saw the panic in her eyes. His daughter’s fear of him speared his chest like a sword. He’d failed at his marriage, and his daughter was paying the highest price. He couldn’t fail her, too. He dropped to his knees and opened his arms. She flew into them in a heartbeat.

He hugged her and swayed, like he’d done when she was so much younger. Steffi quietly retrieved her toolbox and took it to her van.

“Emmy?” Ryan asked once they were alone. “I’m sorry this is such a hard time for you. I want to help you, but I don’t always have all the answers. I do know one thing, though. You can’t call people names and expect to make friends.”

She cried against his chest, each tear falling like acid raining on his heart. “Oh, sweetie, it’ll be okay. We all make mistakes. The important thing is to apologize and try to learn from it.”

“You always say that,” she muttered into his shirt.

“Because it’s the truest thing I know.” He kissed her head.

“So why can’t you and Mom apologize and make up?”

He hadn’t expected that question, although maybe he should have. “It’s not that simple.”

“You always say that, too.”

If a conversation with her took this much work at this age, he could barely imagine dealing with her in her teens. “You’re all dirty from helping Steffi. How ’bout you go inside and clean up before dinner? I need to talk to Steffi for a second. Then I’ll come in, and we can figure out how to apologize to Katie Winston.”

Emmy nodded while swiping her arm under her runny nose. “Okay.”

She wandered into the house just as Steffi came back from the van to get the rest of her personal things. He stood to speak with her. “I heard part of what you said to Emmy.”

“It’s okay. Thank you for making her feel like she can confide in you. I should’ve listened to you the other day.” He crossed his arms and blew out a long breath. “I’m in over my head doing this on my own.”

“You’re not on your own. You’ve got your parents. But even if you were, I know you can do it. She loves you. She wants to make you happy and proud.”

He nodded, although he knew he was screwing it all up.

“Well, I’d better take off. Benny’s expecting me for another training run.”

“You guys are disciplined. I haven’t had a chance to get in a good workout in three months. Pretty soon I’m going to be too soft.” He patted his gut. Granted, he was still pretty fit. He could probably keep up with Steffi for a few miles, anyhow.

“I’m sure your mom would watch Emmy if you need to hit the gym or the mean streets of Sanctuary Sound.” She tipped her head, grinning. “My brother might even like some male company now and then. He gets sick of my singing.”

Ryan laughed. “Well, you were good at a lot of things, but singing wasn’t one of them.”

“You didn’t used to complain.” She hit his arm.

He grew quiet for a second, remembering the many times he’d listened to her terrible rendition of Lifehouse’s “You and Me” in the car or on the patio. “No, I never did mind those private concerts.”

The air between them turned sweet and thick with fond memories. Holding hands, soccer footwork challenges, the first time he’d copped a feel, and the light in her eyes when he had. The images almost made him want to take hold of her hand again; his heart beat with that hot desire like it had at seventeen.

“Dad!” Emmy called from the door, breaking the spell.

“You’d better go,” Steffi said with a wistful smile before she turned and walked back to her car.

He watched her go and waited … waited … Just before she got to her van, she peeked over her shoulder at him again, and everything seemed a little bit brighter.


Purchase The Memory of You from:
Amazon | Paperback | Goodreads

National bestselling author Jamie Beck’s realistic and heartwarming stories have sold more than one million copies. She’s a 2017 Booksellers’ Best Award finalist, and critics at Kirkus Reviews, Publishers Weekly, and Booklist have respectively called her work “smart,” “uplifting,” and “entertaining.” In addition to writing novels, she enjoys dancing around the kitchen while cooking as well as hitting the slopes in Vermont and Utah. Above all, she is a grateful wife and mother to a very patient, supportive family. Fans can learn more about her on her website, which includes a fun “Extras” page with photos, videos, and playlists. She also loves interacting with everyone on Facebook.

a Rafflecopter giveaway
Follow
Posted by Kim at 6:14 AM