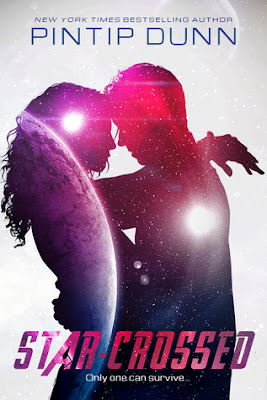 Only one can survive...

Stranded on a planet that lacks food, Vela makes the ultimate sacrifice and becomes an Aegis for her people. Accepting a genetic modification that takes sixty years off her life, she can feed her colony via nutrition pills. But her best friend is still getting worse. And she's not the only one.

Now the king is dying, too.

When the boy she's had a crush on since childhood volunteers to give his life for her father's, Vela realizes her people need more than pills to survive. As tensions rise between Aegis and colonists, secrets and sabotage begin to threaten the future of the colony itself.

Unless Vela is brave enough to save them all…

Hi Pintip. It’s Paige again. Welcome back to my mom’s blog. I have to tell you I LOVED Star-Crossed!
Hi Paige! You’re one of my favorite readers, so it is always a pleasure to talk to you! I’m so glad that you loved Vela and Carr’s story!

My mom says I need to get on with the questions and stop being so excited. I think she called it fangirling. So here goes….
Ha! Feel free to fangirl anytime you want!

Thank you. (Shooting Kim aka my mom a triumphant look.) When writing Star-Crossed, how did you come up with the idea of them going to a different planet?
I knew that I needed a hostile environment that would make land and food scarce. Instead of devastating the Earth (which is kinda sad!), I thought it would be easier to have my characters be people sent to colonize another planet.

I also wanted my characters to be cut off from any help when they arrived on that planet and realized that the terraforming pods had malfunctioned. By putting them on a different planet, they are really on their own, as Earth is a hundred light-years away! Left to their own devices, the people of Dion must come up with their own solution — and that solution is to genetically modify a group of their people so that they could convert food into energy more efficiently.

Wow! That explains everything. The names of the characters are so unique. How did you come up with their names?
With the exception of Vela and some of the original colonists, my characters all have names that are geographic locations back on Earth, either towns, cities, or countries. This is their way of remembering their roots, even if they're flung to a planet across the universe. Plus, I also have a boy named, “Jupiter,” which is clearly a planet, not a location on Earth. Although he has only a small role in this book, he will be a main character of the sequel, SKY-KISSED, along with Vela’s sister, Blanca.

What are some interesting factoids about Star-Crossed?
Oooh, I have lots of fun facts about this novel!

1. STAR-CROSSED was originally titled Fit To Die. It went through several more alternatives, including The Taste of Tears and The Bittersweet Trials, before we settled on Star-Crossed.

2. STAR-CROSSED was the very first novel I sold, although it will be the sixth one that I publish. It was the fifth book I wrote, right after FORGET TOMORROW.

3. The cover of STAR-CROSSED is the third cover that was created. The first two did not fit at all, and the one that we ended up with (in my opinion) is perfect.

5. I consider STAR-CROSSED to be the book of my heart because I wrote it at a time when I was getting pummeled with rejections. I swore to myself that I would write a book so good that they couldn’t reject me — and STAR-CROSSED was the result.

OMG! I am shook. If you could go anywhere in world, where would you go?
I would love to go to Australia! I have a dear author friend, Vanessa Barneveld, who lives there, and I've been promising her for years that I will make a trip out there someday.

That is my dream place too! What is your favorite movie to watch on a rainy day?
Hmmm. I'm not a big movie re-watcher, but I really enjoy romance comedies. If I can watch it with my daughter, even better. Recently, we adored watching TO ALL THE BOYS I LOVED BEFORE together. I also really loved CRAZY RICH ASIANS. It is incredible for me to see all these beautiful Asian actors/actresses on the screen, when my teenaged self didn't think it was possible.

Spring is my favorite because it is the season when the cold thaw of winter is finally lifting. I love any activity that is outside — whether it’s strolling in the park or dining outdoors or white-water rafting!

Interesting activities. How do you come up with the ideas for your books? Do you dream about them, see something on television or read something?
Ideas usually pop into my head when I'm either drifting to sleep or taking a walk. They usually take the form of the question, “Wouldn’t it be cool if...?”

For example, the idea for FORGET TOMORROW came from the question, “Wouldn't it be cool if we could send a memory to our younger selves?”

Likewise, the idea from STAR-CROSSED was derived from the question, “Wouldn’t it be cool if we could extract excess calories from our bodies and transfer them to people who really need the nutrition?” This is a question that my husband and I have been asking each other, after a particular big meal, for the last fifteen years!

Pintip thank you so much for taking time to talk with me. It has really been a honor for you to take time out of your day to talk to me. I really appreciate it.
Thank you for this interview. It's my absolute pleasure.

He lifts his face, uncertainty reflected in his features. He really doesn’t know. He has no clue how much his sister loves him.

The box around my heart tightens. “What about me?”

His eyes land, not on me, but on the blinking amber light around my collar. I remember that there’s more than the two of us in this room. There’s a team of psychologists, and the nameless examiners, and every member of the council.

My hands close around the loop. I switch it off and toss the metal necklace into the corner. And then I walk to the door, lock it, and flip a switch on the wall. A solid panel rolls from the window frame and slides over the one-way glass.

No one’s watching now. No one’s evaluating. I stand before him not as the Princess, but as Vela. The girl who’s always loved him. My actions now aren’t about the Trials. They’re not about the council finding their answers. And they’re certainly not about treating Carr like a data point.

“I care about you.” I step closer, so he can’t ignore me. “How do you explain that?”

“If you like me, it’s only because I saved your life.”

“Really, Carr?” I’m not a violent person, but I wish there was something in this room I could throw. A table, a chair. Something for me to wrap my hands around and hurl at the wall. “Is that why I like you? Because last I checked, I didn’t even find out you rescued me until last week. What about in the red cells? What about when we almost touched? When we should’ve touched, just like this?” I grab his hand and jam our fingers together. Electricity snaps between us. “Did I like you then?”

He stares at our fingers. “I don’t know.”

I take his other hand, and the electricity cycles in a closed circuit between us. “What about the worms?”

He shakes his head, as if my words are from an Earth language he doesn’t understand. “What worms?”

“When we were kids.” I weave my fingers through his, so he can’t pull away. “Do you remember coming to the pond one morning and finding a plate of worms waiting for you? That was me, Carr. I dug for hours before the sun lamps turned on, so you could have the day off.”

His eyes widen. “That was you? Vela, I…” He swallows hard. “That was the nicest thing anyone’s ever done for me.”

He gnaws on his cheek, and I see the doubt in each quick bite of his teeth. He still doesn’t believe he’s worthy of love. And how can I blame him? The barter system is all he’s ever known.

I have one more argument up my sleeve. One last move. The final way I have of convincing him.

My entire body thrums, and my heart beats so fast it might break out of this cage yet. Quickly, before I change my mind, I close the gap between us. Stepping up onto the stone, I reach up and wind my arm around his neck.

“What about this?” I whisper.

And then I press my lips against his.

You can read Paige’s review of Star-Crossed here.

Pintip’s novel FORGET TOMORROW won the 2016 RWA RITA® for Best First Book, and SEIZE TODAY won the 2018 RITA for Best Young Adult Romance. Her books have been translated into four languages, and they have been nominated for the following awards: the Grand Prix de l’Imaginaire; the Japanese Sakura Medal; the MASL Truman Award; the Tome Society It list; and the Romantic Times Reviewers’ Choice Award. Her other titles include REMEMBER YESTERDAY, THE DARKEST LIE, GIRL ON THE VERGE, STAR-CROSSED, and the upcoming MALICE.