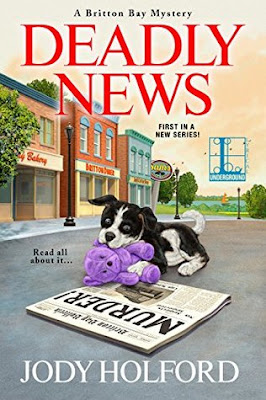 Former Army brat Molly Owens is ready to put down roots, and the picturesque seaside town of Britton Bay on the Oregon Coast seems like the perfect place for it. Especially when she lands a job as editor of the local paper. But she’s got one colleague who’s very bad news...

As an experienced journalist, Molly is eager to bring the struggling Britton Bay Bulletin up to speed. But when she pushes Vernon, one of her less welcoming reporters, to dig a little deeper into the story of a prominent local family, the man ends up dead. The fact that he wasn’t well-liked makes finding the killer extra complicated. The lists of suspects range from his ex-wife to his own son to Molly’s boss, who has a secret of his own. But when Molly’s attempts to sleuth out the truth result in her receiving frightening threats, the trouble is just beginning...

The one bright spot is Molly’s newfound flirtation with Sam Alderich. The sexy mechanic is used to taking things apart and piecing them back together, and between the two of them they just might be able to solve this deadly puzzle—if Molly can survive peaceful small-town life long enough...

Jody Holford has been on my reading wish list for a while. Normally a contemporary romance author, Daily News marks her first time writing a cozy mystery.

In Daily News, Molly Owens moves from California to Britton Bay, Oregon, to become the new editor of the Britton Bay Bulletin, a small town failing newspaper. Molly wants to get more people to read the newspaper both online and in print. Her first course of business is to get staff writers Elizabeth Grover and Vernon East to write better articles; ones people actually care about reading. She immediately clashes with Vernon, who she secretly thinks wanted the editor position for himself. Molly proposes Vernon interview a descendant of the town’s founding family as part of a special interest piece. Days after the interview, Vernon is found dead and Molly can't help but think it's because of her.

While Molly isn't a reporter, she's curious as to the details of Vernon’s death and what really happened. Using her job at the paper as a reason to ask questions, Molly innocently questions various residents. With the help of her landlord's son, Sam Alderich, Molly learns surprising information about Vernon and several Britton Bay residents. As Molly works to pick up the slack at the newspaper left by Vernon’s death, she strikes up a romantic relationship with Sam. Too bad she's closing in on the killer who may just make her the new top story.

Daily News reads more like a romance then a cozy mystery. There seems to be more time spent on the relationship between Molly and Sam then you would normally find in a cozy mystery. For me,that was perfectly fine, as I've always wished there was a little more romance in cozies. Sam and Molly made for good characters. They're both very likable and are people I would love to hang around with. I loved the growing love story between them. Jody has written a good mystery. I found myself thoroughly enjoying the story while trying to figure out the killer. The reveal and the reason Vernon was killed was surprisingly shocking. I think Jody did a very good job. I'm a really looking forward to her next book in the series.