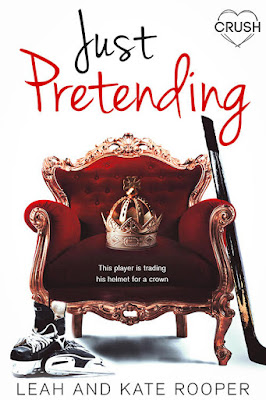 This player is trading his helmet for a crown.

It's not easy being royal. Sixteen-year-old Evangeline wears her crown proudly, but between her duties and her overprotective big brother, the idea of romance is just a dream. But a chance encounter in Chicago changes all that….

Sure, seventeen-year-old Tyler Evans loves playing hockey, but he's more concerned about providing for his dad and little sister. Then he meets Eva--and falls head-over-heels in love—and he has two more problems. One, she's his best friend's little sister. Two, she wears a crown.

But then Eva accidentally mistakes Tyler for a visiting prince, and for the first time, Tyler doesn't feel like a nobody. He knows he has to tell her the truth…but not yet.

His plan? To keep up the royal charade as long as it takes to convince Eva he’s the guy for her. Even if he’s lying to everyone…including himself.

Disclaimer: May cause disillusionment. Those girls looking to find their Prince Charming might consider scouting out hockey rinks.

Below me, the busy streets are lined with cars so small, they look like toys. Miniature people try to hold their umbrellas against the strong wind. Beyond it all, a vast horizon of skyscrapers stretches upward toward the gray sky.

I take a deep breath and step off the edge.

My heart leaps in my chest, and for a moment, I feel like I’m flying.

Then, my heels click on the glass bottom floor. I stare down at Chicago, bustling beneath my feet, and place my hands on the glass wall. I wish it wasn’t there, so I could soar through the city like a bird.

I turn around and smirk at my brother. “I told you. It’s not scary.”

Daniel—who is not afraid of anything—leaps from the solid floor to the glass box I’m in, suspended more than one hundred floors above the ground. “Come on,” he says, poking my side. “You’re terrified!”

I step out farther into the glass box, just to prove him wrong…even though my legs are shaking, and my stomach flip-flops every time I look down. “I’m not afraid of anything, big brother.”

Daniel puts his nose right to the glass. “Just wait till we ride the Centennial Wheel at Navy Pier tomorrow! You won’t be saying that when we’re at the top.”

I sigh. My half-brother has taken it upon himself to show me every must-see attraction in the city. But to Daniel, even the rundown pizza parlor on the corner of his street is a must-see. Today, it was the Skydeck, with its towering architecture and crystal-clear glass box that juts over the city. Yesterday, it was a horse-drawn carriage ride through Millennium Park, and the day before that, we visited the Shedd Aquarium. When Daniel’s at school, his mother’s been kind enough to take on the tour guide role, even though I insisted I would be happy to go with him and see what a real American school is like. Or what any school is like, really. I’ve had a private tutor since I was two years old.

But now, it’s become ridiculous. Daniel was supposed to be at school today and his mother had to work. I thought I might have a few hours to explore the city by myself, but Daniel insisted on skipping class to keep an eye on me. I should rat him out to the principal.

“But look, Eva,” Daniel says, pointing outward. “This is the tallest building in the western hemisphere! You can see four states from up here.”

“You do know,” I say, “that if you climb to the tallest tower in our castle, you can see five different countries?” Daniel gives a dry laugh. “Sure, but knowing Lyle Worthington is the duke of one of those countries really spoils the view.”

I smile. I know Daniel’s just trying to be a good host, but I haven’t had a moment to myself since I arrived. When Mother agreed to let me have a week off from royal-duty in October to visit Chicago, I was so excited. One week without any responsibilities, expectations, or having my every move scrutinized. One week where I could just be a normal teenager, instead of the Queen of Eldonia.

But instead of Mother watching my every move, now it’s my half-brother Daniel. He won’t let me go anywhere without him or his mother, and he seems determined to stop me from experiencing the things a normal teenager would. I think my big brother has forgotten I already have a bodyguard.

“So, what’s our plan after we look at the four states?” I raise a brow.

“Well,” Daniel says, running a hand through his slick black hair, “I’ve gotta go to hockey practice, so I was thinking I could drop you off at home. Ma left some food in the fridge—”

“I’ll come and watch your practice!”

“Won’t Madison be there?”

“Yeah, but she’ll be working, doing her trainer stuff. And Al will be on the ice.”

Daniel has just listed my only other friends in Chicago. “Dwayne can keep me company.” I nod in the direction of my bodyguard, who is standing off to the side, watching us from beneath a pair of thick black sunglasses.

A muscle ticks in Daniel’s jaw as he considers my suggestion. Daniel might have made sure I saw every attraction in Chicago twice, but he hasn’t let me spend any time with his friends. Besides one dinner with his girlfriend Madison and walking around Grant Park with his teammates Hayden and Alice, I haven’t talked to a single person our own age.

He’s kept me so busy, I can’t help but wonder if he’s purposely trying not to introduce me to any of his other teammates. I study his face. He looks oddly serious for once. “The thing is, Eva…”

“What is it?” I’m not sure I like this paranoid version of my brother.

“I love my teammates. They’re great. I’m just worried about introducing you to them.”

“Because they’ll be too dazzled by my amazing personality?” I joke and toss my hair over my shoulder.

“Yes.” Daniel doesn’t smile. “They won’t care about you at all. They’ll just care about your title. Believe it or not, we don’t get many queens in Chicago.”

His words tug on a familiar shard in my heart. This is nothing new. I’ve been the princess of Eldonia to everyone I’ve met since the day I was born, and now I’m the queen. I don’t have the luxury of living across the sea from my royal title and responsibilities like my half-brother. Although his words hurt, it’s a truth I’ve learned to accept. But that’s not going stop me from having fun this trip.

“Don’t worry so much.” I smile sweetly and decide to appeal to the one thing that will always get him—his love of hockey. “This is your last season playing for the Falcons. I want to watch as much as I can!”

His face falls. “I can’t believe it’s our last year all together. It’s surreal.”

“If you’re so sad about it, why can’t you all just keep playing for the Falcons?” I bump against him.

Daniel snorts as if the answer is obvious. “Because we’re finally eligible for the NHL draft! Rumor has it, Tremblay’s going to be the number one pick. But Coach says I have a real shot at getting picked up by a team, too. Even if I have to play for a farm team for a few years, it would be amazing.” He looks away. “But that means this will be the last year Hayden, Tyler, Alice, and I play together. It’s our last chance to win the whole thing.”

I loop my arm through his and lean my head on his shoulder. “That’s why you should let me watch your practice tonight. I want to see the four musketeers all play together!”

I stand on my tiptoes and give him a kiss on the cheek. “Whatever you say, Dan-Dan.”

He rolls his eyes and heads back toward the solid floor, taunting Dwayne, who hasn’t dared step on the glass.

I take one last look at the sprawling city of Chicago. This place is so different from Eldonia. Compared to the quaint little houses, the cobblestone streets, and the antique buildings of my homeland, this makes me feel like I’m in a different world.

And in this world, no matter what my brother says, I could be just another girl. Not a princess. Not a queen. Just Eva.

Daniel said that his teammates would only see my crown, not me. But I’ve watched the way he is with his friends, and I’ve seen the way they treat him. When Daniel was in trouble last summer, most of the Chicago Falcons came to Eldonia to help him pull off something amazing. They were there for him. His hockey team doesn’t care about my brother’s title…

So maybe they won’t care about mine, either.

My gaze shifts to the glass. I look at my reflection, staring back at me, transparent as a ghost. Other reflections wisp through mine—strangers passing through my body, completely unaware.

The thought makes me feel light, free. Maybe for a few more days, I can just be a ghost, not leaving a trace.

I turn on my heels and walk over to Daniel. “Let’s go meet the team!” 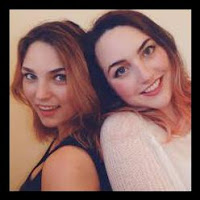 Leah and Kate Rooper are sisters from Victoria, British Columbia, Canada. Growing up beside the Pacific Ocean and inside a temperate rainforest fed their sense of adventure as children, and nourished a curiosity for strange and distant lands. They fed this curiosity with books - lots and lots of books. After experiencing the magic of Middle-earth, they began creating their own worlds. When they're not writing, Leah and Kate spend their time blogging and vlogging about their travel adventures and their writing journey.

You can follow the Just Pretending Blog Tour here.