Guest Post & Excerpt ~ MORE THAN THIS by Shannyn Schroeder 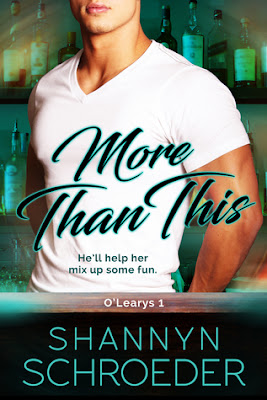 A sexy bartender stirs up a daily lesson plan for an adventurous teacher...

When she discovers her ex-husband is about to be a father, Quinn Adams is on a mission. Determined to get pregnant without the commitment of a man, Quinn sets out for her own adventure. But everyone seems to think she need to focus on herself first. With a list of challenges compiled but her sister and their friend, Quinn embarks on some life-altering fun.

Her first challenge is to go on five dates within two weeks. After a few disastrous attempts, Quinn’s ready to give up—until sexy bartender Ryan O’Leary offers his assistance. Ryan is the go-to person for everyone in his large family, so it’s natural for him to want to help Quinn. However, as they get to know each other better, friendship with Quinn isn’t enough for him. Now, it’s time for him to show her how serious the Irish can be. Will the bartender quench Quinn’s thirst by mixing up more than she ever imagined?

Thanks for having me today, especially since I get to talk about my hero, Ryan O’Leary. I have a couple of confessions to make. The first is that I’m a little in love with Ryan. The second is that when I started writing, I had no idea who Ryan was.

When I came up with the idea for MORE THAN THIS, I had a pretty clear picture of who my heroine, Quinn, was, but I was less sure about Ryan. I love to read a strong alpha male and I was sure that’s who Ryan was going to be. Turns out, I was wrong. When I started writing, all I knew about Ryan was that he came from a big family. What I discovered is that his family is his priority.

Overall, Ryan is just a good guy. He doesn’t have weird hangups or excess baggage (no abuse or horrible childhood or cruel ex-girlfriend who broke his heart). I think it’s easy for readers to fall in love with Ryan because he is a good guy. He’s not overly bossy and he’s not mean. He’s protective and caring, without being a wimp.

His sense of duty and responsibility for his family is what prevents him from finding what he wants in life. Ryan feels a need to be everything for everyone all the time. He runs his own bar and the family’s pub on top of fixing things around his mom’s house and making sure his siblings are taken care of. While all of this is well-meaning, it prevents Ryan from having much of a personal life. Did I mention that all of his siblings are adults? He has a hard time trusting that they’ll be okay if he’s not there to make sure. His conflict comes from this, which made it hard to strike a balance.

Things change for him when Ryan meets Quinn. He wants to be everything for her, but that means he needs to loosen the control on his family. Ryan has to learn to trust his family to be okay while he’s convincing Quinn that they should be more than friends.

Kim asked if I had an inspiration for Ryan, and I do. Jason O’Mara is my inspiration. Although as Ryan his hair would be a little darker and a tad longer, he’s pretty damn good (smile). 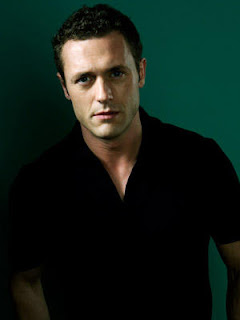 Ryan stood at the opposite end of the bar from Quinn’s booth. Watching in the mirror, he saw a new side of Quinn. She was relaxed. When she’d first come into the bar with a crowd of teachers, she’d hung back from the group, ordered one drink, gulped it down, and left. It was like she had to make an appearance and she did the bare minimum. Now, she’d invited other friends here.

He couldn’t believe he’d almost been busted eavesdropping on her conversation. And, of course, it had to happen right when they got to a good part. He wanted to know if she got laid for her birthday. Judging by the way she looked when she came in, she hadn’t been given a birthday orgasm. He almost wanted to offer to change that, but knew she’d shoot him down.

A slight tap on his arm had him turning to look at his younger brother, who was supposed to be stocking alcohol.

Michael hitched his chin up toward the mirror. “The one you’ve been staring at.”

“Oh. That’s Indy, but I was looking at her sister. Short dark hair.”

Michael looked at all three women. “She’s not your usual type.”

“I know.” The concept rubbed at him like a wool sweater.

Shannyn Schroeder is the author of the O’Leary series, contemporary romances centered around a large Irish-American family in Chicago and the Hot & Nerdy series about 3 nerdy friends and their last spring break. When she’s not wrangling her three kids or writing, she watches a ton of TV and loves to bake cookies.