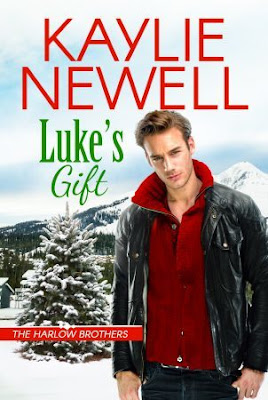 After serving in the Army, Luke Harlow returns home in time for the holidays to help his brothers raise their twelve-year-old half-sister. With his new job as Marietta’s police officer, Luke finds himself in the middle of a festive mystery that the entire town will want solved before Christmas morning.

Mary Best is Marietta Courier’s most promising young reporter. When she starts spending time with sexy Luke Harlow to write an article about his heroic military service, she begins to suspect there’s more to this new police recruit than meets the eye. He’s kind, generous, and very mysterious. When anonymous gifts start appearing around town for people in need, Mary knows there’s a story there. A magical one. It doesn’t take long for the breadcrumbs to lead right back to Luke.

As the gifts pile up, so does everyone’s urge to unmask Marietta’s secret Santa. Luke is deeply private, and Mary is deeply curious- opposites who’ll find themselves tumbling toward each other amidst the snowy backdrop of a town fully embraced in the spirit of Christmas. But when Mary uncovers Luke’s secret, will she be able to bury her reporter’s instincts for the sake of love? And will Luke finally be able to trust someone with his heart?

Hi Kaylie. Welcome to Read Your Writes Book Reviews.
Hello! Thank you for having me.

You’re welcome. Congratulations on the release of Luke’s Gift. Before we get started I have to say the Harlow brothers sound great. What can you tell me about Luke’s Gift?
Thank you! I do love this series. Three sexy bachelor brothers find out they’re the guardians of their eleven year-old half-sister, so they all move back to their small, Montana hometown to raise her.

Luke is coming home to Marietta from his third tour in Afghanistan when he meets local newspaper reporter Mary Best. Mary’s always looking for a story, and it doesn’t take long to see Luke would make a great one. But when anonymous Christmas gifts start showing up around town and Mary starts to suspect that Luke is behind them, her story turns into a festive mystery that all of Marietta will want solved before Christmas morning. It’s a secret Santa story, with a little Robin Hood twist, and some heat thrown in for good measure!

Tell me about Luke Harlow and Mary Best, and why do you think they work as a couple?
Mary is very guarded because of the way she was raised. She’s also very curious as a reporter, and believes everyone has a story. Luke believes in the overall goodness of people, but is intensely private. Together, there’s a natural chemistry because in a lot of ways they’re opposites, but at their core, they’re very much the same. They just have to find a way to meet in the middle, which is the fun part.

What’s your favorite part of a book to write?
I really love the slow build of sexual tension before the first kiss. Those moments are so full of angst in real life, that it’s a blast to try and translate that to two fictional characters. I like to make them suffer a little (insert evil laugh here).

Oh man. Well, that’s just kinda mean. Tell me about one your favorite scenes from the book, and why is it a favorite?
I can’t say specifically without giving it away because it’s toward the end, but it’s a scene where Luke and Mary finally realize they’re in love with each other, but there’s a lot on the line for both of them. It’s a moment where they have to decide what’s more important- protecting themselves, or opening themselves up to the possibility of true joy.

That does sound good. Can you tell me a fun fact or two about Luke’s Gift?
I wrote this book after watching about 200 Hallmark Christmas movies in a row (slight exaggeration. Maybe it was closer to 189). I saw it unfolding like a movie in my head, and Luke and Mary were in the starring rolls. So I hope that comes across on the page. I’d love my readers to feel like they’re stepping inside a Hallmark movie for a while!

You definitely have me wanting to read this book. What’s your favorite way to spend Christmas?
My family is pretty traditional- we spend a LOT of time during the holidays in our pajamas watching Christmas movies, baking cookies, going for drives to see the lights, and dressing our animals up in Christmas sweaters, because that’s the law.

Lol. I’m going to have to try to dress my cat up this Christmas. I’m sure he’s NOT going to like it. What’s next for you?
I actually just got edits for the last book in my Harlow Brothers series, Judd’s Vow. This one comes out right after the new year, and I’m so excited to introduce everyone to this sexy oldest brother. (Hint: Judd’s a pilot and he’s also gorgeous, and does things like carry you off to bed.)

The Harlow men sound amazing. Kaylie, thank you for answering some questions for me. I’m looking forward to reading both of Tanner and Luke’s stories.
Thank you SO much for having me, and happy early holidays!

Mary must’ve been staring because Leon elbowed her in the ribs.

“He asked your name,” he said.

The tall police officer with the hazel eyes and sandy-blond hair bent his head and scratched something in his notebook. “And you’re the one who called it in?”

“I am, Officer,” Leon said. “I called when she started getting belligerent.”

“And by belligerent, you mean…”

“She refused to leave,” Mary answered. “Called us a few names, that kind of thing.”

The officer glanced up. He was so good-looking, it was almost ridiculous. Everything from his tanned, corded forearms to his sun-kissed hair, practically screamed surfer. The expression on his face was serious, though. His eyes were kind but guarded, and she guessed he’d probably been on enough of these calls to get fairly sick of them.

Her belly did a weird flip-flop thing when his gaze settled on hers.

“I’m sorry about that, ma’am. We’ll try and get this sorted out quickly so you folks can get back to work.”

Mary didn’t think she’d ever been called ma’am before. But decided she liked it. A lot.

He looked at her a second longer, then smiled. Dear Lord. The man had dimples that cut deep into each cheek. He was clean shaven, but there was a shadow on his jaw that promised a great beard if he skipped shaving for a day or two.

She let her gaze drop to his black, glossy jacket where a gold badge glinted underneath the fluorescent lights of the office. Then looked at his matching nametag, which read Officer L. Harlow.

Leon glanced over, and she realized he’d said something.

“I said, I can take it from here if you want. Since you’re on deadline?”

Crap. She’d almost forgotten. She was working on an article about a bond measure that had passed. Not nearly as exciting as staring at Officer Hottie all morning long. This wasn’t like her. She’d grown up around cops. She’d never been as swayed by the sexy authority thing as her friends. But this guy… This guy was different. There was something about him, or maybe about the way he looked at her, that was different. Could be just her libido talking, but she didn’t think so.

“Sorry. I just recognize your name, but I’m not sure from where.”

He clicked his pen and tucked it back in his chest pocket. “I’ve been gone a while, but I grew up here. Maybe that’s it.”

“Do you have family in Marietta?”

She really needed to shut it. But she had a reporter’s brain, and those tended to be inconveniently nosey.

“I do. A brother and a younger sister.”

He obviously wasn’t going to volunteer names, so she bit her tongue, forcing herself to show some restraint. But he nagged at her just the same.

“Okay, well…thanks for coming by, Officer,” she said lamely.

“No problem. I’m sure Mrs. Franklin’s cooled off by now. You’ll probably get an apology tomorrow.”

Mary didn’t think so. She’d seen the way Betsy Franklin had looked ten minutes before, like she wanted to rip Mary’s blouse off and strangle her with it. But it was a nice thought.

She gazed up at him. She had no idea how old he was, but judging from the sexy crinkles radiating from the corners of his eyes, she guessed he was older than her. Old enough that she felt like she was in high school again, lusting after one of her brother’s friends on the wrestling team.

“Okay,” she said. “Thank you. And merry Christmas, Officer.”

“Merry Christmas to you, too.”

And there were those dimples again. 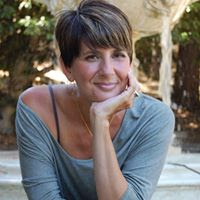 Kaylie Newell was born in the great state of Oregon, where she was raised alongside rivers and lakes and scruffy dogs that chased their tennis balls as far as Kaylie’s noodle arms could throw. As she grew, so did her imagination, and it didn’t take long to realize she was a romantic at heart. She began to fancy herself the future wife of a cowboy, the likes of which graced every paperback novel she could get her hands on. She decided to go to college in Oklahoma to snag herself one, but irony won over when she fell in love with a hippie in sheep’s clothing instead. Together, they came back to Oregon, started a family and watched their dreams unfold. Kaylie wrote her first book when her girls were toddlers, editing sex scenes with The Wiggles on in the background. She’s proud of many things in life, among them the fact that she can still recite her lines from Romeo and Juliet from her seventh grade play, the fact that she can set a grilled cheese sandwich on fire faster than most people can make one, but mostly she’s proud of the stories blossoming inside her noggin on a daily basis.