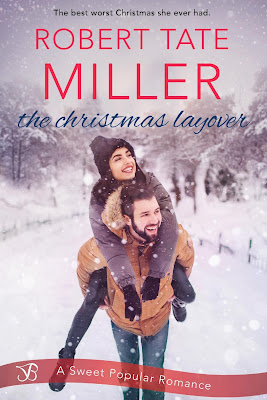 The best worst Christmas she ever had.The weather forecasters said the snowstorm would miss the eastern seaboard. They were wrong. When Ally Henderson’s flight from Southern California to finally marry her fiancé in New York City on Christmas gets diverted to the tiny Midwestern town of Bethlehem, she’s desperate to get back in the air and to the Big Apple. But with all the airports closed, she’s forced to rely on Midwestern hospitality to wait out the storm.

Living with a welcoming stranger is one way to spend a snowed-in Christmas, but when she meets the local diner owner, the kindhearted and surprisingly sexy Jake, sparks fly. Only, Ally’s a big-city girl with big-city dreams, and Jake will always be a Bethlehem boy.

The Christmas Layover marks my first time reading Robert Tate Miller. In another writing life, Robert was a screenwriter for several Hallmark movies. Thus, I had really high expectations for The Christmas Layover. Sadly, the book didn’t meet those expectations. That isn’t to say the story wasn’t enjoyable and good, because it was. It just didn’t wow and move me like I wanted.

It’s December 20th and Ally Henderson is flying from LA to New York for her Christmas wedding. Everything is going according to plan and she’s looking forward to marrying her fiance Tim, and continuing to run their yoga studio together. Things hit a bump when a winter storm takes a turn, becomes a blizzard, and closes down air travel across the Eastern Seaboard. Blizzard Blast as it’s called, forces Flight 1225 and its 285 passengers and crew to be diverted to small town Bethlehem, Colorado. With so many visitors in town all at once and the only hotel in town closed for renovations, it’s up to the residents of Bethlehem to make the new visitors welcomed for the night.

Jake Nelson is still reeling from Christmases of the past. Christmas use to be his favorite time of year. But four years ago, things changed for him. Just when he was finding happiness again, fate stepped in to turn his world upside down yet again. Since then, Jake has just existed and not truly embraced life.

Ally and very pregnant fellow passenger, Noel are housed with Jake’s mom Peggy. One night becomes four as the storm continues and the community embraces their new friends. In the midst of having a mini-crisis about the weather and her diverted flight, Ally’s world actually turns on its axis. While 1,000 miles away, with no way of getting back to LA, Ally learns Tim doesn’t plan on marrying her. In fact, he has stopped paying any and all bills related to their business and wiped out all of their joint accounts.

“New beginnings are often disguised as painful endings.” In The Christmas Layover, Ally and Jake learn that while life can be cruel, miracles at Christmas do happen. “Love is the greatest Christmas gift of all.”, and this Christmas Ally and Jake will find that all their past hurts have lead them to where they are meant to be.

The Christmas Layover is a sweet romance, full of wonderful and likeable characters. I will admit that there were times when Ally was slightly unlikeable as she was being ungrateful and rude. But I did understand where she was coming from. My heart broke when I learned of Jake’s story. But I swear that he is such a nice, likeable guy. There is this secondary love story that is sweet and amazing. I will definitely read more from Robert Tate Miller in the future.

Robert Tate Miller was raised in the North Carolina mountain town of Hendersonville and began writing at an early age. He began his writing career with homespun essays of small town life that were published in such publications as Reader's Digest, The Christian Science Monitor and the Chicken Soup for the Soul book series. He moved to Los Angeles in the late 1980s and wrote hugely successful family-oriented telefilms for NBC, ABC Family and the Hallmark Channel. Robert lives in Northridge, California.