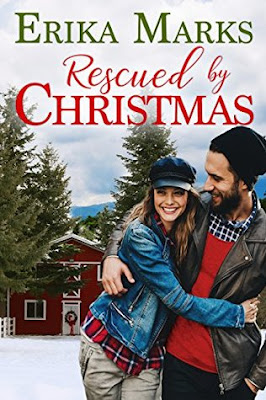 All pop star Jackson Wilder wants this Christmas is a few weeks out of the spotlight in a rented cabin in the Colorado mountains. But when a blizzard leaves him stranded on a country road on his way out of town—and still wearing the Santa costume from a last-minute commercial shoot—he takes shelter in a nearby horse barn to wait out the storm.

Miranda O’Keefe will be lucky to get a wreath upon her door this year. Between raising her six year-old son, Ollie, running her vet practice, and getting her horse rescue project off the ground—Christmas will have to take a back seat. But when Ollie tells Miranda he’s found Santa Claus asleep in their horse barn—and has asked Santa to heal his beloved rescue horse Twisty—the self-reliant single mother finds herself asking for a stranger’s help to grant her son’s Christmas wish.

But when attraction turns to affection, will love come to the rescue this holiday for Miranda and Jackson too?

Rescued by Christmas marks my first time reading Erika Marks. If all of her stories are as sweet and heartwarming as this one is, then she has a new fan. The cover is what captured my attention. The blurb is what had me wanting to read the book. I mean who can resist a stranded Christmas story, with a six-year-old believing in Santa Claus? Definitely not me.

Jackson Wilder is a popular country music singer. He never seems to have time for himself, and people know him wherever he goes. It’s three weeks before Christmas and he’s looking forward to being off grid in a mountain hideaway. Jackson is so excited that once he finishes filming his commercial, where he’s dressed as Santa Claus, he hightails it straight to his car. How hard can it be for a California native use to driving on the sand to drive in a snowy blizzard? The answer is very hard. Jackson crashes and injures himself but manages to find shelter in a barn before passing out.

With school closed due to the unexpected blizzard, six-year-old Oliver “Ollie” O’Keefe finds himself running to the barn to check on his mom’s newest rescue horse, Twisty. Not only does he find Twisty still looking sad, depressed, and dispirited, he finds Santa injured and unconscious. Making a Christmas wish that Santa saves Twisty, Ollie runs off to get band-aids and runs into his mother.

Being trapped in a blizzard is bad enough. But being trapped with a complete stranger when help is hours away is horrible. But Miranda is a vet and knows this stranger needs help. In a moment of weakness, Miranda finds herself asking Jackson to continue pretending to be Santa for Ollie’s sake. To her surprise, Jackson agrees. In a matter of days, these complete strangers create the foundation for a truly happy home and loving family.

Erika has written a really likeable and enjoyable story. All the characters were amazing. I literally smiled the whole time I was reading Rescued by Christmas. This was a sweet romance that had me wishing Christmas was around the corner. My only complaint about the story is that I would have really really liked to have seen what Christmas morning was like and more of Ollie.

You can read my Rescued by Christmas interview with Erika Marks here.

Erika Marks is a women’s fiction writer and the author of Little Gale Gumbo, The Mermaid Collector, The Guest House and It Comes In Waves (July, 2014). On the long and winding road to becoming published, she worked many different jobs, including carpenter, cake decorator, art director, and illustrator. But if pressed, she might say it was her brief tenure with a match-making service in Los Angeles after college that set her on the path to writing love stories (not that there isn’t romance in frosting or power tools!) A native New Englander, she now makes her home in Charlotte, NC, with her husband, a native New Orleanian who has taught her to make a wicked gumbo, and their two little mermaids.