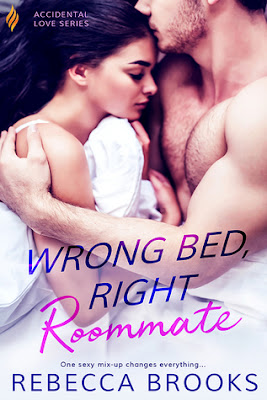 One sexy mix-up changes everything...


It's not every day you wake up to a stranger getting into your bed.
Only, he isn't a stranger at all, he's my best friend's hot older brother…and apparently my new roommate.
Having him in my space, driving me crazy, isn't a problem at all. Nope.
All I need to do is keep control of the situation…
But that's easier said than done.

Shawn Lassiter is the kind of distraction I don't need.
First he accidentally gets into my bed, half-naked, the night before my first day at my new job.
Hello, muscles and tattoos!
Then he's there, in nothing but a towel, making me coffee in the morning.
It's more than any girl can resist. Right?
But Shawn is off-limits, even if his eyes are saying differently.

Best friend/sibling is one of my favorite tropes. Rebecca Brooks and Wrong Bed, Right Roommate did not disappoint.

I love the premise of this story... It’s the middle of the night. Shawn Lassiter has just worked out a deal to sublease his sister's room while she's chasing her dreams in Europe. He arrives and assumes the slightly opened bedroom door is his room for the next two months. He gets undressed, gets in bed and is startled by the scream of Jessie Santana, his sister Talia’s best friend since childhood. Perfect. Set up. Shawn has walked into the wrong bedroom, but the right woman to help him become the man he wants to be.

From the beginning, Wrong Bed, Right Roommate had my attention. Jessie and Shawn were so easy to relate to, become invested in, and love. I wanted them to be together from the very beginning. Both are finally on a path toward their dream jobs. Jessie is an editorial assistant for a big publisher. Shawn is an assistant at an up and coming brewery, and out to prove that he can do the job and deserves it.

Jessie and Shawn both know they should stay away from each other. They don't have a romantic past with each other. But they both know the damage Shawn caused in high school, when he slept with two of Talia and Jessie’s friends. But a growing friendly roommate relationship quickly becomes more. Shawn and Jessie know they have to keep their summer fling from Talia a secret, and know this puts an expiration date on their relationship. The question becomes what are Jessie and Shawn willing to risk for a once-in-a-lifetime chance at love.

I loved everything about Wrong Bed, Right Roommate. As I said, Shawn and Jessie were great characters. In the end, Talia was very surprising. I was also surprised to find parts of the story to be heartbreaking. Shawn and Jessie have layers that I'm not sure they even know they have. They compliment each other in every way. I love that this was a romance, but that the story also focused on the friendship between Jessie and Talia. I can't wait to see what else Rebecca has in store for her Accidental Love series.