Review ~ THE SOCCER PLAYER AND THE SINGLE MOM by Kyra Jacobs 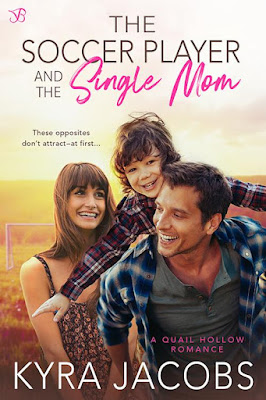 For most women, working for a sexy soccer star would be a dream come true. All except single mom Felicity Shaw. She has no interest in playing personal assistant for a stubborn, injured playboy—no matter how nice his abs are. But with bills piling up and mouths to feed, she can’t say no to the job.

That’s when it gets interesting.

The last thing Scott Gillie wants or needs is a persistent and entirely too distracting PA while he’s recuperating in his small hometown. Unfortunately, it’s not up to him. Then Felicity and her son end up temporarily moving in—all thanks to his meddlesome grandmother. Now temptation is right across the hall and it’s driving Scott crazy.

His only option is to fight fire with fire.

He never expects Felicity to do the same.

Felicity Shaw has pretty much struggled her entire adult life. Since her husband died of an overdose, it has just been her and her six-year-old son Tyler. Felicity lives for her son. With the exception of her cousin Lauren and Lauren’s family, it’s just the two of them. That's not to say Felicity doesn't have parents. She does. They're just not in the picture (their choice) and seem to not care about her or Tyler. While at her son's pediatrician's office, she discovers via a breaking news story that the factory she works at has been closed down. When one door closes, another one opens.

Felicity's open door is being held for her by J.B., the agent for Scott Gillie, pride of Quail Hollow, Indiana, and right-wing for Columbus's major league soccer team. An on-field injury has Scott seeking a second opinion from his friend and former college teammate Evan Bedi. Yes. Evan Bedi of Quail Hollow Pediatrics. Scott hopes that Evan will fast-track his return to soccer before his backup takes his starting position. Unfortunately, Scott's injury is worse than previously thought and Scott is looking at an additional two weeks of recovery time. Since Scott is staying in town with his grandmother, J.B. suggests and hires Felicity to be Scott's PA. Felicity’s job is to do some admin work for J.B. But mostly, she is to schedule appearances around the area for Scott, take him to those appearances, and ferry him around wherever he needs to go.

Scott isn't happy his agent hired Felicity. He doesn't think he needs an assistant and really doesn't want to do any PR work. Needless to say, shenanigans ensue when they each try to push their own agendas. Soon they become attracted to each other and decide to give into their feelings. But all too soon, they each start to wish their temporary fling could be more.

I really enjoyed the push and pull between Felicity and Scott in the beginning. This went on through almost half of the book. Them trying to get back at each other was fun to watch. For me, the tone of the book changed once the laughter stopped. Once they accepted and acknowledged they were attracted to each other, their scars started to show. Since the death of his mother, Scott has used soccer as a crutch. And the promise to his mother, has fueled his tunnel vision desire to be the best and reach the top of his sport. He has cast aside everything in his life for soccer. Felicity is funny. She’s strong, resilient, and resourceful. She carries around the burden of her husband’s death.

I think Kyra did a really, really good job of capturing the soul and essence of a six-year-old little boy. Edna, Scott’s grandmother, was the best kind of grandma. She knows more than she lets on. She's wise. She's funny. She's a handful. I love grand gestures. I found the grand gesture in this story to not be very grand. It was predictable and simple.

Now, I’m stepping on my soapbox to complain about social issues in the book not addressed with ways to seek help. Drug overdose is a huge issue, as is domestic violence. There are no warnings that these are included in the story. There are also no messages on referral links or numbers to seek help, in case you or someone you know needs it. I’m a firm believer that if you put it in the book as a way to drive your story, you owe it to readers, yourself as an author, and publisher to deliver a public service announcement. You never know what little push someone needs to reach out for help.


You can read an excerpt of The Soccer Player and the Single Mom here.

Kyra Jacobs is an extroverted introvert who has always called Indiana home. That means she’s well versed in fickle weather, pork tenderloin patties that don’t fit on a bun, and sarcasm. Putting her Indiana University degrees in Public Management to good use by day means Kyra does the bulk of her writing late into the night. Fueled by caffeine and funny memes, she weaves tales of love and relationships, including the humor and/or chaos both can bring. Kyra’s published novels range from sweet contemporary romance to chick lit and paranormal/fantasy.

When this Hoosier native isn’t at a keyboard, daydreaming through her fingertips, she’s likely outside, elbow-deep in snapdragons or on a sideline somewhere cheering (loudly) for her sporty sons. Kyra also loves to go bowling, tries to golf, and is an avid college football fan.