Review ~ A VIRGIN TO REDEEM THE BILLIONAIRE by Dani Collins 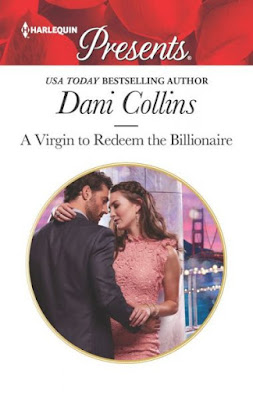 He'll make her pay...until he learns of her innocence!

Self-made billionaire Kaine Michaels has just given Gisella Drummond, daughter of one of New York's most influential dynasties, a shocking ultimatum: use her spotless reputation to save his own or he'll ruin her family for betraying him! Kaine knows Gisella wants him, and he knows how much pleasure he can give her! But uncovering sweet Gisella's virginity makes Kaine want her for more than revenge...

In the past, if you were to ask me if I'd liked the Harlequin Presents line I would have said no. I'm not drawn to billionaires who look down on the “little people” or exotic locales. I despise the book titles. The US book covers are boring and don't require a second look. However, I love the UK covers. I need stories with characters I can relate to. Characters I can feel for and root for.

I came across an excerpt of a Christmas romance from Dani Collins. I HAD to read the book. Turns out I loved the book. When I saw Dani had another book coming out, I again did the full body shutter because of the title. Yes, the title of A Virgin to Redeem the Billionaire does fit the book. But I hate it. Once again I went looking for an excerpt. I found one, showing the hero and heroine meeting for the first time. And once again, I was sold.

Gisella Barsi Drummond is the granddaughter of one of the most respected families in New York City. The family owns and operates Barsi on Fifth, a jewelry store. The family also deals in the mining of precious gems. Since Gisella and her cousin Rozi were children, they heard about the romantic tale of their grandmother, Eszti, falling in love and ultimately coming to America. The tale centered around a pair of earrings that were sold separately, first for Eszti to come to America and then to open the jewelry store. When one of the earrings shows up at an estate sale, the two know they must acquire it. No matter the cost.

Kaine Michaels is a self-made billionaire. He owns Riesgo Ventures, a tech company in San Francisco. Kaine is a man who never knew love. His mother died when he was young and he never knew his father. Kaine has never met the only family he knows about. However, they did contact him when he became rich. As a child, Kaine grew up in foster care, but most of his time was spent in juvie. He's smart and has an eye for investing. In a move to diversify his portfolio, Kaine convinces several other investors to go into the mining of precious gems with him. At Kaine’s guidance, they invest in Benny Barsi’s company. Unfortunately, Benny seems to be misguiding his investors and avoiding Kaine, leaving him to fend-off questions. Kaine didn't become a billionaire by being a pushover. With the possibility of losing the good name he's worked hard for and a significant amount of his money, Kaine goes after one of the earrings as a way to get the family's attention.

Kaine and Gisella's meeting was pure accident. But that doesn't mean that he isn't going to take advantage of the situation. Kaine forces Gisella to play the role of his latest love interest in public. As the two spend time together, the attraction they have that has been simmering just under the surface boils over. Their attraction and feelings for each other are real. However, their backgrounds refuse to allow them to believe that the other truly wholeheartedly feels the same.

I love that Dani draws me in with characters who on the surface have the perfect lives. They seem to be rich, live in nice houses, and have childhoods that dreams are made of. But looks are deceiving. Dani's characters aren't perfect. They’re flawed, broken, but are strong. They hide scars, if not physically but emotionally. She writes characters I shouldn’t like but she manages to make them human. She makes them likeable and in their own way endearing.

I really liked that we’re given a glimpse of the next hero and heroine, Viktor Rohan and Rozi Toth. I’m excited that there’s also going to be a story on Benny Barsi. I can’t wait to see what Dani has in store for the next installment of the Barsi on Fifth Duet series.

The Barsi on Fifth Duet Series: