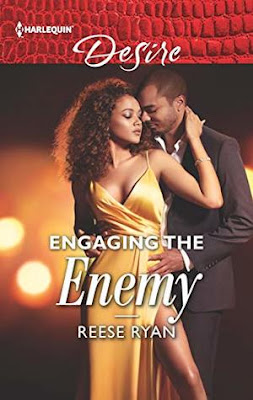 How far will an ambitious heir go to secure his future?

Parker Abbott will do whatever it takes to be the next CEO of King’s Finest Distillery, even play fake fiancé to his childhood nemesis, Kayleigh Jemison. Yet as he and the fiery redhead get reacquainted, sparks fly and real passion emerges. But when her ex wants a second chance, who will Kayleigh choose?

Reese Ryan’s Bourbon Brothers series centers around an African-American family who builds and runs a bourbon distillery in Magnolia Lake, Tennessee. Engaging the Enemy is the third book in the series and is a standalone read.

Engaging the Enemy is a friends to enemies to lovers story over twenty years in the making. Kayleigh Jemison and Parker Abbott despite being from different socioeconomic classes were best friends as kids. This all changed when they were in middle school and Kayleigh heard Parker laughing about her and her family. Since then, the two have been at odds.

Parker is the second oldest child of Duke and Iris Abbott. As CFO of King’s Finest, he is an uptight workaholic who loves his family, but silently at times has doubts about where he fits in. He's a little of a nerd, and has an addiction to expensive watches. When Duke inform his kids what he wants to do for his and Iris’s anniversary, Parker views this as an opportunity to show his father that he has what it takes to be the next CEO of King’s Finest Distillery. In Parker's mind, all he has to do is make his nemesis an offer on her downtown building she can't refuse.

After having her heart broken seven years ago, Kayleigh retreats to Magnolia Lake and purchases a two-story building that houses her small jewelry and consignment shop. Kayleigh is a jewelry designer who makes unique one-of-a-kind pieces. She doesn't make a lot of money, but she's comfortable. Her slow work day gets interesting and bizarre when Parker shows up making her an offer to buy her building. Out of sheer stubbornness, she declines. But a phone call from her ex’s sister has her reconsidering. Kira Brennan is getting married and she wants Kayleigh to be a part of the wedding. The wedding is scheduled to take place on a Caribbean island and with all the events planned it will last a week. Kayleigh just needs a plus one. With this new development, Kayleigh comes to terms with Parker on the sell, but she also adds in the stipulation that he has to accompany her to the island wedding and pretend to be her fiancé.

Kayleigh’s best friend Savannah, who is also Parker's sister-in-law, gets involved and decides the two should spend the next ten weeks going on dates and getting to know each other again. In order for people to believe this fake engagement is real, these two need to know each other and act like they are in love. What starts out as a chore for the two becomes something they each look forward to.

I love the sweetness Kayleigh brings out in Parker. He doesn’t show that side of himself to anyone. I like that she challenges the very orderly and structured life Parker has setup for himself. She keeps him on his toes. I expected Kayleigh to give Parker a really hard time. But she didn’t. I was surprised by her vulnerability. I was equally surprised by the depth of Parker. He was truly not what I was expecting.

The Bourbon Brothers and the Abbott clan could potentially become my favorite family dynasty.