Review ~ THE TROUBLE WITH COWBOYS by Victoria James 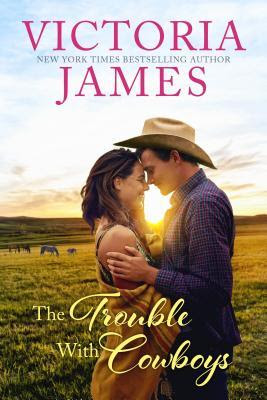 From New York Times bestseller Victoria James comes a poignant and heartfelt romance that wraps you in a warm embrace...

Eight years ago, Tyler Donnelly left Wishing River, Montana, after a terrible fight with his father and swore he’d never return. But when his father has a stroke, guilt and duty drive him home, and nothing is as he remembers––from the run-down ranch to Lainey Sullivan, who is all grown up now. And darn if he can’t seem to stay away.

Lainey’s late grandma left her two things: the family diner and a deep-seated mistrust of cowboys. So when Tyler quietly rides back into town looking better than hot apple pie, she knows she’s in trouble. But she owes his dad everything, and she’s determined to show Ty what it means to be part of a small town...and part of a family.

Lainey’s courage pushes Ty to want to make Wishing River into a home again—together. But one of them is harboring a secret that could change everything.

There's a reason Victoria James is one of my favorite authors. She writes heartfelt stories that tug at your heartstrings, with characters you wish were real. The Trouble with Cowboys is a small-town romance, set in the town of Wishing River, Montana. In the town of a thousand people, everyone seems to know everyone and their business.

Eight years ago, after the death of his mother and a huge argument with his father, Tyler “Ty” Donnelly packed his things and left in the middle of the night. He didn't say goodbye to his friends or anyone. His pain was so palpable he just knew he had to get away. He had no clue where he was going or what he would do to survive. A phone call from his former best friend now doctor, Dean Stanton, informing him of his father’s stroke brings him back to town.

Lainey Sullivan hasn't had an easy life. She was abandoned by her mother and raised by her grandmother. It was just the two of them, until her grandmother passed away. Grandma Tilly left Lainey two things, Tilly’s Diner and a piece of advice, “never trust a cowboy”. For the past five years, Lainey has been faithfully running the diner. But she finds herself stuck and feels as if she's wasting away. At twenty-six, Lainey has always dreamed of being an artist. She even got accepted to a prestigious art school in Italy. But something would always happen to force her to change her plans. Now Lainey is stuck running the diner out of loyalty, duty, and obligation.

When Ty shows up at the diner, all heads turn to stare at him. No one asks how he’s been or welcomes him back. Even Lainey is cold and rude to him. But she sees something in his eyes. Something she recognizes in herself. Over the years, Lainey and Ty's father, Martin, have grown quite close. She views him as the father she never had. Since his stroke, every night Lainey drives an hour to take Martin his dinner, feed him, and spend time talking with him. Lainey refuses to stop her routine just because Ty seems to be uncomfortable with it. In quick order, Lainey and Ty form a friendship which leads to a growing attraction. However, each is hiding a secret that could jeopardize any future together.

The Trouble with Cowboys was a really nice read. I love the main characters of Ty and Lainey. They were truly what the other needed. The secondary characters of Hope, Lainey’s best friend, and Dean and Cade, Ty’s best friends were equally as good. They all have their stories and untold secrets. Hopefully, this is a start of a new series.