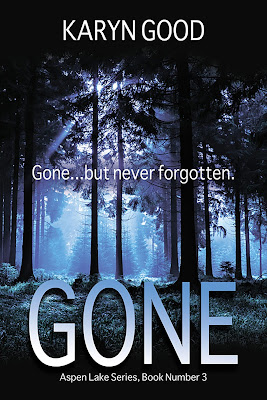 Ever since a devastating family tragedy seventeen years ago, Grace Bighill has struggled to keep her remaining family from falling apart. Then the discovery of her mother's body in the woods unearths a connection to a decades old murder case, and Grace is dragged into a politician's bitter bid for revenge.

Constable Mike Davenport's days in Aspen Lake are numbered. He's ready to take his next step up the career ladder somewhere a lot more cosmopolitan. He's avoided any emotional attachments, despite having fallen hard for a certain stubborn local. But when a body turns up, Mike's careful intentions collapse in the face of Grace's grief and her exhaustive efforts to care for her family.

A search for answers leads Grace and Mike down a twisted path proving no one can escape their roots. But someone might die trying.

Leaving Chase to deal with Mason, Mike braced a hand on Scott’s chest and pushed him back. “Knock it off.”

He wasn’t a big fan of Walker’s. He didn't like how Walker watched Grace, relied on her, how she laughed at his jokes, or dropped everything to help him out. It was a pleasure to manhandle him to an empty corner of the room.

"Every person here will tell you that asshole started it." Blood leaked from Scott’s split lip and his Walker’s Plumbing and Electric shirt was missing a pocket.

Mike swiped a napkin from one of the few remaining upright tables and offered it to Scott. “So, he attacked you first?”

“Not exactly.” Walker snatched it and dabbed at his bloody lip.

Mike raised his brow and waited.

Scott’s snort and sneer combination left little doubt as to his opinion of having to spell things out for Mike’s benefit. “He verbally attacked Grace, and then he hit her.”

To hide his less-than-objective reaction to the thought of someone assaulting Grace, Mike pulled out his notebook and gave his wad of gum a workout while he recorded the details of Scott’s side of things. Walker might be a little too fond of Grace, but he was as honest as they came. He believed Walker’s story. He might even have felt a drop of gratitude for his defense of Grace.

Somewhat mollified by Mike’s no nonsense approach, Walker settled down. "I need to leave. Go pick up my kid."

If Walker had one thing going for him, it was his parenting skills. He tried hard to do the right thing for his child. Mike did a quick survey of the room. “A lot of damage done here tonight.”

Scott crumpled the soiled napkin into a ball and shoved it in a pocket. Guilt roughened the man’s voice. “I’ll talk to Wayne tomorrow. We’ll work it out.”

Mike didn’t doubt he would. Walker was a believer in an unwritten small town code of ethics Mike would never understand. “See that you do.”

Walker wasn’t a fan of taking orders, especially from Mike. “I’ll just go collect Grace, and we’ll be out of your hair.”

Mike was only too happy to enlighten him to the contrary. “Grace is my business tonight.”

“You might want to check with Grace over that one.” Scott offered a smirk. “Constable.”

Mike planted his hands on his hips and purposefully took up more than his share of space. “I’m not required to check-in with anyone.”

Karyn Good grew up on the Canadian prairies and she's still there loving every minute. She writes romantic suspense featuring strong heroines and the men who love them. In the pages of her books you'll find danger, passion, and a winding path of twists and turns that lead to forever.