Interview, Excerpt & Giveaway ~ THAT GUY AND THAT GIRL by Natalia Albrite 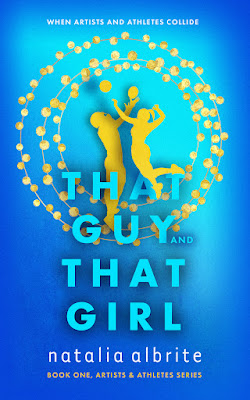 Olivia Meadows is excited to finish her senior year of college as a volleyball national champion beside her teammates and best friends. A complication arrives in the form of John Hunter, that guy, her brother’s best friend whom she has had a secret crush on since she was eleven years old. Effortlessly charming and handsome, with a body honed by years of playing football, John initiates his charm offensive and Olivia finds herself unable to resist him.

John Hunter is pumped to finish his senior year of college as a football national champion beside his teammate and best friend. The only thing missing is that girl, Olivia Meadows, his best friend’s little sister. He needed to sow some wild oats before settling down with Olivia but now he is ready for something serious with the girl he has always admired.

Be careful what you wish for. John and Olivia find themselves dealing with adult consequences very quickly and wondering if their young love can endure the pressures of adulthood. Will they find deeper love or implode from the pressures of their own making?

Hi. Natalie. Welcome to Read Your Writes Book Reviews. Congratulations on being a published author! That Guy and That Girl sounds like a really good story. Plus, I LOVE best friend/sibling romances. Tell me about the book and what readers can expect from it.
Helloooo! Thank you! Being a published author is one of those things that I really never thought I’d do and it feels amazing--one of those secret dreams come true. That Guy and That Girl is a story set in the crucial senior year of college which for me, was a really confusing time because it’s the cusp of adulthood. For John, he’s pretty sure he knows exactly what ought to come next and has a fully visualized future. Olivia's vision is not as fully planned so she's really focus on enjoying the present so she can avoid thoughts of life after college. Their new relationship, which in many ways was inevitable, put them both on new paths and they each handle it differently. Sometimes they come together and sometimes they’re drawn apart by the pressures. It's a journey for sure and hopefully an enjoyable one by the end.

Tell me about the characters of Olivia Meadows and John Hunter, and what is it you like/love about them.
Olivia is a lot like me (how did that happen? 😉😉) when I was 22. She feels ambivalent about the future. She's smart and overall she's reserved but she comes out of her shell around people she's comfortable with. She definitely struggles to advocate for herself and has to find her voice as life presents challenges for her. John is confident (sometimes cocky) and really has every reason to be. He's an elite athlete and many things have come easily to him. When faced with challenges in his relationship with Olivia, he has to reprioritize what matters to him and he rises to the challenge. I love them both so much! They're flawed but they're really trying their hardest.

Generally, books tend to surprise authors in some way. What surprised you about this story?
This is sooo true! I think what surprised me is that as a woman, I'm very in touch with a struggles that Olivia faced but I’d never written from a man's point-of-view before. It's not difficult for me think men have it so easy and it was really amazing to see life through John's eyes and realize he has struggles too. Part of John’s struggle (and I think men in general) is feeling like he's allowed to even voice his own feelings. I like that John is a dude in so many ways but he's also very loving and sensitive.

Can you tell me a couple of fun facts about That Guy and That Girl?
It takes place in 1992 because when I sit down to write a novel, I really began with a family tree and I meant to write a story about a guy named Gage. When I was drawing out that family tree, I found myself intrigued by his parents--Olivia and John. So I didn't really intend to write a book set in the 90s but I felt drawn to explore Gage’s parents. Everything I planned next stems from John and Olivia’s story but that's NOT where this began. Also, I didn't expect to become attached to the side characters as much as I have. They are huge part of my future plans and I never expected that.

Since Olivia and John needed their story to be told, do you still plan on writing a story for Gage?
Yes! Gage will get his own story but he’s now been bumped way down the road. I’m not sure about some of the original brainstorm but I do still really feel a sense of Gage’s story. He keeps sticking around in my head.

That Guy and That Girl is book one in the Artists & Athletes series. Since this was your first book, how do you see your writing changing for the next book?
I really want to master the novella so my next book will be a novella that is a prequel to this story which was also not a part of my original plan. My new plan (though things can change) is to go back and forth between novellas and novels. I hope that will allow me to publish more frequently and allow me to have some fun exploring side characters.

What's next for the series? You mentioned doing a prequel to this story and writing about the side characters.
Writing is such a surprising, often elusive process and here’s my new plan although I need to include a caveat that this is subject to change. Also, I have to confess this was NOT my original plan at all. I’ve just become intrigued by the side players and let them guide me.

Then, I plan to write the stories of the children who will be young adults or in genre speak “new adults” by the time I write those stories. I will admit that I had a solid idea of the number of children including brief descriptions before I started That Guy and That Girl but I don’t feel quite as sure anymore. We shall see… I’m honestly curious to see if I continue to be interested in the Meadows/Hunter families. I want to leave the door open a bit in case I feel like my interest and readers’ interest have run their course.

Natalie, thank you so much for answering some questions for me. I am definitely adding this book to my reading wishlist.
Thank you so much for having me! It was really fun to look at my process and work in a new way--thanks for the opportunity and insightful questions!

I spot Marcus in my dad’s hand-me-down Maxima with John in the front seat next to him. Oh jeez. John Hunter. He’s that guy. He’s the stuff of young girls’ dreams and I gave him up long ago by trying to turn my eyes to other guys. The way I see it, it’s like this: 1) he’s Marcus’s best friend and I have no interest in messing up their friendship; 2) he’s not an intentional player but he’s a player just the same; and 3) thank you, but I’ll skip the broken heart, please. I’ve grown up in proximity to this handsome devil for most of my life and he still manages to make my stomach drop when I see him.

It’s such a cliché to say that he’s tall, dark and handsome but clichés work for a reason—they’re inescapable kernels of truth. John is tall at a striking six feet and four inches. He’s dark with his almost-black hair and deep brown eyes. I can’t forget the handsome with his perfectly structured jaw line. Ridiculous. Just by looking at him, I can feel my adrenaline kicking in and the sweat gathering. Great.

I plaster an annoyed look on my face because that’s how we interact with each other. That’s part of our unwritten script. He plays the charming rogue and I play the cynical wallflower who is suspicious of all his kind gestures. He jumps out and does a half-bow. “Madame, your chariot,” he says as he gestures to the front seat.


Purchase That Guy and That Girl from:
Amazon | Goodreads 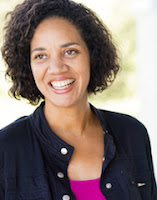 Natalia is a lifelong reader and lover of romance novels. Before finally tapping away at her keyboard to create her own stories, she tried all sorts of professions: elementary school teacher, barista, seller of make-up, baker, and the list goes on. When she isn't pursuing the arts, she's hanging out with her husband, two wacky children, and full-figured Corgi.

You can follow the That Guy and That Girl Blog Tour here.