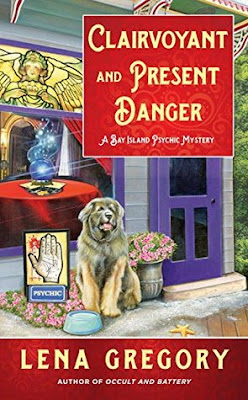 A haunting vision reveals a ghostly grave in the latest Bay Island Psychic Mystery from the author of Occult and Battery.

Whoever said that dead men tell no tales has never met Cass Donnovan...

Cass has always relied on her abilities to guide her, but after communications with a ghost land her in the middle of a murder investigation, she has to wonder if her gifts are really more a curse.

Cass knows she is meant to help track down the killer--much to the chagrin of local law enforcement--when the apparition leads her to a dead body on the beach near her psychic shop, Mystical Musings. But the police are not the only ones who wish Cass would stick to reading palms. Someone is trying to scare her off, and it will take all her powers of premonition to catch the killer before Cass herself becomes the next victim...

Asking for help, a ghost haunts Cass Donnovan in her sleep and visits her in her waking hours. Before too long, Cass discovers a body on the beach. A body she is lead to by the ghost. Cass knows she shouldn't get involved in the police investigation, but the ghost won’t allow her to sleep. Adding to her dilemma are the break-ins to her home and shop. With the help of her best friends Stephanie and Bee, Cass sets out to figure out who the ghost is, and what her connection to the body on the beach is. But the more Cass digs for the truth, the closer she becomes to being the killer’s next target.

Once again, Lena Gregory has written a good mystery. She had my mind going all over the place trying to solve the mystery before Cass did. I failed. In Clairvoyant and Present Danger the secrets have secrets, and some of those secrets are pretty good. I’m looking forward to seeing how the revelations of these secrets play out in the next book.

**Received a copy of the book courtesy of the publisher and voluntarily reviewed.**

You can read an excerpt of Clairvoyant and Present Danger here.