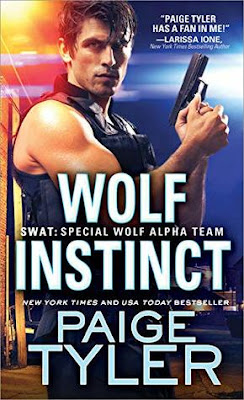 He’s a wolf shifter.
She hunts monsters.
How can she be The One for him?

SWAT werewolf Zane Kendrick will do whatever it takes to take down the man who attacked his pack. His search takes him to Los Angeles, but when he meets Alyssa, the smart, sexy agent who comes to his aid, he’s immediately interested in pursuing more than just the next lead. All his wolf instincts tell him that she’s The One.

FBI agent Alyssa Carson has investigated some weird stuff lately, and finding missing people drained of their blood definitely falls into that category. When following a clue leads her to Zane, she agrees to work with him and his team. She’s attracted to the gorgeous Brit, but she doesn’t have time for anything but finding answers.

When Zane and Alyssa discover the sinister truth, it’ll take everything they have to make it out of this mission with their lives—and hearts—intact.

Wolf Instinct is the ninth book in Paige Tyler’s SWAT: Special Wolf Alpha Team Series. It is a direct continuation of the series and I think you need to read all of the books to really understand what is going on. Plus, every book seems to add a little more to the Werewolf lore. Considering the amount of books there are in this series, I am impressed that Paige is able to keep things interesting when I would have thought that she would have ran out of new material. As with all of the other books, a member of the Dallas SWAT team meets the one and things go crazy from there.

In Wolf Instinct, SWAT member Zane Kendrick meets FBI agent Alyssa Carson and she is a lot more than Zane is prepared for. Zane and two of his teammates are in hot pursuit of the man who orchestrated the attack on his pack and is also responsible for Zane almost dying from being poisoned. They end up in Los Angeles, California where they not only meet Alyssa but also run into more werewolves as well as a few other surprises that I didn’t expect. For one, Alyssa’s division of the FBI is a lot more informed about creatures that go bump in the night than anyone would have known. Secondly, the pack finally finds out who sent the hunters after them in the first place. Again, this is a continuation from the previous books so if you don’t know what I’m talking about, I can’t help you. This world is very intricate and missing any detail will leave you lost. But that’s what I love about this series. You can really get lost in the drama and the action. It’s a great escape.

A lot that gets revealed in Wolf Instinct that really takes the series in an unexpected but fascinating direction. I can’t get into much true detail because that would ruin everything. I thoroughly enjoyed everything about this book. Zane and Alyssa were really good for each other and their love story was just as good as all of the others in the pack. Everything else that happened was really the icing on the cake. I look forward to the next book in the series.