Interview & Giveaway ~ OUT OF OPTIONS by Dianne Ascroft 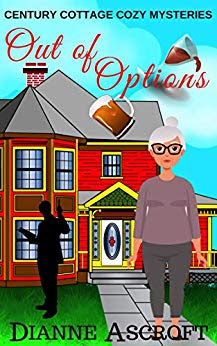 Out of Options is a prequel novella to the Century Cottage Cozy Mysteries series, and introduces Lois Stone and her companions, Raggs and Ribbons, a pair of perceptive calico cats.


A dry district, a shocking secret, a missing person. When Lois Stone’s friend, Beth Darrow, arranges to meet her to reveal an astonishing discovery, Lois’s curiosity is piqued. Then Beth doesn’t keep their lunch date and Lois becomes worried. What has happened to her friend?

Middle-aged widow Lois is settling into life on her own in her neighbourhood and in the library where she works, and she is just about coping with her fear of strangers after her husband was mugged and died in the park at the end of their street. But her quiet existence is rocked when her friend and fellow local historical society researcher, Beth, arranges to meet her to reveal an exciting and shocking discovery she has made about the history of prohibition in West Toronto Junction, the last dry area in Toronto, and then goes missing before she can share her secret with Lois. There isn’t any proof that Beth is missing so the police won’t actively search for her. Only Lois and Beth’s niece Amy are convinced that Beth’s disappearance is very out of character, and they are worried about her. Where has Beth gone? Is she in danger? And, if she is, who might want to harm her and why? Lois knows she must find the answers to these questions fast if she wants to help and protect her friend.

And so begins a weekend of skulking in the park, apple and cinnamon pancakes, familiar faces staring out of old newspapers, calico cats, shadows on the windowpane, and more than one person who might want Beth to disappear from the quiet, leafy streets of the historic and staunchly dry West Toronto Junction neighbourhood.

Hi Dianne. Welcome to Read Your Writes Book Reviews. How are you?
I’m fine, thanks, and delighted to be here. Thanks for inviting me to your blog, Kim.

You are very welcome. Please tell me about the Century Cottage series.
The Century Cottage Cozy Mysteries series features heartwarming stories set in a fictional small town in Canada. The main character, middle-aged widow Lois Stone, has moved from the big city and is trying to adjust to life on her own in an historical “century cottage” with her two calico cats. As she settles into her new life, her tranquility is often rocked by adventures and mysteries that she can’t ignore. Out of Options is a prequel novella that gives readers a glimpse into Lois’s life in Toronto before she moved to Fenwater, the fictional small town where the rest of the series is set.

What can you tell me about the main/secondary characters who readers will come to love in the series.
The series revolves around Lois Stone, the main character in the series, and she is definitely one of my favourite characters. The middle-aged librarian is someone who is quiet, dependable and trustworthy with firm standards. I wanted her to be believable rather than larger than life: someone readers will like. Her struggle with grief after the death of her husband, and her determination not to retreat from life, despite her shyness, are challenges that I think will resonate with many readers. Although she is quiet, she has a dry sense of humour and her caring towards others shines through her somewhat muted exterior.

Most of the characters that will be important to the series are introduced in A Timeless Celebration, the first novel in the series. But we do have a brief meeting with Lois’s best friend Marge toward the end of Out of Options. Marge is Lois’s opposite: confident and outgoing. The middle-aged divorcee has returned to Fenwater, her hometown, to keep an eye on her elderly mother but she hasn’t settled down to a quiet life. She’s a dyed blond social butterfly and everyone in town knows and likes her. She and Lois worked together at the local library in Toronto and they have been friends for years. Although she has moved out of Toronto, she still supports her friend and makes sure that Lois doesn’t retreat from life now that she is on her own. She’s Lois’s shoulder to cry on and rock to steady her in a crisis. She also ensures that Lois’s life is never dull.

How did you go about creating your characters? Did you have any inspirations?
In many ways, though not entirely, Lois Stone, the main character, is very like me. After years of doing detailed historical research for my previous historical fiction series, I decided that my first cozy mystery wouldn’t involve a huge amount of research. So as I created Lois, I deliberately used some of my own likes and dislikes to bring her to life. That made it very easy for me to make her believable, and since she has so much in common with me, we ‘hit it off’ and are great friends.

The rest of the characters in the series sort of popped out of my head to complement Lois and help to tell the stories. Some of their characteristics and quirks are inspired by real people but mostly they escaped from my imagination and are now running free to do whatever they please.

The series starts off in Toronto and moves to Fenwater. You mentioned that Fenwater is a fictional town. Is it based off a real town or city?
Yes, it is. One of the things that I think draws readers to a cozy mystery is a setting that appeals to them. It’s important that the place where the story is set beckons to readers to step in and stay a while. There’s some places that just linger in your mind. Something about the atmosphere of a particular location grips you. For me that spot is Fergus, Ontario, a small town one hundred kilometres northwest of Toronto. It captivated me almost forty years ago when I first visited it, and I returned there regularly for several years while my mother lived in the town a little over a decade ago. A couple summers ago I realised that it was the right place for my first cozy mystery novel. I wanted to create a warm, welcoming place that would be central to my stories and that readers would want to return to for the next book. So I fictionalised the small town that I knew. It became Fenwater and my series evolved from there.

What's your writing style like? Do you start out with an idea of how the person is going to die and then figure out who dies and why? Or do you just somehow let the story play out?
My cozy mysteries usually start with a quirky idea that pops into my head – and so far, no one has died. Are you surprised by that?

Yes. I am definitely surprised by that.
Well, there’s lots of other serious crimes besides murder that can be equally captivating. The ideas that spring into my head might be about how a crime could be committed or some other detail of the plot. I mull over any interesting ideas for a while until more details fit together and the plot gradually evolves.

I like to zero in close to my stories. I’m not interested in writing a larger than life blockbuster that includes a huge cast of characters and many flashy settings. I like to focus on a small place with characters that live relatively ordinary lives and give readers a glimpse of what their lives are like. I think that homespun aspect is vital to creating my stories. A story needs to be compelling, one that will matter to the characters and the reader. There must be a significant problem or conflict for them to solve, and events must drive relentlessly forward until the problem or conflict is resolved. But that can play out on a small stage and still capture the reader’s imagination. As well as portraying the underlying problem or conflict, the characters in the book need to touch readers’ hearts and make readers want to root for them. I try to make that happen.

Out of Options is a prequel to the series. Why did you decide to go back and write a prequel?
In A Timeless Celebration, the first book in the series, I made references to Lois’s life in Toronto before she moved to Fenwater, and to the events that occurred which made her decide to move to the small town. I had this backstory very firmly in my mind when I wrote the first book in the series so I decided to write a prequel to let readers see Lois’s life in Toronto and what happened to upend it, causing her to move to the town where the rest of the series is set.

What can you tell me about Out of Options?
Out of Options is a cozy mystery that steps back in time to more than three decades ago in West Toronto Junction, a unique district in Toronto that fiercely upheld prohibition in the area until the beginning of this century. Prohibition and its effect on the district was part of the fabric of the area for almost a century. I guess it goes back to my beginnings as a historical fiction author, but historical details like this fascinate me and I can’t help throwing historical elements into my stories. So in Out of Options, the story is set in a community divided over whether to continue to uphold their ‘dry’ status almost a century after the town voted to ban the sale of alcohol in the town. Although you might think that would be a non-issue toward the end of the twentieth century, it was anything but in this area and that was the basis for an interesting story.

Dianne, thank you for taking the time to answer some questions for me.
It was my pleasure, Kim. I hope your readers found the glimpse into Out of Options intriguing.

Dianne Ascroft is a Torontonian who has settled in rural Northern Ireland. She and her husband live on a small farm with an assortment of strong-willed animals.

She is currently writing the Century Cottage Cozy Mysteries series. Out of Options is a prequel to the series.

Dianne writes both fiction and non-fiction. Her articles and short stories have been printed in Canadian and Irish magazines and newspapers. When she’s not writing, she enjoys walks in the countryside, evenings in front of her open fireplace and folk and traditional music.

You can follow the Out of Options Blog Tour here.

a Rafflecopter giveaway
Follow
Posted by Kim at 3:26 AM