FEAR JUSTICE is on sale for $.99, during the tour. 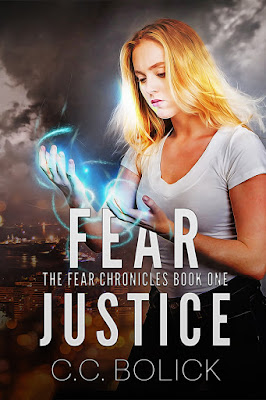 Seventeen-year-old Rena Mason counts the days until she can leave for college. Every night her father drinks himself to sleep, leaving her to care for her younger brother. When her father is kidnapped by terrorists, her dreams of freedom become a nightmare.

Stunned that her father has a history with these terrorists, Rena knows she must run or be their next victim. She learns the tough guy at school has a reason to look after her - he's working for a government agency with the same goal as the terrorists: find a woman who disappeared eighteen years ago. Time is running out since only this woman's special gift can save the world from a looming nuclear attack.

Rena can't trust anyone, especially not the stone-cold agent she's falling for. Can they save the world before Rena's feelings trap her in an agent's fight for justice?

Fear Justice contains elements of fantasy, sci-fi, and paranormal, with a clean romance. It's the first book in an exciting new series called The Fear Chronicles.

Balancing life with writing is an everyday battle, especially for the many writers who work a full-time job. You can’t stop living to write, although at times I admit to doing almost that.

Since publishing my first book in 2016, I’ve written a new book every four months. I usually take two months for plotting – those days are filled with brainstorming sessions while I complete all of my necessary daily activities. This ‘plotting’ time might include detailing my character map on my lunch break or making notes of important dialogue snippets and must-have actions. During this time, I focus on life (75%) and preparing for the upcoming book (25%). If I can get up early (before the kids) or stay up late (after they’re snoozing), I might get a few passages outlined.

Sticky notes are my best friends. If I don’t have one and I’ve got an idea that can’t wait, I use an envelope, a napkin, or my hand. The thought of letting one idea slip away sends my OCD into overdrive.

After two months of plotting, I spend the next month writing the text. At this point, it’s life (25%) and writing the book (75%). I write early, late, and at any time I can sneak in a few minutes during the day. If I feel up to writing a full chapter or two at one time, I might take a vacation day from work. It typically takes me about a week to get in a good rhythm.

Once I’ve found that magic feeling of my story rocking onward, I don’t stop until the book is done.

I never write a book from the first page to the last. I lay out my chapters in Scrivener, add a short description of each major scene, and then write what feels most interesting to me that day. My emotions dictate what I write.

After the text is complete, I send the story off to my editor and start planning the next. Some writers say they must write a small amount each day. Early on, I found that hard to accomplish with kids and a job. It seems less stressful on my family if I plan out the books and write in alternating sessions.

Family is important, so is religion and about a hundred other things including the job that pays the bills. Until I’m lucky enough to write full-time, which will probably be never, I must find a way to balance all of this in the air like a circus juggler.

To finish a book, writing must have importance. Sure, it takes time I might never get paid for and a dream that only I understand. Some days writing has to be the most important part of my life.

There will be people in your life who have no idea what fuels this need to write. They may insist you’re wasting your time. No one will like your stories. Your books will never sell. Writing is so subjective – it doesn’t hurt my feelings to know someone hates my stories. What hurts my feelings is someone encouraging me to give up my dreams.

I bring up these negative items because writing is a conscious choice. I’d argue that for some of us, writing is both a passion and a curse. Time is a limited resource and we all must decide if our time is better spent writing.

Only you know if the answer is yes.

Tony cleared his throat. “You said your dad was kidnapped?”

“Last night. Coach and my dad were friends. They joined the Army together.” Why was I babbling? Tony didn’t need to know my life story. “I showed up this morning because I thought he might know why these people were after my dad.”

“Did either of them tell you?”

I shook my head and looked at Tony. “The man who beat up Coach Andrews—he said he’d give me a head start before hunting me down.”

Again, Tony glanced in the mirror. “He didn’t happen to say he drives a black Lincoln, did he?”

As I spun in the seat and leaned over the headrest to see, the belt cut into my neck. Behind us, a black car crept closer with every second. Someone in the passenger seat leaned out of the window with a gun. “There’s a man with a gun following us and I’m not freaking out. At least, I don’t think I am.”

With a bitter laugh, I turned back around and dropped down on the red vinyl seat. “Cool? When are you going to ask why I’m not afraid?”

Tony hit the brakes and made a turn that left me choking from the belt’s grip. “Right after you ask why I picked you up.”

C.C. Bolick grew up in south Alabama, where she’s happy to still reside. She’s an engineer by day and a writer by night—too bad she could never do one without the other.

Camping, fishing… she loves the outdoors and the warm Alabama weather. For years she thought up stories to write and finally started putting them on paper back in 2006. If you hear her talking with no one to answer, don’t think she’s crazy. Since talking through her stories works best, a library is her worst place to write… even though it’s her favorite!

C.C. loves to mix sci-fi and paranormal—throw in a little romance and adventure and you’ve got her kind of story. She’s written nine books including the Leftover Girl series, The Agency series, and The Fear Chronicles.

You can follow the Fear Justice Blog Tour here.