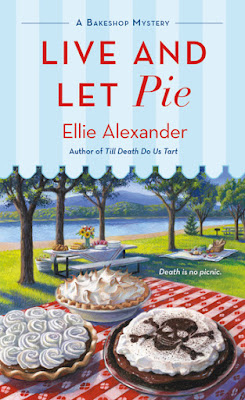 Life is sweet once you step into Torte, everybody's favorite small-town bakeshop. But what happens when it becomes the scene of a crime?

The heat is on for pastry chef, family business operator, and unlikely sleuth Jules Capshaw. Just when she thought she could enjoy some time away from the kitchen, Jules manages to discover a skull during a picnic by the lake. As if unearthing remains that may be connected to a missing-persons case from the 1960s isn't enough on her plate, Jules must contend with the unsolved matter of her own marriage while her estranged husband Carlos sails the open seas, awaiting a verdict. Then there's Jules's bitter landlord Edgar, who is intent on making a sweet deal on a vacant lot down the block from Torte--until he turns up dead. If only Jules could find a recipe that would let her bake her cake and eat it, too...

Ellie Alexander's Bakeshop Mystery series is one of my favorite cozy mystery series. The main and secondary characters are all people I wish were real and that I knew. Honestly, I would love to be able to walk into Torte and just spend hours hanging out.

The ninth installment to this standalone series, Live and Let Pie, finds two young girls stumbling upon a murder from over 50 years ago. It had been thought the victim George Mill died because he refused to leave his homestead during a big flood. However, the discovery of his skull dispels that rumor. Now the police of Ashland, Oregon have to figure out how to solve an old murder case.

As if a cold case wasn’t enough to pique Jules Capshaw’s interest, people in town are arguing over a parcel of land owned by Edgar Hannagan. One realtor wants to buy the land and build tiny houses. An OSF (Oregon Shakespeare Festival) employee wants to build affordable apartments for the actors in the company. A business owner wants to expand the parking lot next to her B&B. There's also the homeless council who wants to put up permanent housing. Edgar seems to be very nonchalant about all of this. When his body is discovered, Jules can't help but wonder if one of the people who wanted his land killed him. There's also the fact that Edgar knew George. Could these two murders be related or is this just a coincidence?

While I enjoyed Live and Let Pie, it doesn't rank as a favorite of the series for me. The first 20% or so of the book felt off. It could possibly be because my favorite character and Jules’ partner in crime solving, Lance took forever to appear in the book. I did love the fact that new employees were added to the Torte staff. After my friend Lance did show up, I was able to relax and simply enjoy the story. Live and Let Pie is a good mystery and I was surprised that my spidey senses didn't go off. Surprise doesn't even begin to explain who the killer was and why. On the romantic front, as a reader, I'm getting a little tired of the Jules and Carlos (estranged husband) situation. I really wish Jules would just decide already if she's going to stay married to Carlos and allow him to move to Ashland or not. I'm looking forward to reading the next book in the series, A Cup of Holiday Fear. Fingers crossed Carlos will be in Ashland for Christmas!