Review ~ ONE NIGHT WITH A MILLIONAIRE by Shannyn Schroeder 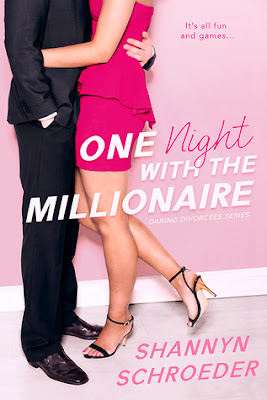 Over-forty, single mom Tess Howland's life is all about caring for other people. Indulging in a one night stand is just what she needs. She doesn't expect to meet anyone she would introduce to her kids, especially not some rich playboy who acts like a big kid himself. Even if he keeps giving her the best sex of her life.

Millionaire Miles Prescott can't get the sexy nurse he met at a fundraising gala out of his head. For the first time ever, he doesn't want a woman with no-strings-attached. He wants everything—even if it comes with a ready-made family with a woman in her forties. Suddenly, helping with homework doesn't sound like the worst thing in the world, especially if it means being near Tess.

But what happens when he’s ready to step up and she says no?

I feel as though I should wax some poetry about One Night with a Millionaire. This was a story that I was into from the very beginning. Tess Howland is a divorced woman with three kids ranging in age from 8 to 14. She’s a nurse who also works as a home healthcare aide. Miles Prescott is from a wealthy family. He’s the least ambitious of his two siblings. His primary job is to figure out where the family and company’s charitable donations go. The St. Mark’s Hospital gala was his father’s favorite charitable event to attend. This year, it will also become Miles’s favorite event after he meets Tess.

The St. Mark’s Hospital gala is the one night in the whole year where Tess can let her hair down and not worry about being a nurse or mom. She loves her job at St. Mark’s PICU, so talking up the department to get donations is no big deal. On this night in particular, Tess is open to having a little grown up fun. She immediately hits it off with Miles and the two eventually find their way up to his suite. Knowing that they can only have one night together, Tess sneaks out of the suite while Miles is asleep. She never expects him to track her down and want to spend more time with her.

I’m looking forward to reading the next book in this series. The hero, Trevor Booth appears in this book and he really seems like a great guy.

**Received a copy of the book through a contest win.**