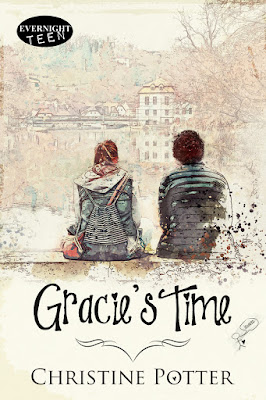 October, 1962
It's almost Halloween, but something a lot scarier than ghosts is on everyone's mind: nuclear war. After President Kennedy's speech to the nation about the Cuban Missile Crisis, Grace Ingraham overhears her parents' plans to keep her safe. She'll be sent off to live with a wealthy uncle—in the nineteenth century.

Gracie's from a family of Travelers, people who can escape into time. Too bad her mom and dad haven't Traveled since their honeymoon trip to the Lincoln Inauguration. So Grace will have to go alone—even though taking a wrong turn can have serious consequences: like heading for 1890, and ending up …in 2018.

Hi Christine. Welcome to Read Your Writes Book Reviews. How are you?
Now that I've got my deskwump of a kittycat out of the tortellini salad I was going to eat for lunch, I'm great—if a little hungry. Ms. Bellacat put her feet in it and stole a tortellini!

Sorry. I’m trying not to laugh, but I’m failing....Now that I’ve composed myself, could you please tell me about your Bean Books series?

The Bean Books started because I was trying to write about a girl in the year 1970 who suddenly discovered she could time travel. I chose the 70's because I knew them well, and when I was still teaching English, my students liked hearing tales about the old hippie days. Bean lives in 1970, but she gets drawn back to various mysterious happenings in the late nineteenth century and the time period around World War Two. When she travels, she disappears to the people in her own time, and it can happen very suddenly. She is also invisible to the people in the times she visits—usually. But sometimes not…

Gracie’s Time is the fourth book in the series. Is this a standalone read?
It can absolutely be read as a standalone. I wanted to bring the series into what a friend of mine calls "the now-now." Unlike the first three Bean Books, this one is first person and has a new main character. But the original characters are there, too. It'll be richer for the people who have read Books One through Three, but it still works. I was careful about that.

Can you please tell me a little bit about the characters we will meet in Gracie’s Time?
As of late October, 1962, Gracie is the daughter of the mayor of Stormkill, NY, a little village in the lower Hudson Valley of New York. Her parents are afraid the Cuban Missile Crisis will lead to nuclear war. Since they are time travelers, the obvious solution for keeping Grace safe is to send her to the 19th century. Problem is, Grace has never time traveled—or Traveled—before. She goes the wrong way and ends up in 2018. Grace is a strong girl who doesn't know how strong she is. She uses her wits to fit into a very strange new world of school shootings, iPhones, and the internet. And she also deals with the forces that pulled her to the twenty-first century. Again—no spoilers.

Father Higbee, mostly known as Amp, his college nickname, is an old hippie who ended up an Episcopal priest. He's a passionate record collector still, and good with the youth of the town, for whom he runs a weekly DJ party called Vinyl Lounge. Amp is an old friend of Bean's from the original books. He is highly gifted time traveler, or Traveler, one who can aid other time travelers on their journeys. But he's also a hovering, completely annoying, dad-joke-making adult who tends to overreact.

Could you explain to me what a traveler is and how one becomes a traveler?
A Traveler is someone who can slip around in other times, observing and sometimes interacting. There are various degrees of being a Traveler. Beginners usually only get to visit other times and observe, and are invisible to the people in those other times. (Although sometimes even experienced Travelers have that happen to them.) One becomes a Traveler by chance; you wake up one day and suddenly flash back to 1759—no warning. Usually, there's a reason for you to see something there, but it'll take a while to figure out what it is. Traveling families also exist. Gracie's family is one of these, and she has inherited her parents' considerable gifts for visiting, and even living in, other times. Worldwide, there is a secret society of Travelers, known only to one another and the non-Traveling loved ones surrounding them.

Could you sum up Gracie’s Time Twitter style for me?
Gracie Ingraham isn't supposed to have an iPhone or a puffer coat or even a color TV. That's because she comes from 1962. Her time-traveling parents tried to stash her in the nineteenth century to keep her safe from the nuclear war they feared. But the war never happened and Gracie ended up in 2018! #oops

What sort of research do you do for your books?
I keep a browser open all the time to check the dates of important events and to look at the fashions of the time. When I'm writing about the sixties and seventies, I can remember. But when I'm writing about the 1890's, it's important to know how the necklines of dresses looked. There are some amazing videos put out by a woman who loves to collect antique Victorian clothing that I've wasted way too much time with. I often go to Circa, a real estate website that is all old houses, for setting inspiration. I try really hard to get the medical stuff right, too—nothing bugs me more when I'm reading than to have a character get dropped down a cliff and walk away with a sprained ankle. Trauma Fiction on Facebook is a valuable resource for getting those sorts of questions answered. I also listen to videos of music frequently, and check track lists on albums.

Gracie is thrust into a situation she is ill-equipped for, however, she seems to manage okay. Tell me what you love and or admire about her.
Gracie is a good girl. She follows the rules and is polite and unassuming. She's not the kind of kid who gets invited to parent-free keg parties. But she's made out of steel, really, and that's what I like about her. Lost in time (and she is), she mourns her family but still trusts the world enough to make new friends. She's also a bit of an egghead, like me, and I like that. She says words that sound cool out loud. A favorite of hers is "obelisk."

As mentioned, your Bean Books deal with time travel. If you could travel in time where would you go and what would you hope to do there?
Oh, man—so many places! I'd like to go to The Roxy, a big old movie palace in New York City, in the twenties. There was a stage show plus films there then, and a giant pipe organ. I'd like to have a cocktail at the Dorothy Parker era Algonquin Hotel. I'd like to see what Nyack, New York, where I lived for years, looked like in the 1880's. I live in a house near there now, but not in town, and it's OLD—built in 1740. I'd like to see exactly what was going in in the room I'm typing these words—in say 1790.

That could definitely be interesting. What’s next for you and this series?
I'm working on that. If Gracie does well, I think she'll get some more books.

Christine, I have to say I love the covers for this series. Thank you so much for answering some questions for me.
Jay Aheer, the illustrator for Evernight Teen, is the best in the business, bar none. My fondest hope is that my books are as good as her covers.

I heard a snoring sound in the sky then, but it was only a plane. For a moment I thought about how terrible it would be if a nuclear war started right that minute, before I could escape to the past. Then I thought about Mom and Dad. I hoped they’d come get me from the 1890s if there weren’t a war. I didn’t want them to die. I didn’t want anyone to die. I really wanted there to be a future.

Mr. Mahoney and I walked past the train station and out onto the empty platform. He looked over his shoulder to be sure no one was around. “Are you ready?” He took my hands, squeezed them, and then he let go. “It’s the right time and place! Go on back, Gracie!”

At first, I thought nothing had happened, except then it wasn’t evening anymore. It was morning—and certainly not the 1890s. Nobody named Augustus introduced himself to me.

Dad always told me that if you get confused when you Travel, you should always look at what kind of lights there are in buildings and what clothing people have on to help place yourself. But what I saw only confused me more.

A freezing wind came off the river and cut right through my corduroy jacket. People in puffy grey and brown overcoats stood in clumps, staring at what I first thought were really tiny transistor radios. I learned that same day those things are called smart phones. I’d missed the 1890s by over a hundred years—and in the wrong direction.

A sleek, silvery train roared into the station from the north and everyone got on it but me. Bingo, the future! I’d just broken one of the biggest Rules there is. 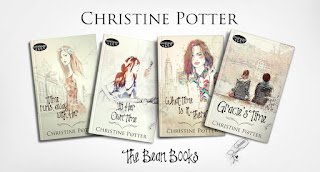 Christine Potter lives in a very old, haunted house, not far from Sleepy Hollow. She’s the author of the time-traveling Bean Books series, on Evernight Teen: Time Runs Away With Her, In Her Own Time, What Time Is It There? and Gracie’s Time. She’s also a poet, with several books in print (the most recent is called Unforgetting). Christine loves all kinds of music, DJ’s, and plays dulcimer and guitar.