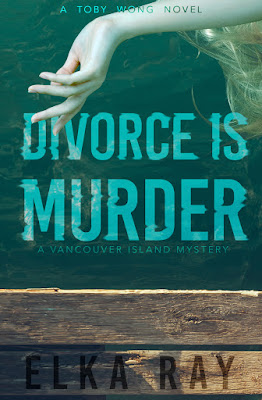 As teens, they bullied her. Twenty years on, she's not scared of them. Except she should be...

After returning to her quiet hometown to care for her ailing mom, divorce lawyer Toby Wong is hired by Josh Barton, a guy who broke her heart as a teen at summer camp. Now a wealthy entrepreneur, Josh wants to divorce Tonya, the mean girl who tormented Toby all those years ago. When Tonya is found murdered, Josh is the prime suspect.

Together with her fortune-teller mom and her pregnant best friend, Toby sets out to clear Josh, whom she still has a guilty crush on. As she delves deeper into Tonya's murder, Toby keeps running into catty ex-campers she'd rather forget. Are her old insecurities making her paranoid? Only too late does she realize she's in danger.

Hi Elka. Welcome to Read Your Writes Book Reviews. How are you?
I'm great, thank you. And happy to be here.

I’m so glad. Congratulations on the release of Divorce is Murder. I’ve seen Divorce is Murder described as a romantic suspense, as a mystery romance, and as a cozy mystery. What classification would you give it and why?
I'd call it a romantic mystery. There are actually two mysteries. Who killed Tonya, the girl who tormented the main character, Toby Wong, as a teen? And what did Tonya do to leave Toby so traumatized? As for romance, there are two love-interests too. Tonya's ex husband, Josh, whom Toby has idolized since she was a teen, and Colin, the handsome detective charged with finding Tonya's killer.

Divorce is Murder is the first book in your Toby Wong: Vancouver Island Mystery series. What can readers expect from this series?
More murders! They can also expect Toby's confidence to grow as the series progresses. She finds love and she finds her place, back in the home town she couldn't wait to leave.

Tell me about Toby Wong?
Toby is a divorce lawyer - a job she chose after seeing how her own mom struggled, when her dad left them. Having been bullied as a kid, she's always on the side of the underdog. She's little but fierce when it comes to protecting others. Yet she's also her own enemy - constantly doubting herself. I think a lot of women are like this. We judge ourselves much more harshly than we'd ever judge others.

What can you tell me about Divorce is Murder?
I set Divorce Is Murder in the town where I grew up, Victoria, B.C., on Canada's beautiful Vancouver Island. It's a big tourist town thanks to its gardens and stunning coastal scenery. There's something about setting crimes in idyllic venues that appeals to me. When things look too good to be true they often are. Don't you wonder about those places that look picture-perfect? What's lurking beneath the manicured surface? Sometimes, men are the same. Is Toby's long-ago teenage crush, Josh, too flawless?

Obviously, Josh Barton plays a large role in this story. What can you tell me about him and what he’s been up to in the twenty years since he last saw Toby?

Toby fell for Josh when she was an awkward teen at summer camp. In the intervening years, Josh moved to the States and struck it rich with some tech startup. He also married Toby's teenage nemesis, chief meangirl, Tonya Cabrilatto. Of course Toby feels bad that she still wants the guy. Firstly, he's her client. Secondly, how can you justify wanting someone capable of marrying a monster like Tonya?

When you first sat down to write Divorce is Murder, what was the first thing you had to figure out?
In my first draft, this story was for Young Adults. But adult Toby kept creeping in. I kept wondering: What happens to meangirls when they grow up? This book was my answer.

What do you think Toby would say about you as her writer/creator?
Toby's too busy beating herself up to give me a hard time. Her best friend, Quinn, however, might give me a good telling off for putting Toby in such danger. Toby's fortune teller mom, Ivy, would surely recommend some crystals to keep me, Toby and all and my fictional creations from further harm.

What’s next for you?
The next Toby Wong Vancouver Island Mystery book is in progress. In this one, the best friend of Toby's mom - a wealthy socialite who met someone online - goes missing.

I'm also working on a darker psych suspense story. I like to mix things up between light, fast-paced mysteries like the ones with Toby Wong, and much darker thrillers.

Elka, thank you so much for taking the time to answer some questions for me.
Thank you for your time and interest!

Colin peers into the empty parcel, then sticks two fingers inside. He pulls out an envelope-sized slip of paper and lays it onto the table. Although the words are facing the wrong way, I have no trouble reading it. Fashioned from letters cut out of newspaper, the note reads: LEAVE VICTORIA, BITCH.

Tonya had received a similar note with her red-paint-flecked Barbie doll.

A muscle in Colin’s jaw jumps. He looks angry. “Who could have sent this?” he asks. “Do you have any bitter ex-boyfriends? Guys you might have rejected? Anyone who came on too strong?”

I shake my head. I’d rather not tell Colin that it’s been nineteen months since my last date, with a guy I met in a Toronto doctor’s office who spent our entire date describing—in vivid detail—his recent hernia surgery.

“How about social media?” asks Colin. “Are you active on dating sites? Have you gotten any similar sorts of messages. Anyone seem obsessive? This kind of stuff can start online and then escalate.”

Again, I say no. My few attempts at internet dating were so lame I swore never again. The real world is weird enough. “There’s nothing like that.” I survey the bra, wishing the label weren’t sticking out, those double AAs on full display. “But it’s my bra,” I admit. I explain how, just last night, it vanished from my building’s communal laundry room.

Colin’s frown deepens. “Last night? That means whoever sent this was in your building.” He tugs at his collar, clearly agitated. “This isn’t good, Toby."

Elka Ray writes fast-paced romantic mysteries and scary thrillers - a dichotomy that reveals her belief in Yin and Yang, or the balance of opposites. A great lover of scientific facts, she may be found clutching crystals for good luck; reads highbrow journals and tabloid trash; and refuses to watch romcoms yet moved in with her now-husband on their first date.

Elka is the author of three novels – the romantic mysteries DIVORCE IS MURDER and HANOI JANE – and the noir thriller SAIGON DARK. She also has a collection of short crime and ghost stories set in Southeast Asia – WHAT YOU DON'T KNOW. Elka lives with her family near Hoi An, Vietnam. She is represented by Folio Literary Management.

You can follow the Divorce is Murder Blog Tour here.

a Rafflecopter giveaway
Follow
Posted by Kim at 2:08 AM