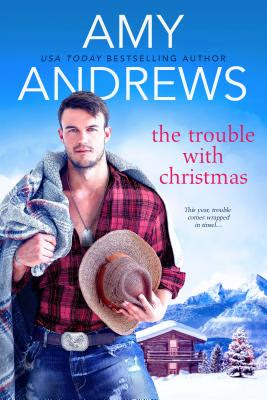 All Suzanne St. Michelle wants is an over-the-top, eggnog-induced holiday with her best friend in Credence, Colorado. But when her hoity-toity parents insist she come home for Christmas in New York, she blurts out that her sexy landlord is actually her boyfriend and she can’t leave him—Joshy loves Christmas. The more twinkle lights the better.

Rancher Joshua Grady does not love Christmas. Or company, or chatty women. Unfortunately for him, the chattiest woman ever has rented the cottage on his ranch, invited her rich, art-scene parents, and now insists he play “fake rancher boyfriend” in a production of the Hokiest Christmas Ever. And somehow…she gets him to agree.

Apparently, he’ll do anything to get his quiet life back. At least there’s mistletoe every two feet—and kissing Suzy is surprisingly easy. But in the midst of acres of tinsel, far too many tacky Christmas sweaters, and a tree that can be seen from space, he’s starting to want what he lost when he was a kid—a family. Too bad it’s with a woman heading back to New York before the ball drops…

3 dislikes in no particular order: Christmas, company and chatty women

Favorite song: I don’t have time to make listicles of my favorite things but it’d be something country.

Favorite way to spend an evening: Sipping a beer on my porch after a long day on the ranch.

Best memory to date: A crazy city chick turning up at the ranch in the Scooby van and a pair of completely impractical Uggs.

Funniest/Strangest thing that has ever happened to you: Having my life turned into a production of the hokiest Christmas ever while faking a relationship with said city chick who bribed me into the whole crazy scheme.

If you could have a do-over, what would you do differently? Stop my parents from going out on that icy road all those years ago.

What’s something you’ve said you would never do, but in fact have done? Wear a ridiculously awful Christmas sweater into town.

Most romantic gesture: Telling a crowded room at Annie’s diner that I’d screwed up and I loved Suzanne St Michelle.

Sucking in a quick, deep breath, she ripped the Band-Aid straight off. “My parents, who are coming to visit, may be under the impression that you and I are romantically involved and living in sin in this cabin and that you are wild about Christmas, so much so that the place looks like something out of a Hallmark movie with enough tinsel and lights to be seen from space, and there’s mistletoe everywhere because you can’t keep your hands or lips off me.”

Grady stood perfectly still. Suzanne knew this because she snuck a peek at him from among the fluffy strands of her hair that had fallen forward. Then slowly, very slowly, he lowered his glass to the bench. It made a slight muffled tink as it met marble, which clanged as loud as a ringing bell inside her head.

She’d have rather he’d banged it down and splashed wine everywhere than this controlled kind of calm.

“You told them what?”

“I’m sorry, Grady,” she said, daring to meet his gaze now, hoping she’d be able to convince him it’d been a tiny white lie that had escalated out of control. His green eyes sliced into hers like razor blades. “I’d told my mom I wasn’t coming home for Christmas, and then she said fine, we’ll come to you.” She beseeched him with her eyes, trying to impress upon Grady how much that idea sucked. “So I panicked and told a little white lie about me coming to Credence to be with you because I can’t take another minimalist Christmas, Grady, I just can’t, and I thought telling them I was shacked up with a guy who goes the full Griswold wouldn’t just stop them from coming but send them screaming in the other direction…”

Drawing breath, Suzanne picked up her glass and swigged another gulp of wine. She was aware of every beat of her heart reverberating against her pulse points.

“But it didn’t,” Grady supplied, his face like stone—hard and unmoving except for the tick of a nerve at the angle of his jaw.

It was a low, measured, reasonable demand, but Suzanne had dug herself too big a hole now. She’d totally fucked it up, and unfucking it without making herself look like some deranged chick who was so desperate for a man that she was fabricating a relationship was impossible. Self-preservation was a sucky reason to be hiding behind her lie, but she didn’t want her parents to start wondering about the state of her relationships—or her mind, for that matter—when they had enough to be worrying about with their own relationship.

And who knew, maybe being around a newly in love couple would help her parents to find their own magic again? The focus had to be on her parents now, so it was just easier to go through with the farce than walk it back. If he agreed. If he didn’t, she’d have to fess up and wear the consequences, but seriously…how hard could it be?

She glanced at Grady’s forbidding face. Impossible by the looks of it.

“Or…” she said, her voice wobbling, betraying just how much was riding on his agreeing to the fake relationship. “And, just hear me out here…we could pretend that it’s true.”

His jaw did that clenching and unclenching thing again. “And why in the hell would I do that?”

“Because it’s Christmas, and neighbors help each other out, especially at Christmas.”

Grady bugged his eyes disbelievingly. “You want your drive shoveled? I’m your guy. You want a cup of sugar? Sure thing. You want me to play fake kissy-kissy under the mistletoe in front of your folks?” He shook his head. “Hell no.”

Amy is an award-winning, USA Today best-selling Aussie author who has written seventy contemporary romances in both the traditional and digital markets. Her books bring all the feels from sass and quirk and laughter to emotional grit to panty-melting heat. She loves frequent travel, good books and great booze although she'll take mediocre booze if there's nothing else. For many, many years she was a registered nurse. Which means she knows things. Anatomical things. And she’s not afraid to use them! She's just moved back to her central Queensland roots taking a sea change in the pretty little coastal town of Yeppoon where she gets to stare at the ocean all day.