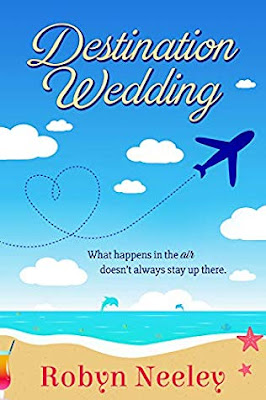 What happens in the air doesn’t always stay up there.

CEO Luke Cannon has just traded seats with his identical twin. Little did he know that an innocent kiss while pretending he was his brother would soon create havoc.

What happens in the air doesn’t stay up there. Once on tropical land, Kate believes that the handsome stranger who gave her the best kiss of her life is now her new client, Drew Cannon, fiancé to the beautiful and wealthy Lauren Kincaid. While Kate struggles with the intense feelings she thinks she has for Drew, Luke discovers Kate’s been hired to plan his brother’s destination wedding. He also realizes the initial sparks they shared 30,000 feet up are now mistakenly aimed at Drew.

Can Luke get Kate to realize that the feelings she has are for him? He’s got forty-eight hours in paradise to try.

Imagine having to endure a twelve-hour flight from New York to Hawaii. Keeping your imagination going, add in that you hate flying. I mean, not just hate flying but that you are scared to death of flying. Throw in some major turbulence and you have the recipe for disaster. Welcome to the world of Kate Ashby. Kate Ashby is the senior wedding planner for Tie Your Knot. She has just been given the career opportunity of a lifetime. If she can pull off planning the wedding of Drew Cannon and Lauren Kincaid in three weeks, she will receive a commission which matches her yearly salary and is a shoo-in to become a partner at the company.

Luke Cannon is the acting CEO of JDL Toys. He is accompanying his identical twin brother Drew to Hawaii as moral support and to help him plan his wedding. Drew, for whatever reason, waits until the last minute to purchase plane tickets. Thus, he takes the only remaining first-class seat and puts his brother in coach. Once Drew realizes how crazy the woman sitting next to him (Kate) is, he convinces Luke to change seats with him. When Luke switches seats with Drew, he neglects to tell Kate that he isn’t Drew. As a way to get Kate to relax he gives her alcohol and then kisses her, leaving Kate to think she just had the best kiss of her life from a man named Drew.

Once they land in Hawaii, Kate realizes that Drew is the groom for the wedding she’s there to plan. She thinks he’s the scum of the earth and so the fun for Kate, Drew and Luke is just getting started.

Destination Wedding is humorous, to say the least. I mean REALLY!!! A lot of stuff could have been avoided if Luke was just truthful the first time he and Drew saw Kate together. For that reason, I found this story to be irritating. I mean Luke comes up with all of these scenarios for Kate to fall for him and not Drew, but NOTHING goes according to plan. Kate just falls more in love with Drew. Add in the entertaining cast of secondary characters and you have a book worth reading.

The book went from being an enjoyable read to me really liking it. But unfortunately, the book went on longer than I thought it had to and it went back to just being enjoyable. In the end, I’m glad that I read the book.