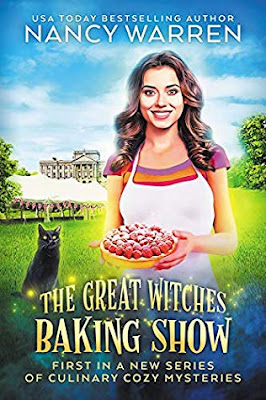 A baker with secrets
Witches in trouble
The cameras are rolling
Ready, set, die.

Poppy Wilkinson is thrilled to be chosen as a contestant on The Great British Baking Contest. As an American with English roots, winning the crown as Britain’s Best Baker would open doors she’s dreamed of. In more ways than one. Appearing on the reality show is her chance to get into Broomewode Hall and uncover the secrets of her past.

But strange things are happening on the show’s set: accusations of sabotage, a black cat that shadows Poppy, suspiciously unsociable residents at Broomewode Hall—and the judges can be real witches.

There are murmurs that Broomewode is an energy vortex. It certainly makes Poppy see and do things that aren’t exactly normal, and seems to draw interesting characters to the neighborhood.

When a fellow contestant dies in mysterious circumstances, Poppy has more to worry about than burned pies and cakes that won’t rise. There’s a murderer on the loose and it’s up to Poppy and her new friends to solve the crime before it becomes a real show-stopper.

From USA Today Bestselling Author Nancy Warren, this delicious series of cozy paranormal mysteries will have you guessing until the end. Includes recipes.

Nancy Warren’s The Great Witches Baking Show got off to a really, really slow start for me. I'll admit that at times I wanted to put the book down. I’m glad that I stuck with it.

Poppy Wilkinson is a twenty-something-year-old American who was born in Britain. Her background isn't that simple. Poppy was left in a box as an infant on the doorstep of a bakery. She was adopted by a couple who later moved the family to the United States. Poppy's origins are unknown. The only thing she has that could possibly lead her to her birth parents is the blanket she was wrapped in.

Poppy loves to bake and is pretty okay for a home baker. Her skills land her on the British baking show, The Great British Baking Contest. Poppy isn’t on the show to showcase her skills, make a name for herself, or win the top prize. Poppy’s sole purpose for being on the show is because it’s filmed at Broomewode Hall. During an earlier season on the show, one of the owners of the property gave a behind the scenes tour. Poppy spotted a portrait of a lady wearing a shawl that closely resembled her baby blanket. Poppy is sure that if she can get into Broomewode Hall she’ll be able to find out more about her birth family.

The first episode of a new season is being filmed over a weekend at the manor, with the twelve contestants staying at a nearby hotel. Before the weekend of filming is over, Poppy will have a horrible encounter with a resident of Broomwode Hall, stumble upon the dead body of a fellow contestant, see and communicate with a ghost, oh and be told she’s a witch. Not much to take in at all.

There’s a long list of characters which means when the murder happens there’s a long list of suspects. Luckily, not every contestant is mentioned by name. The mystery was in my opinion extremely good. There were several red herrings. In the end, the big reveal was dramatic and I loved every second of it.

The series continues with the remaining contestants returning to film the next episode. I get the impression that Poppy’s looking for her birth mother and her continuing to embrace her new witchhood is something that will play out over the course of the series.